Japan and the politics of guilt 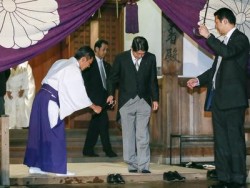 With the election of the new government, the voices of denial are heard again at the highest levels, and are resonating with the public, including the young, in ways that would be unthinkable, by contrast, in modern Germany. All of this is fuelling nationalist sentiment in China and South Korea, and making even more dangerous the already volatile territorial disputes in the East China Sea and the Sea of Japan.

It may be, as some Japanese colleagues tell me, that newly elected Prime Minister Shinzo Abe, despite his deeply conservative nationalist background and instincts, is ultimately a realist who will do what it takes — no doubt with the help of pressure from the United States — to defuse these tensions. But there are three specific talismanic issues on which he and his colleagues have taken worrying positions, jangling regional nerves.

The first is the long-running saga of an appropriate apology for Japan’s initiation and conduct of aggressive war the years before and during World War II. For many years, the affected countries sought a comprehensive and unequivocal apology; as Australia’s foreign minister from the late 1980s, I pushed hard for it in Tokyo, as a form of closure that was morally right and in Japan’s own interests. Eventually, on the 50th anniversary of Japan’s defeat in 1995, Prime Minister Tomiichi Murayama responded with personal language of both ‘deep remorse’ and ‘heartfelt apology’.

Most subsequent leaders have repeated these sentiments in various degrees — albeit never to the complete satisfaction of China or South Korea. But, after his landslide election victory last month, Abe told the newspaper Sankei that he would seek to replace the landmark 1995 statement — ‘issued by a Socialist prime minister’ — with a ‘forward-looking’ statement, the content of which he did not describe.

The second issue is that of a specific apology to the ‘comfort women’ — from many countries, including my own, but especially South Korea — who were sexually enslaved in army brothels. Then-Chief Cabinet Secretary Yohei Kono broke the ice in 1993, expressing ‘sincere apologies and remorse’ to all those who had ‘suffered immeasurable pain’.

But Abe and several of his colleagues have gone on the record over the years — including during Abe’s first term as prime minister in 2006–07 — denying that coercion was involved. In 2007, his national security adviser told a colleague of mine, ‘All of this is the work of Korean leftists: there’s nothing to it’. Now, in January 2013, Abe’s chief cabinet secretary, Yoshihide Suga, has said that experts would be invited to study the basis of Kono’s statement.

Finally, there is the issue of the Yasukuni Shrine to Japanese war dead, which records in its ‘Book of Souls’ 14 A-class war criminals, and contains a museum that glorifies Japan’s conquests as ‘just wars fought for survival and self-defense’ or for the ‘liberation of Asia’.

Abe has been a regular visitor to Yasukuni. He visited it again last October, after being elected LDP leader, and expressed ‘bitter grief’ during the election campaign that he had not done so during his previous term as prime minister. It has been reliably reported that he wants to visit the shrine while in office this time. Fourteen of his 19 cabinet members are reported to belong to a group promoting pilgrimage tours to the site.

Compounding these concerns is evidence that Japanese public opinion is sympathetic toward the positions that Abe has taken or seems to favour. In a Jiji Press opinion poll conducted in January, 56.7 per cent of those surveyed believed that Abe should visit Yasukuni now — up significantly from 2006, when 43 per cent took a similar position.

There are, of course, always two sides to these stories. It is possible to argue — as many Japanese do — that much of the negative reaction by Japan’s neighbours has been driven by cynical nationalist considerations. Campaigners for South Korean comfort women, for example, have often failed to acknowledge the number and intensity of the statements that have been made on this issue over the last two decades, and the amount of compensation on offer. Likewise, China may have set the bar too high concerning the language that it has demanded in any general apology.

But, even before Abe’s latest wavering, there is much more that Japan could have done long ago — and which it should still do — to put its position beyond reasonable criticism. The benchmark 1995 Murayama apology remains a personal one, because the Japanese Diet, then and since, would not agree to anything as strong: a ‘deep feeling of remorse’ was as much as they could muster, and even then 241 members abstained. Moreover, Murayama’s statement referred vaguely to ‘a certain period in the not-too-distant past’, rather than to specific war years, and others have since resisted phrases — for example, ‘war of aggression’ or ‘colonial rule’ — that Japan’s neighbours have not unreasonably sought.

The more fundamental problem is that Japan seems unable, as a nation, to manage the kind of collective psychological shift that has transformed Germany, with which it is inevitably compared. Apologising sincerely for the sins and omissions of earlier generations is never easy. Australia had a long national debate before we could say that we were sorry for the horrible past mistreatment of our Aboriginal people, particularly the ‘stolen generations’ of Aboriginal children who were regularly taken from their parents by governments until the 1970s.

But statesmen, if they are to deserve the name, sometimes must take the politically uncomfortable high ground — and then bring their publics along. Leadership of that quality has been a long time coming in Japan.

Gareth Evans is Chancellor of the Australian National University and Co-Chair of the Global Centre for the Responsibility to Protect.
This article was originally published on Project Syndicate.