Indonesia’s role in ASEAN and the EAS 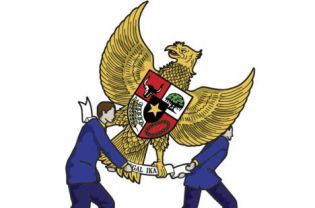 Read more http://kerrycollison.blogspot.com.au/
The political and economic situation in Southeast and East Asia has forced Indonesia to clearly define its relationship with ASEAN and the East Asia Summit (EAS).
Indonesia needs to develop a more cooperative stance and transform its traditional diplomatic approach to a more pluralistic one. It has to use its resources to make sure that ASEAN’s position is strongly represented in the EAS. This endeavour will be successful when Indonesia is able to unite its NGOs, business community and public on the domestic stage, and consolidate ASEAN centrality by fostering ASEAN integration on the regional stage. The complexity of regional challenges requires that all ASEAN and EAS member countries work toward deeper integration — and Indonesia has an important role to play in this process by fostering closer engagement between these two regional bodies.
Indonesia needs to build a stronger relationship between domestic actors if it is to strengthen its position in ASEAN. The government can organise domestically a ‘collective position’ for Indonesia and select prime issues that need to be discussed with non-state actors, including civil society organisations, universities, trade unions and the business community. It could also develop a foreign policy forum where government and non-state actors can debate and clarify their position in ASEAN. This forum should be a place to discuss forthcoming ASEAN and EAS agendas and to develop an effective Indonesian foreign policy.
Regionally, Indonesia is well placed to persuade other ASEAN countries to maintain the organisation’s unity when dealing with intra-regional issues, and when dealing with external partners. Indonesia needs to minimise the division between ASEAN countries by reminding them of ASEAN’s centrality in Asia’s regional architecture. In particular, Indonesia could work to ease tensions over the South China Sea dispute. The Trans-Pacific Partnership (TPP) is another potential source of division for ASEAN countries, because several member states are party to this agreement, while others are not. Indonesia needs to work with other ASEAN countries to strengthen the ASEAN Framework for Regional Comprehensive Economic Partnership (RCEP). The objective of this framework is to deepen existing free trade agreements between ASEAN and its counterparts, and ASEAN will need to manage its centrality within these various regional agreements.
The development of ASEAN centrality requires ASEAN regional integration, for which the realisation of the ASEAN Community is an ongoing project. But the division of ASEAN countries can still derail this project. Indonesia can promote an equitable distribution of the advantages — from both intra-regional cooperation and external economic relations — to all ASEAN countries in order to assist the integration process. Indonesia should also use its diplomatic power to remind other ASEAN countries about the risk of divergent positions between ASEAN member states, which could jeopardise the regional integration process.
ASEAN centrality and regional integration are crucial to developing the EAS. Indonesia should use cooperative engagement to ensure the centrality of ASEAN in the EAS and to foster ASEAN regional integration for effective cooperation between the two bodies. ASEAN should not lose its position as the driving force behind the EAS. Indonesia can act as an important interlocutor between ASEAN and the EAS in trying to find the best solutions for common regional challenges, including the South China Sea issue, competition between the RCEP and the TPP, and attempts to close the development gap between nations in Southeast and East Asia.
The combination of a free and active foreign policy and Indonesia’s commitment to maintaining a dynamic equilibrium across the region could strengthen ASEAN’s position as a centre of regional cooperation. These efforts should be based on the principle of the Axis of Symmetrical Interests. The United States, Russia, New Zealand, Japan, South Korea, China, Australia and India are likely to respect ASEAN norms, practices and rules of engagement that are based on symmetrical political and economic interests. By supporting ASEAN’s regional integration, these countries will also help to realise the East Asia Free Trade Area and the Comprehensive Economic Partnership in East Asia.
Indonesia can strengthen ASEAN’s role as a neutral stabiliser by helping to manage political and economic cooperation between ASEAN and its counterparts. Deep engagement between ASEAN and other East Asian countries is becoming an essential part of tackling complex regional challenges and must be fostered in the coming years.
Beginda Pakpahan is a lecturer at the University of Indonesia, Jakarta, and a researcher at the University of Edinburgh.