Singapore's Leash on the International Media 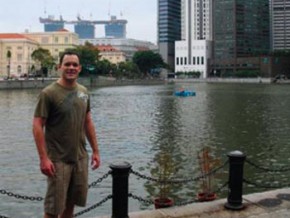 The way in which major western news organizations are beholden to a Singapore government which keeps them on a tight rein while giving them favorable tax and other commercial incentives is being shown up by the reportage on the death in Singapore last year of a young American researcher.

This story was finally broken open by a three page investigation carried in last Saturday's Financial Times that raised serious doubts about the death of Shane Todd, 31 who was found hanged in his home in Singapore shortly before returning to the US for a new job. The death was deemed suicide by the Singapore pathologist but the family claims he was murdered and the Singapore police say they are "still investigating".

Todd had been working at the government-financed Institute of Micro Electronics (IME) in Singapore and was an expert in Gallium Nitride, a semiconductor material with important military as well as commercial applications. He had just quit IME and was moving to a new job in the US. The FT story said that Huawei was involved in IME research. IME is run by an American of Chinese origin.

The FT story was primarily written by Raymond Bonner, a former New York Times staffer with a long and distinguished history of investigative reporting in Asia as well as the US. It was a puzzle to many readers that Bonner's outlet for this story was the FT and not a leading US media such as the New York Times, Bloomberg or the Washington Post.

However, the issue is gradually becomes a little clearer as it is revealed that other news organizations have been sitting on the story for months, cowed into silence for one reason or another.

Reuters news agency followed the FT with its own story but led with a denial by Chinese electronics giant Huawei that it had any dealings with IME and said it had been unable to contact Todd's family for comment on the FT article. However it acknowledged that it had interviewed the family a few weeks after the death and was presented with evidence of cover-up of a murder. The parents had told Reuters then that Todd had been scared: "I had been talking to him for months for at least an hour every week and he told us he was afraid of being murdered," the mother siad.

Out of deference to Singapore authorities, Reuters chose not to report any of this.

The extent to which other media such as the New York Times knew the story but declined to run it is unclear. But the NYT has a long-established reputation for kneeling before the Singapore government, for example in 2010 publishing a groveling apology for a reference to "dynasty" in the context of Singapore's political succession - as though Lee Hsien Loong were not the son of Lee Kwan Yew.

The long media blackout on the story has been matched by apparent indifference to it by the US authorities. It is unclear whether they do not wish to embarrass Singapore, which cooperates in many military projects. Or do not want to own up to the fact that China has been using Singapore as a back door to acquiring US technology.

In any event the story raises many questions and is unlikely to go away. Even if Todd really did kill himself, the performance of the Singapore authorities has left many questions, some of which may never be answered. Asia Sentinel