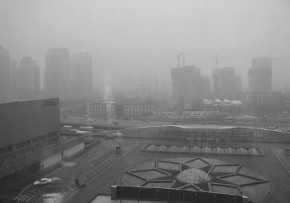 Smog enveloping China's cities could be a metaphor for its dangerous, unsustainable growth
A popular app on smartphones in Beijing is the US Embassy's Air Quality index measurement. No wonder: Until last year, even as the air in China's capitol has increasingly come to resemble that of an airport smoking area, its ruling elite have refused to make public its air-quality levels or even admit a problem. The levels of the nasty particulate PM2.5 - which measures 2.5 microns or less, small enough to enter lungs and bloodstreams - are some 40 times higher than the 25 micrograms per cubic meter deemed an acceptable level by the World Health Organization.

The entire city of Beijing is choking on its success, subjected to air quality that's the equivalent of smoking two packs a day.

Air quality is so bad that the Beijing government temporarily shut down more than 100 factories and ordered many government vehicles off the streets. According to a recent New York Times report, Beijing has reached new records for pollution, "beyond index" measurements, according to the US Embassy Twitter account. Moreover, such pollution is surging all over northern China. Complaints have gone viral in China's blogosphere, with even state news media reporting it.

Putrid boom
The putrid, poisonous air is an apt metaphor for the current Chinese predicament and challenges facing China's new leaders: The state-centric economic model is unsustainable, exceeding the limits of utility. China's citizens are paying a steep environmental price for breakneck development over the past 34 years - and increasingly question the legitimacy of a political elite and policies lacking in transparency and accountability.

Beijing is not alone. Consider that China features seven of the world's 10 most polluted cities, and then game out a new wave of urbanization over the coming generation projected to add 350 million more to the country's urban population. By 2025 there will be 221 Chinese cities with a million or more people living in them - well connected with smartphones. By comparison, Europe has 35 cities with 1 million or more.

China's rapid urbanization contributes to continuing growth of energy demand, which helps explain why despite large-scale investments in nuclear power, wind and solar, 70 percent of its energy still comes from coal, a percentage that's remained steady over the past two decades. The smog encapsulates many core problems that must be overcome to keep China on a growth trajectory to meet the needs of its citizens, particularly a growing middle class. In a rare bit of candor, Wang Yuesi, an atmospheric physicist and member of a government working group on haze reduction, told the Financial Times that "coal burning and car emissions" interacting with a particular weather pattern were the immediate cause of the problem. Remarkably, Wang added, "Only if reform of the political system is put on the agenda will the economic system and the [environmental] management system be able to catch up."

Xi Jinping and his colleagues are all too aware of the depth of problems facing China, of which the smog is so emblematic. China's state-centered, investment-driven export growth model is clearly one of diminishing returns.

Something has to give
This was the premise of China 2030, a report last year co-sponsored by the World Bank and the Chinese State Development and Reform Commission, a leading policy body. China 2030 outlines the sweeping reforms necessary if Beijing is to realize its goal of becoming "a modern, harmonious, created, and high income society."

As the report states, "Realizing China's vision for 2030 will demand a new development strategy" - one that requires strengthening the rule of law, with a greater role for private markets and "increased competition in the economy." Importantly, the strategy argues that "reforms of state enterprises and banks would help align their corporate governance arrangements with the requirements of and permit competition with the private sector on a level playing field."

The strategy also argues for a new direction of "green growth," viewing environmental protection and climate-change mitigation not as burdens, but as growth opportunities. Beyond the toll on public health, it's estimated that environmental damage accounts for roughly 5 percent of annual GDP loss.

Although incoming President Xi and many in the standing politburo are viewed as likely reformers, thus far there are few signs of a sea change in China's approach to development. The Chinese political elite are part of a wide network encompassing those who lead state banks and state-owned enterprises. Thus, it's no surprise that China's major state-owned oil companies have lobbied against enforcing higher fuel-efficiency standards, even as the number of autos in Beijing has jumped from 3 million in 2008 to more than 5 million in 2012.

This is the dilemma for China's leaders, who know they must pursue far-reaching reforms that will have no small impact on the endemic corruption and the perquisites that come with Communist Party membership and government jobs, which benefit much of China's upper echelon. But leaders appear somewhat perplexed as to how to implement specific new policies, navigating between competing interest groups. Instead, recent efforts to keep economic growth in the 7 to 8 percent range have involved more stimulus spending, with state banks funneling renminbi to Chinese state-owned industry.

The price to pay
Over time, such behavior will only make growth and reform that much more difficult. These internal dilemmas may help explain Beijing's assertive, nationalist actions over disputed islets in the East China Sea with Japan and the South China Sea with the Philippines, Vietnam and Malaysia. The maritime disputes may be a popular short-term distraction, but won't alleviate pressures for change.

However, at the end of the day, the legitimacy of the Communist Party has been based on performance. And more than three decades of double-digit economic growth have been part of a successful social contract. But the price of breakneck growth has been enormous environmental damage, growing inequality and a development model that has run its course. In the face of 400 million internet users and increasing access to smartphones, ubiquitous social media sites and blogs, Beijing confronts a credibility and accountability crisis on a near daily basis.

In a sense, China and the US face somewhat similar challenges. The China 2030 report could represent Beijing's version of the report from the bipartisan Simpson-Bowles Commission, appointed by President Barack Obama, which proposed in 2010 a broad array of tax, budget and entitlement policy reforms that have been met with a stony silence from both the Obama administration and congressional Republicans. Both major powers understand the challenges awaiting them, but find it extremely difficult to contemplate, let alone implement, the actual steps required.

One suspects that sooner or later both Beijing and Washington will likely gradually take on reform steps in a piecemeal approach. Former Chinese leader Deng Xiaoping described his approach to reform as, "crossing the river by feeling for stones." That pragmatism is likely to be followed by his successors, but whether they can do so and keep China's economic wheels turning sufficiently, let alone without making it still more difficult to breathe, is another question. YaleGlobal Online

(Robert A. Manning is a senior fellow at the Atlantic Council's Brent Scowcroft Center for International Security and its Strategic Foresight Initiative. He previously served in the US State Department as a senior advisor to the Assistant Secretary for East Asia and the Pacific (1989-1993), on the Secretary's Policy Planning staff (2004-2008) and on the National Intelligence Council Strategic Futures Group (2008-2012).)