India: Still at the Center of Its Ocean? 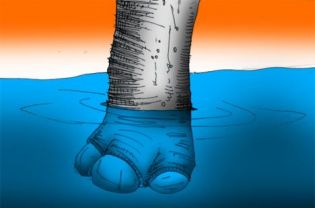 Is India’s influence declining in the ocean named after the country? That seems to be the conclusion of some analysts after Maldives’ cancelation of an airport development contract with an Indian company in November. These concerns are elevated by China’s increased engagement with smaller states in the Indian Ocean, including Maldives.

Given the legacy of the 1962 war between China and India and ongoing competition for influence, New Delhi is right to have suspicions about Beijing’s intentions in its neighborhood and whether smaller Indian Ocean countries are playing the two sides off each other. But the fact is that India’s position in the region remains strong due to longstanding and growing security cooperation with smaller neighbors as well as the Indian Navy’s expanding capabilities. Just in the past week, New Delhi’s influence has been underscored by former Maldives President Mohamed Nasheed’s decision to seek refuge in the Indian High Commission in Male after a Maldivian court ordered his arrest.

India is a rising naval power and has the natural advantage of geography in the surrounding ocean. Moreover, India is connected to smaller countries in the region through entrenched ethnic and historical ties. President Mohamed Waheed has discussed Maldives’ “preferential relationship” with India, and a former Maldivian foreign minister has stated that “nothing will change the fact that we are only 200 miles [320 kilometers] from Trivandrum,” referring to Maldives’ proximity to the Indian city.

India feels security obligations to regional states and has displayed its operational reach through campaigns in Sri Lanka and Maldives. In 1987, it intervened in the Sri Lankan civil war through the Indian Peace Keeping Force. Likewise, Indian armed forces intervened in Maldives in 1988 following a coup, and after the 2004 tsunami the Indian Navy was first to provide critical disaster relief to Sri Lanka, Maldives and Indonesia.

Aside from such extraordinary circumstances, India has enduring and growing military relationships with island nations in the Indian Ocean. India deputes a navy officer to manage the National Coast Guard of Mauritius, where two-thirds of the public is of Indian origin. In 2007, New Delhi built a monitoring station in Madagascar that relays intelligence back to Mumbai and Kochi. India is also installing a network of coastal radars in all 26 Maldivian atolls that feed back to India. The Indian Navy and Coast Guard frequently assist Seychelles, Maldives and Mauritius in maintaining security by providing maritime surveillance, hydrographic surveys, training, and maritime military equipment and repair, in addition to engaging these countries in exercises.

In contrast, China has not provided such maritime assistance, except for two patrol craft and training to Seychelles. India concluded the Dosti exercise with Maldives in April, even adding Sri Lanka to this two-decade bilateral engagement. The three countries will soon sign an agreement to advance maritime domain awareness in the region. India’s military ties with postwar Sri Lanka are now deeper with the resumption of the Slinex naval exercise in 2011, and the two countries began an annual dialogue between their defense secretaries in 2012.

Beyond bilateral relationships, New Delhi is gradually assuming a greater leadership role in Indian Ocean institutions, such as the economic and diplomatic forum Indian Ocean Rim-Association for Regional Cooperation and the Indian Ocean Naval Symposium. Far from India’s influence waning, all these measures reinforce the country’s strong security relationships with Indian Ocean countries.

As seen in India’s security activities with states in its neighborhood, defense cooperation is a normal occurrence and not a cause for concern in its current form in the Indian Ocean. While some observers were unnerved by the Maldivian defense minister’s visit to China after the airport deal collapsed, a similar trip occurred in 2009 during the presidency of Nasheed, who was seen as a pro-India leader. The 2012 visit resulted in minimal security cooperation: China agreed to provide a $3.2 million marine ambulance for the archipelagic nation.

China’s defense cooperation with Sri Lanka was once more robust, with Beijing giving Colombo critical weapons systems to fight the Tamil Tiger insurgency, but has eased since the conclusion of the civil war. Nonetheless, Chinese Minister of National Defense Liang Guanglie recently promised Sri Lanka $100 million to develop military infrastructure in the country’s north and east. He was careful not to antagonize New Delhi. Following his visit to Sri Lanka, Liang traveled to India for confidence-building discussions on border tensions.

Despite India’s entrenched ties with smaller island states in the Indian Ocean, these countries are constrained by limited resources and accept infrastructure assistance from any country that can offer it — from Japan, South Korea and Iran as well as from China.
Smaller countries seek to develop their economies without having to choose between India and China. In fact, New Delhi has not always been receptive to their requests for development assistance and should not be surprised when China steps in to fill this role. Sri Lanka, for example, consulted India first to build a port in Hambantota, but New Delhi declined. Colombo subsequently accepted Chinese funding rather than pass up an opportunity to develop a possible transshipment hub in South Asia.

Furthermore, Beijing’s economic engagement with smaller South Asian states offers benefits for India. Until New Delhi is prepared to increase its investment in regional infrastructure development, China’s road, rail, seaport and airport projects will improve trade and connectivity for the betterment of the entire South Asian region, which the World Bank and Asian Development Bank considers to be among the least integrated regions in the world.

Still, New Delhi should not take for granted its dominant position in the Indian Ocean. The rejection in Maldives, though its significance should not be overstated, serves as a wake-up call for India to invest more in developing its backyard.

Scholar Rani Mullen finds that India’s provision of aid lacks a cohesive strategy. India’s intelligence organization Research and Analysis Wing recently called on the government to provide more economic investment and technological expertise in Maldives and Nepal, following analysis of China’s IT and telecom industries’ interest in these countries. Also, a Jane’s Defence Weekly article reported last July that National Security Adviser Shivshankar Menon called on Indian envoys posted in neighborhood countries to discuss ways to facilitate often delayed infrastructure assistance through the new Development Partnership Agency. Officials conceded that New Delhi’s assistance projects carried on “interminably” and that ties to regional states were “limited and haphazard.”
Despite the failed airport deal with Maldives, New Delhi is not in danger of losing its privileged place in the Indian Ocean. This transactional thinking ignores India’s longstanding security ties with regional states, which have been expanding and will continue to do so.

That being said, China will increasingly pursue economic opportunities in the Indian Ocean, and the smaller states will accept Chinese assistance as they seek to develop their economies. But this is not a zero-sum game and does not translate to India losing its strategic advantage in a region whose very geography is a metaphor for the country’s centrality and growing influence.

Nilanthi Samaranayake is an analyst in the Strategic Studies division at CNA in Alexandria, United States.