Burma/Myanmar: A Nation at War with Itself 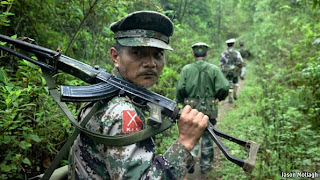 Ongoing ethnic strife could erode progress
Towering high above the center of this ancient city, the Shwedagon Pagoda is one of the great wonders of the religious world. Said to be encased in more than sixty tons of gold, the Shwedagon is older than the city itself. Its earliest legend goes back 2,500 years, when two brothers from lower Burma are said to have met the Buddha shortly after his Enlightenment. As proof of their friendship, the Buddha plucked eight strands of hair from his head, which they brought back and enshrined within the Shwedagon. There it remains, alongside the Buddha's famous precepts, the first of which reads: "Avoid killing, or harming any living thing."

In the hillsides and villages that emanate out across Myanmar from this sacred shrine have occurred some of the most heinous atrocities of the past century ‑ carried out by some of the very people who purport to follow the teachings carved inside.

That a country that is 85 percent Buddhist ‑ the religion of peace ‑ is known for non-stop war is a cruel historical irony. That the Burman majority that makes up 60 percent of Myanmar's population-and staffs its army-has been engaged since the end of World War II in an ethnic cleansing campaign against 135 other ethnic minorities here is a modern tragedy. That the cleansing campaign continues in some villages to this day-even while Myanmar shifts to democracy, opens itself to the world and is praised by foreign leaders, most recently President Barack Obama in his State of the Union Address ‑ is an ongoing outrage that the world must bring to an end.

All sides fighting
"This is a pre-democratic society and the predominant thinking is everyone is against each other," a Western ambassador tells me. "People meet with each other but then foul-mouth each other. There's a lack of identity. Alliances shift and there is fighting in every region."

As Burman historian Thant Myint-U, grandson of former United Nations Secretary-General U Thant, has written, "The geography of [Myanmar] is important in understanding its current ethnic make-up and its possible futures."

Slightly smaller than Texas, nestled between China, Thailand and India, Myanmar's central core is the long, flat Irrawaddy valley, home of the Burman majority. To the east are the Shan hills, dominated by the Shan people ‑ Buddhists who comprise the second-largest ethnic group. To the north and northwest are mountain ranges extending to the Himalayas, dominated by groups like the Chin and Kachin, who are largely Christian. To the mountainous west live perhaps the most persecuted minority, the Muslim Rohingya, a Muslim group. To the south and southeast are hills that run to Thailand, inhabited primarily by the Karen people, who are a mixture of Christians and Buddhists.

All told, ethnic populations cover half of its total land area and make up nearly half of Myanmar's total population ‑ while housing all of Myanmar's international (terrestrial) trade routes, most of its borders and nearly all of its natural resources: from copper and silver to expensive lumber and precious minerals. That's where the trouble begins.

"What ails Burma is not just about politics and human rights per se, but control of the land and the fruits of the land," says a retired American military advisor to the ethnic groups. "It is about controlling ethnic ancestral lands rich in natural resources, and not being able to jointly explore and share prosperity." A high profile Myanmar businessman adds, "In the end, it's about economic rights. Ethnics never feel like they have [any] and the government needs to give them some."

"And remember," says another local businessman, "the problem here is inefficient democracy because we've had 49 years of a different system."

While ethnic conflict here goes back to the Middle Ages, the modern chapter begins with the collapse of British rule after World War II. Burmans largely sided with the Japanese during the war while the ethnics sided with America and Great Britain. When the war ended, Britain inexplicably gave power to the Burmans while disempowering rural ethnic groups. As Britain pulled out, ethnic armies this city, which was then called Rangoon, in what was known as "The Seven Mile Government" (or, as the military advisor calls it, "the Burmans' Alamo.") India came to the rescue, and the civilian-run Burmese government handed power over to the military as its savior.

Never-ending war
Most ethnic groups declared war, and fighting has continued ever since. Military atrocities deep in the jungle displaced more than a million civilians, while ethnic groups were unable to teach or speak their own languages in government-run schools. The status of groups that have signed cease-fires with the government is still unresolved, while the military continues to subject ethnic minorities to religious persecution, forced labor, stolen land and worse.

Even while Barack Obama became the first sitting US President to visit Myanmar last November, the Burmese army was engaged in vicious fighting with Kachin rebels in the far north, breaking a 17-year ceasefire. Rubbing salt in the wound, the army launched airstrikes against the Christian Kachin on Christmas Eve. The real issue, says a European official, is "jade ‑ which the Kachin have, the army wants to take and the Chinese want to buy."

The escalated military campaign, journalist Bertil Lintner writes, "has also sent a stark signal to other ethnic armies which have entered ceasefire agreements with the government… who say they feel threatened."

While "it might be reasonable," as a UN official tells me, "to say that you could have a democracy with eight civil wars going at the same time," President Thein Sein "knows that he must make peace with the ethnics," a Western Ambassador says. With the international spotlight increasingly on Myanmar in the run-up to its chairmanship of the Association of Southeast Asian Nations in 2014, ongoing civil war will be a distraction Myanmar doesn't need-and other ASEAN nations might not stand for.

But there are two big roadblocks to peace.

First, the constitution rammed through in 2008 is anathema to ethnic minorities, since it mandates central government control over ethnic lands - this is tough to alter, as any change requires a 75 percent vote of the legislature plus one, even while the army controls a mandated 25 percent of Parliament. One Karen official tells me bluntly, "If the Constitution isn't changed, the Karen won't join the 2015 [presidential] election-all [ethnic minorities] agree on this."

Why not Switzerland?
While some minority groups, like the Kachin, want outright independence, most want a federal system like the US, or better yet, Switzerland ‑ where ethnic cantons have autonomy within a federal structure. Burmans fear that the issue of control could unite minorities ‑ and this "petrifies Burmans," says the military advisor, "who do all they can to prevent unity, because they realize that the power of ethnic leaders lies in collective action."

The second issue is the army. As an Asian Ambassador puts it, "the president tells the military to stop fighting, but the army keeps fighting." Under the current system, the military still answers to a murkily-defined National Security Council, not the president. As a local editor tells me, "The army still runs Myanmar." But with top officials eager to counter-act the influence of China while retiring peacefully, even military officers realize that true democracy is "the retirement policy for the last regime" and a means to avoid power struggles.

What can the US do to help? A lot.

America should offer to broker peace between the Kachin, the army and the government, tying future aid to successful negotiations. It should work with the UN to educate minority groups and government officials about the meaning of federalism-to go slow and begin to build trust. It should offer to train young government and ethnic army officers through the military-to-military International Military Education and Training Program (IMET), where exposure to US civil society was credited by some with Indonesia's army returning to the barracks in its transition to democracy a decade ago. It should also encourage the private sector to focus all sides on economic development as a common interest, helping Myanmar become the economic powerhouse it has the potential to be if ethnic violence ever stops.

If the two sides do find a path to peace, it may be said of Myanmar what the author Somerset Maugham wrote when seeing the Shwedagon Pagoda for the first time: "It rose superb, glistening with its gold like a sudden hope in the dark night."

(Stanley Weiss is founding chairman of Business Executives for National Security (a non-partisan organization of senior executives who contribute their expertise in the best practices of business to strengthening the nation's security). This article is a personal comment.)