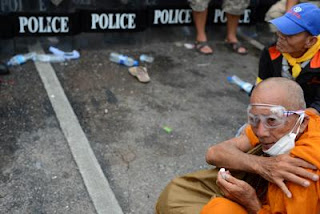 Thailand has regained relative calm and stability over the past year, following a long period of political turmoil stretching back to 2005

The government has finally had some breathing space to roll out its Thaksin-inspired consumption-driven policy agenda. The street protests against Thaksin’s Yingluck government have not gone away — between October and November 2012, a royalist-conservative anti-Thaksin movement called Pitak Siam (Protect Siam) mobilised more than 10,000 demonstrators. But such protests have failed to produce the broad-based support that they did in 2005–06 and 2008 when they effectively overturned the Thaksin and pro-Thaksin governments.

This and other developments indicate that Thai politics have reached a plateau, characterised by an uneasy accommodation on one hand and a protracted stalemate on the other. What warrants attention in the year ahead and beyond is how much Thailand can still manage to move forward despite this precarious arrangement and in view of the overarching endgame surrounding the royal succession.

Thaksin’s continued self-exile reflects lessons learned from past mistakes. In February 2008, Thaksin returned to Bangkok after a similar election victory two months earlier. His presence soon destabilised Thai politics and paved the way for the extra-parliamentary demonstrations and unprecedented judicial activism that eventually ousted his party from power a year later. This time is different. Thaksin’s party may have won the last election in July 2011 by a decisive majority, but he has chosen to rule Thailand from abroad, seemingly content with allowing Yingluck, his sister, to run the government at home in person, surrounded by his team and guided by his policy ideas.

Thaksin and his party have also been cautious in pressing for reform of the 2007 military-inspired constitution, despite having initially campaigned for constitutional change. The Yingluck government certainly has the bicameral simple majority that it needs to revise the constitution — Pheu Thai holds more than half of the 500 seats in the lower house and at least close to half of the 150 member senate. Yet the government threw in the towel without a fight last July, when the Constitutional Court ruled that it had jurisdiction over the legislative work on the charter and suggested that a referendum be held to gauge public opinion on amendments. To defuse tension between the judiciary and the legislature, the government has delayed constitutional change indefinitely by referring the matter to specially created committees. The changes to the charter are not pressed because it could derail the Yingluck government. Even with the constitutional rules specifically designed to keep him and his ilk out of office, the Thaksin team’s repeated election victories obviate the urgency of charter change. Why change the rules when you keep winning the game?

While corruption is synonymous with the Thaksin brand, Yingluck’s graft scandals have been manageable. As a fresh face in Thai politics, Yingluck does not have much baggage. She has managed to avoid significant charges of corruption, despite having been heckled and ridiculed for her fashion taste, dismal English, poor Thai and even an alleged sex tryst. The accusations levelled against her cabinet ministers of corrupt dealings in the government’s rice-pledging schemes and flood-prevention projects have also not been serious enough to undermine Yingluck’s legitimacy.

Finally, the Yingluck government has adopted a policy of protecting and upholding the monarchy at all cost. King Bhumibol Adulyadej presided over Thailand during the Cold War when the strong and symbiotic roles of the monarchy and military were key to keeping communism at bay. In recent years, electoral democracy has created a chasm between democracy and monarchy-centred outcomes that has manifested in crisis and turmoil. To stay in office, the government must allow Thailand’s transition to take its own course without rushing or subverting it. For her part, Yingluck has done little to protect freedom of expression in recognition of the sacrosanct status of the monarchy. What happens during and after the succession is anyone’s guess, perhaps confined to the Thais’ Buddhist fatalism. But what is clear is that the government must defer to the palace on all matters related to the monarchy.

There are still many within Bangkok’s established centres of power who detest Thaksin for his ego, abuse of power and corruption. But an anti-Thaksin fatigue seems to have set in. Plenty of people in Bangkok oppose Thaksin but cannot find enough traction to kick his government out yet again. Too much is at stake. Thaksin’s opponents need to win the next election but they are at a complete loss as to how. In the interim, they have put up with Yingluck at home in exchange for Thaksin’s self-imposed exile, an intact constitution and an untouched monarchy. These arrangements, representing stalemate and accommodation respectively, form two sides of the Thai coin during the twilight period of King Bhumibol Adulyadej’s reign.

Thitinan Pongsudhirak is Associate Professor and Director of the Institute of Security and International Studies at Chulalongkorn University.