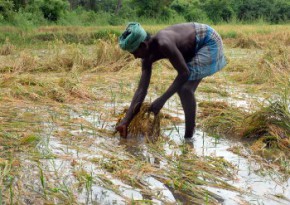 The woes of Vidarbha

The two deaths also set in motion the farm suicide spiral with which Vidarbha grapples every year. In the first month of this year alone, for instance, mounting debt and distress due to crop losses have claimed the lives of 10 farmers, which led the region's farm widows and bereaved families to mark Republic Day (January 26) as `Black Day'.

Not for nothing is Vidarbha dubbed India's `farmer suicide capital'. However, over the past few years the area has been reeling under its worst agrarian crisis ever. leading to an escalation in the number of suicides. In 2006, 1044 farmers killed themselves in the impoverished region while last year, 1,000 suicides were recorded.

According to a study conducted by the Indira Gandhi Institute of Development Research, Mumbai, the major drivers are debt, crop failure and low returns, illness of family members, failure to arrange marriage of daughters and a lack of alternative sources of income.

Although farmers kill themselves in other Indian states as well (Andhra Pradesh, Punjab, Karnataka and Orissa), Vidarbha's case unique because falls in Maharashtra, one of India's most prosperous states. The region is famous for growing oranges and cotton, apart from being rich in minerals, coal, forests and mountains. Ironically, it has always been underdeveloped with its full potential untapped despite holding two-thirds of Maharashtra's mineral resources, three quarters of its forest resources and being a net producer of power.

Largely due to neglect from the state government and its lackluster political leadership, in recent times, there have been increasingly strident calls for a separate state of Vidarbha. Farmers' living conditions are so poor that more than 32,000 farmers have killed themselves in Maharashtra in a decade, of which 70 percent have taken place in the 11 districts of Vidarbha.

Governmental apathy only makes things worse. According to a report by the Tata Institute of Social Sciences, Mumbai, last year when the government announced relief packages for the affected families, there was hardly any visible or transformative effect on suicide behavior. Farmers attribute this to the fact that none of their concerns are ever factored into the design of any of the rehabilitation measures.

In April 2007 Green Earth Social Development Consulting produced a report after doing an audit of the state and central government relief packages in Vidarbha. The report's conclusions were that inputs were not sought from any of the stakeholders ? neither the farmers nor civil society organizations, local government bodies nor the panchayats or local administrative units.

The relief packages, said the report, were mostly amalgamations of existing schemes. "Apart from the farmer helpline and the direct financial assistance, there was scarcely anything new being offered. Pumping extra funds into additional schemes shows that no effort was being made to solve a situation where existing measures had obviously failed," noted the report.

Against the backdrop of such state neglect, it is hardly surprising that despite the government's own assessment of 4.2 million hectares of Vidharbha's land being "badly affected," none of the districts in the region are covered in the recent U$1 million relief aid announced by the Centre.

"Farmers are losing faith in the government due to its failure to design and implement effective pro-poor policies for the small farmers who survive on agriculture," said Balkrishna Hedge, who works with a local NGO. "The administration offered financial relief packages only to the families of deceased farmers who were unable to manage payments on their bank loans. But this alone isn't sufficient."

The activist added that the government needs to put in place a monitoring system to identify vulnerable farmers, offer them timely help and institutional finance and crop insurance. It is an open secret that in the absence of institutionalized finance, the farmers are forced to borrow money from private money lenders at exorbitant interest rates.

Activist Kishore Tiwari of Vidarbha Jan Andolan Samiti, which is fighting for farmers' rights, said the government's skewed priorities are responsible for the dire state of affairs. "Government ministers are spending millions on the 'Advantage Vidarbha' meet to attract investment into the region. The Opposition parties are also arranging 'Agro Vision' on a massive scale to lure foreign investors. However, while grand preparations are on for both events this month at Nagpur, nobody has bothered to visit the crisis-ridden farmers," Tiwari said.

The problem, he added, is that farmers trapped in debt spirals are not finding a way out. "Unless the government wakes up to this crisis, the coming summer could see many more farmers losing their lives," he said.

In the absence of procurement of crops at a minimum guaranteed price, farmers are being forced to offload their crops at throwaway prices, resulting in heavy losses. The cultivation cost has almost doubled this year due to a dramatic upward spiral in the prices of seeds, fertilizers, pesticides and labor rate whereas the market prices of cash crops, like raw cotton and soyabeans have gone south.

Similarly, while the cotton crop has failed once again (third time in a row), the government has done nothing to protect the cotton growers who are now forced to sell raw cotton at throwaway prices because of abysmal demand.

Experts say there is critical need for a comprehensive intervention to ensure self reliance and capacity building among farmers in modern farming techniques, monitoring and support system for vulnerable farmers and a village-level, transparent system for disbursement of relief packages to improve the situation.

From strengthening institutions that provide credit, seeds and fertilizers and ensure a reasonable minimum support price for agricultural produce to building infrastructure for irrigation, a raft of issues need to be tackled, they say.

"There is also a crying need for a human touch. The National Mental Health Program at primary health care level needs to be fortified to offer support and counseling to vulnerable farmers in the area," said a volunteer. Asia Sentinel
Posted by Kerry B. Collison at 12:38 PM