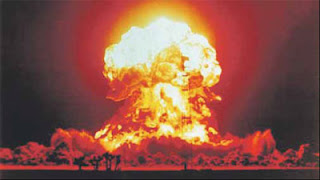 A seemingly minuscule change in its law may have big implications

It would be wrong to say Japan’s experience as the first victim of nuclear weapons in 1945, the year when the United States became the world’s first nuclear power, is a permanent deterrent to its own ambitions for nuclear weapons. It would be also a mistake to assume that the country’s nuclear trauma in the 67-year wake of Hiroshima and Nagasaki, especially since the 2011 Fukushima era, has snuffed the government’s interest in weaponization.

It is thus disappointing but not surprising that Japan recently altered its basic law on atomic energy to include “national security” among its goals for nuclear power. An Upper House session was quick to revise the main principles of the basic law on nuclear power for the first time in 34 years so as to avoid the neighbors’ watchful gaze. That adds fuel to the fire that the new wording could be a stepping stone to legally permitting the development of atomic weapons in the not-to-distant future. It is hardly the first time that Japan has fumbled the nuclear issue with its neighbors, although Japanese officials in the past have always immediately moved to squash such allegations.

Environment Minister Goshi Hosono told the Diet on June 13 that “security means nonproliferation.” Chief Cabinet Secretary Osamu Fujimura reiterated the government's stance on the following day, apparently in consideration of the growing concerns from the neighboring countries, assuring that “our principles over the peaceful use of nuclear power will be firmly observed.” These allegations are the equivalent of arguing that fishhooks do cause the catching of fish, since this can also involve rods, reels and anglers.

In any case, the Japanese nuclear program is not so much driven by ideology as by a mixture of fear and ambition. In effect, that is what Japanese leaders on the right wing are already doing, and will continue doing so long as the following troubles are not fundamentally resolved.

First, China’s rise poses serious threats to the national security and sovereignty of Japan. Historically, the Japanese people have a negative impression of China and vice versa. For example, the territorial spat over the Senkaku Islands, known to the Chinese as the Diaoyus, which are controlled by Japan but claimed by China, has darkened both sides of the East China Sea. There are still-fresh scars left by wartime atrocities, such as the 1937 Nanjing Massacre and the Manchurian Incident of 1931, in which Japanese troops fabricated a bomb attack and used it as a pretext to invade and establish a puppet government. Japan has long been a target for Chinese expansionism in Asia in areas where American military and economic influence are beginning to wane.

Second, Japan fears that America’s ability to control global and regional issues is inevitably declining. The weakening US power therefore raises a fundamental question to Japan: how to live ‘harmoniously’ with China in the region, given that America’s ‘pivot to Asia’ remains uncertain. It is an article of faith among Japanese conservatives that the possession of nuclear weapons would function as the great equalizer that would guarantee its security. In fact, Japan may be skeptical of whether the US can still provide the credibility of its extended deterrence commitments in the event of a Chinese conventional, chemical or biological attack.

Third, North Korea’s die-hard nuclear ambitions, as evidenced in 2009 and 2009 nuclear tests, have served up a good excuse to revise the basic Japanese atomic energy laws. In particular, Japanese conservatives have played up the outlaw regime’s threats and played down the US’s nuclear umbrella. Talk of the nuclear umbrella may be music to the Japanese right but it’s not to the public as a whole.

This isn’t to say the Japanese are fond of American nuclear deterrence in the region. In spite of Washington’s efforts to make the North’s nuclear weapons program obsolete, Pyongyang has officially declared itself a nuclear-armed state in a constitutional revision in the last April. Japan may find the crippled six-party talks unnecessary to resolve the denuclearization of North Korea. Most of Japanese pundits have long since stopped believing the North would abandon its nuclear weapons program.

Finally, most Japanese now feel more insecure than at any time during the lost decades. They are often seen as losers in many respects. Japanese political elites thus feel the urgency of creating new momentum so as to rebound quickly from the tsunami and Fukushima disaster, while watching nervously the military and economic rise of China. Japan’s relatively stagnant has filled this social vacuum and eventually revived concerns that the Japanese could be drawn into a Sino-Japanese conflict in the immediate future, as the successful Chinese atomic bomb test in October 1964 prompted some right-wing Japanese leaders, including Yasuhiro Nakasone (to become prime minister long later), to call for a reconsideration of Japan’s policy of nuclear abstention.

Needless to say, Japan has a nuclear future. But foreign Japan watchers need to understand the differences of the Japanese expressions between rhetoric and reality, called honne (underlying intention) and tatemae (surface meaning). An equivocal Japan has a long history of its political leaders both expressing and hiding nuclear nationalism. Prime Minister Eisaku Sato shocked the then Johnson administration at a private meeting in January 1965 by claiming that “if Chinese communists had nuclear weapons, the Japanese also should have them,” but also announced to the National Diet in December 1967 the adoption of ‘Three Non-Nuclear Principles.’ These stated that Japan would not manufacture, possess, or permit the introduction of nuclear weapons onto Japanese soil.

In the spring of 1968 nevertheless, Sato allegedly commissioned clandestine, nongovernmental research on Japan’s nuclearization in the disguised name of ‘The Study Group on Democracy.’ Needless to say, Sato held dyed-in-the-wool views that the possession of nuclear weapons would secure Japan’s future.

While the recent revision of the Atomic Energy Basic Law has been somewhat disconnected from reality on the ground, the Japanese public with their severe nuclear allergy, can be ‘educated.’ It’s an open secret that Japan now possesses enough weapons-grade plutonium on its soil to make more than 700 nukes. Critics warn that Japan’s latent capability to acquire nuclear weapons constitutes an unacceptable threat in the volatile region.

Japan as a responsible country is thus again on the brink of a nuclear dilemma emanating from a combination of fear and ambition. Diplomatically cautious though it may be for South Korea, China and North Korea to take issue with Japan, Tokyo’s nuclear reticence will likely continue to evolve, politically and militarily. If the pattern of benign neglect strategically continues, Japan’s neighbors will grow less interested in cooperating with Tokyo and any possibility of North Korea’s denuclearization, slim at best, will disappear. In a sense, Japan has jilted the Obama administration’s nuclear free-world mantra.

One would think that Japan and its ‘close and distant neighbors’ could find common ground on security and stability in Northeast Asia. Yet there have been little more than historically deep-rooted public spats among them. Inevitably, ordinary Japanese dance to a tune played by political and military elites, with no regard to a yawning gulf between the elites and the people. The truth of nuclear ambitions is not always easy to hear, but this may turn out to be Japan’s greatest diplomatic challenge.

(Lee Byong-Chul is a senior fellow at the Institute for Peace and Cooperation in Seoul.)