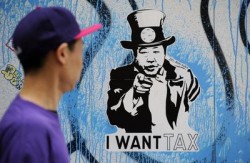 In the post-Lehman Brothers ‘great recession’, ageing populations have turned public deficits into a global problem. The G8 meeting held in Washington in May 2012 emphasised the importance of economic growth, and underlined once again the serious problem of deficits that the world faces.

The warning is especially timely for Japan, whose fiscal deficits are the worst among the advanced countries at 200 per cent of GDP. The question now is why and how did the country accumulate so much debt.
A decrease in tax revenue is one reason for the increase in deficits. Beginning in the early 1990s, the Japanese economy entered a long period of stagnation dubbed ‘the lost decades’. In these years, the tax revenue that had once reached 60 trillion yen (US$762 billion) fell to 40 trillion yen (US$508 billion). This coincided with an increase in public expenditure — public investment in particular — that aimed to counter the recession the country was undergoing. This changed from 2001 when Japan turned to fiscal consolidation under the administration of Prime Minister Junichiro Koizumi, which cut public investment in half. Despite these efforts, deficits continue to rise due to the significant cost associated with sustaining the social security system.

The nationwide social security system established in 1961 has made great contributions to post-war Japanese society. For example, in 1950 Japan’s average life expectancy — of 58 years for men and 61.5 years for women — was the shortest among the advanced countries. Today, Japan enjoys the world’s longest life expectancy (83 years). Two causes are to be credited with this improvement: the steady rise in average income in post-war Japan, and social security.

But the social security system now faces serious financing problems due to rapid ageing. While the major beneficiaries of the system are people aged 65 years and older, it is the working population (20–64 years) who pays the majority of taxes and social security contributions. This is to say that ageing simultaneously brings about a decrease in revenues and an increase in payments. This obviously poses a challenge. The ratio of the aged to the working population is expected to be nearly one to one by 2050. According to the UN, Japan is ageing faster than any other nation. Ageing is not unique to Japan (China will face the same problem this century), but the problem is more pressing here than elsewhere.

Japan’s ageing population is causing this increase: every year, people get one year older and more people start receiving pensions, which forces the government into putting more money into the system. Likewise, the medical costs of the aged are five times higher than those of the working population. Again, this requires the government to put more money into sustaining nationwide medical insurance. Social security and ageing are at the core of Japan’s public deficits.

How can Japan solve this problem? The answer is straightforward: Japan needs to raise the consumption tax rate while making social security compatible with a rapidly ageing society. Japan’s consumption or value-added tax (VAT) rate is currently 5 per cent — one of the lowest in the world. The EU, for instance, imposes a minimum VAT of 15 per cent on member countries. By global standards there is ample room for Japan to raise its VAT rate.

Japan raised the consumption tax rate from 3 to 5 per cent in 1997. Unfortunately, the economy fell into a severe recession later that year. Policy discussions on the consumption tax today are haunted by this experience. Arguably, the major cause of the 1997–98 recession was not the consumption tax increase but the 1997 Asian financial crisis. Several major financial institutions went bankrupt in 1997 because of bad loans, which the authorities left unresolved for more than five years after the bubble burst. The lesson here is that Japan must not put off addressing serious problems, but resolve them as soon as possible.
Plainly, the most serious economic problems Japan faces today are its mounting public deficits and unsustainable social security programs. The obvious first step for solving these problems is to raise the consumption tax.

Hiroshi Yoshikawa is Professor of Economics at the University of Tokyo.
This article was originally published as an AJISS Commentary.