Ecology-economy balance is a must 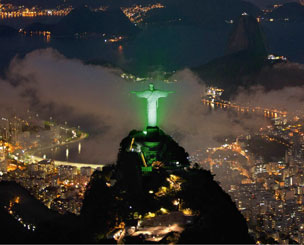 Rio de Janeiro’s Christ the Redeemer statue is lit in green on the inauguration day of the UN Rio+20 Conference on Sustainable Development on June 14. Around 115 leaders are expected for the summit itself on June 20 to 22. AFP PHOTO Manila Times

For the casual or even somewhat cynical observer of the so-called global green movement, the Rio+20 Environment Conference on June 16-22 in Brazil may just be another one of the run-of-the-mill yet expensive, glorified talkshops of the United Nations.

For such conferences, several hundred delegates and dignitaries from around the world putatively converge in the spirit of “global cooperation” and seek common agreements on how to address gargantuan social and environmental challenges facing humanity. But as is often mentioned as critique, such “talkfests” result in little or no concrete steps to actually solve many of the ills that now plague societies everywhere. What they ironically leave is a massive carbon footprint, considering the countless air miles logged by the mammoth crowd of participants to such events.

Green economy
While this somewhat disparaging observation may be true, it remains fair to say that such global meetings goad governments to include the environment in their national planning or development agendas. In conferences such as this, the symbolic currency of international action and cooperation on the environmental front continues to be strong, as national delegations map out positions on several issues – from forests and marine biodiversity to climate adaptation and renewable energy — even as they seek common ground and formal agreement. This year the focus is on the building of “green economies” and notwithstanding the mixed-bag, phlegmatic lip-service outcomes of the Copenhagen and Durban Climate Change talks in the last two years, we continue to hope that Rio+20 turns out to be more substantive and relevant than what different detractors and skeptics would give it credit for.

The luster of summits like Rio or Rio+10 in Johannesburg and Rio+20 this year is for all intents and purposes still there, if only for the fact that on the global stage, even amidst regional conflicts and sundry threats to peace, peoples and governments recognize a common destiny as human inhabitants of one planet. A planet, in fact, in the throes of warming oceans and rising temperatures and the real and present danger these pose for life on earth.

Agenda 21
When the first Rio Earth Summit was held in 1992, there was a large enough consensus across countries on the need to hasten the crafting of a global environmental policy on “environment and development.” Thus the wider reach of the term “sustainable development,” which is defined originally in the Brundtland report of 1987 as “development that meets the needs of the present without compromising the ability of future generations to meet their needs.” This was preceded two decades earlier in 1972 in Stockholm, when out of a theme on the “Human Environment,” the United Nations Environment Program or UNEP was established.

Forty years or so ago, many nation-states began waking up to the increasing phenomena of acid rain, water and air pollution, rapid deforestation and the depletion of fisheries in our oceans. In the final decade of the last century, the demographic reality of growing urbanization and exploding populations dependent on forests and coastal resources forced a rethinking of development paths that compromised the life-supporting services of our natural ecosystems.

Hence the genesis of Agenda 21 in the 1992 Rio summit, recognizing the need to balance economic growth with protection and conservation of natural resources, and ensuring that the carrying and replenishing capacities of these ecosystems are not irreversibly breached. The action plan for the a sustainable 21st century, thus Agenda 21, was adopted by 178 governments, which in turn crafted their respective national Agenda 21 programs.

Economy - Ecology
Rio+20 returns us to these Agenda 21 programs and to the familiar tension that attends many of our economy versus ecology debates. If poverty reduction and development were to be pursued through more capital investments, manufacturing, extractive industries and employment opportunities, how much of these should be done without destroying the ecological wealth and natural capital of nations?

It seems straightforward enough that development and economic growth ought not be sought at the great expense of our forests, rivers, seas, air and land – and the biodiversity of flora and fauna found in various and unique ecosystems. But as our economies grow, so does the appetite for resources extracted from the earth. As our populations increase, so do solid waste and pollution. As climate change heightens, so do the vulnerabilities of communities to the impacts of weather events like floods and droughts that become increasingly erratic and destructive to homes and livelihood.

Brazil’s tensions
Nowhere is this tension more manifest this month than in the host country of Rio+20 itself. Brazilian President Dilma Rouseff just recently vetoed a legislative bill passed in the national parliament to allow greater access to the vast but greatly endangered Amazon rainforest, the much-bruited ‘lungs of the planet.’ This bill would have revised the Forest Code and opened virgin forestland or logged-over areas to the fuller control of private landowners and large business interests.

The bill’s proponents see this as necessary to maintain the growth trajectories of one of the largest emergent economies in the world. But for those who see the Amazon and its abundant biodiversity as part of the ‘global commons,’ this proposal is patently unconscionable. And if President Rouseff had signed this measure into law, it would have set this as a sad, ironic or downright bizarre backdrop to her country’s hosting of the summit, formally known as the United Nations Conference on Sustainable Development.

Resource wars
We witness this intense contestation over land and resources in the Philippines as well. That is why extractive industries like mining are as much an economic as an ideological or emotional issue in these parts. The control and definition of how land and natural resources must be utilized, exploited or protected are sought within arenas of conflict, or become the trigger points for the highly-charged political economy of resource use and management.

The situation of competition over scarce and even critically-endangered ecosystems plays out in acute ways in regions where private business investments collide with ancestral domains of indigenous peoples, or overlap with protected biodiversity zones, or face resistance from adamant local communities or governments who assert claims and ownership rights over land and resources. Mindanao and the Cordillera regions are clear cases in point.

Climate action plan
When fragile systems that provide clean water and clean air and healthy soils in such regions – which in turn ensure food and water security – are compromised or damaged, and exacerbated by climate change impacts, economic security is itself is in fact eroded. This is the reason why the National Climate Change Action Plan, which President Benigno Aquino 3rd signed in November 2011, addresses the insecurities of water, food, energy, health faced by the poorest and most vulnerable communities or provinces in the country to the impacts of climate change.

It is not enough to see our resource-rich uplands and islands as sources of minerals or timber, food or fish, but as functioning “eco-towns” or “eco-regions” where conservation and profitability of ridge, river and reef are not mutually exclusive – where ecology and the economy can, indeed, strike a sustainable balance. And where poverty reduction efforts are tied with climate change adaptation initiatives.

Indonesia’s example
This is where we draw a page from the Indonesian example, where the commitment to such balance is made. On the eve of the Rio+20 Conference, President Susilo Bambang Yudhoyono’s call for a global policy on safeguarding the future of Indonesia’s rainforests is a major step for Asia and the world.

Indonesia’s tropical rainforests are the third largest in the world and central to the country’s economy, environment and society, as it is for climate change adaptation and longer-term mitigation. Indonesia has pledged to reduce its greenhouse gas emissions by 26 percent from present levels by 2020, which can only be done if its forests are effectively protected.

As Indonesia takes a leading role in the Rio+20 dialogue on sustainability and building a green economy, the world is served notice that, as Yudhoyono declared, “forests are vital in the creation of new sustainable development approaches related to jobs, energy, cities, food, water, oceans and disasters.”

Reality checks
As the Philippine delegation led by the National Economic Development Authority, the Climate Change Commission and the Department of Environment and Natural Resources head off to Brazil, it will be wise as our country’s representatives to take heed of what economist and author of The Skeptical Environmentalist Bjorn Lomborg underscores. As the Rio+20 participants engage in vigorous debates or share common and best practices for environmental initiatives, the inescapable reality is that there is “a deep and disturbing disconnect between the mighty who walk the plush carpets of the UN arena and what the vast majority of the world’s inhabitants need.”

Lomborg reminds us that in the world there are 900 million people who remain malnourished, one billion who lack clean drinking water, 2.6 billion who lack adequate sanitation, and 1.6 million without electricity. He makes the argument that for the billion people across Asia, Africa and Latin America who live on a dollar a day, environmental issues are a distant luxury and that, quite starkly, one of the largest environmental challenges today remains lifting people out of abject poverty itself.
So as the world – or those on the green front – beat a path yet again to Rio this month, they will be reminded of the fact that, as the UNEP laments, little progress since the Earth Summit has been made worldwide on 90 of its identified most crucial environmental goals. And as hope remains eternal, the words of Mikhail Gorbachev – former Soviet Union President, 1990 Nobel Peace laureate, and founder of Green Cross International which was formed after the 1992 Earth Summit – are instructive in a stern and yet inspiring way:

But in the face of every great challenge there is always a choice. The future is not predetermined. It depends on what we do today. The choice we have to make is a collective one. Everyone – politicians, business leaders, activists – has a role to play. The question is whether we want to ensure a safe, sustainable future for everybody or keep being held hostage by the current mix of political and economic interests and motivations.

[Neric Acosta is Presidential Adviser for Environmental Protection and concurrent head of the Laguna Lake Development Authority. As congressman of Bukidnon (1998-2007) he principally authored landmark laws on clean air, clean water and solid waste management, and is co-convenor of the Philippine Imperative on Climate Change.]