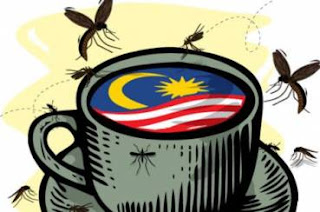 Polls keep receding into the future, with analysts talking about hung parliament

There is growing speculation in Kuala Lumpur that the country might have to deal with a so-called hung parliament, in which no major party has an absolute majority of seats, following national elections expected to be called before the end of the year.

That would be a drastic comedown from the decades prior to 2008, when the opposition Pakatan Rakyat coalition broke the Barisan Nasional’s two-thirds majority in parliament for the first time since the country’s independence in 1963, and it would open the parliament to chaos. Intensive horse-trading would take place, in which both sides would resort to pouring money to secure the loyalty of the minority parties and lure members away from the other party, reminiscent of what followed the 2008 opposition victory in Perak state, after which Prime Minister Najib Tun Razak induced three opposition lawmakers to change sides and took the state away from the opposition.

When the election will be held remains open to question, with the date continuing to recede since speculation started last year. The polls had been rumored for June, then July. That seems unlikely as Parliament remains in session until the end of this month, although it could be adjourned if the Prime Minister decides to do so.

But Puasa, the Malaysian version of Ramadan, begins July 20 and runs through Aug. 19 and is followed by the hajj, when devout Muslims visit Mecca, and other religious events. Some analysts believe the polls could be in September, although the budget is to be presented to the parliament on Sept. 28 and it is widely believed Najib will hold up the dissolution of parliament until after he announces a budget that would deliver benefits to the electorate. In the 2012 budget, Najib poured out a cornucopia of goodies, including salary increases for the country’s 1.3 million civil servants – mostly ethnic Malays, UMNO”s core constituency as well as a RM500 (US$162) one-off cash benefit for households earning less than RM3000 (US$974) per month – also aimed at poor, rural Malays and Indians, totalling RM1.8 billion (US$583 million).

Nonetheless, “The feedback they get is bad,” said a source with ties to the government in Kuala Lumpur. “Special Branch, Umno, the Information Ministry, military intelligence - all show slim majorities. So they are worried.”

In a May report written in conjunction with the Centre for Strategic Engagement JP Morgan Chase called the election the country’s key market risk, with a market rally if the Barisan retains or improves on its current 137 parliamentary seats. If the Barisan were to win fewer than 122 seats or if Pakatan Rakyat were to pull off a victory, the outcome would be negative.

The implications are worrisome to the business community and investment. One of the casualties, at least in the short term, appears to be the long-stalled Lynas Advanced Materials Plant rare earth processing facility in Gebing in Kuantan State, which is increasingly frustrating the Australia-based parent company Lynas Corp Ltd. However, the plant has become an emotive issue, with some voters saying they are worried that radioactive waste from the plant could contaminate the environment. The opposition, particularly the Democratic Action Party, has had a field day with the issue, holding rallies all across the country to publicize it. Lynas is suing the Save Malaysia Stop Lynas organization and several media organizations for defamation over what the company terms false and misleading statements.

Lynas is now awaiting approval of the processing plant by a Parliamentary Select Committee to be headed by the Higher Education Minister which is due to meet next week. The decision is almost certainly out of the hands of anybody but the prime minister, however.

On Friday, the Science, Technology and Innovation Minister, Maximus Ongkili, rejected an appeal by a a local group against the plant’s temporary operating license, but imposed two new restrictions on the company, ordering it to formulate plan to immobilize radioactive elements in the plant’s waste and to come up with a response plan on dust control.

The company said it expects to process up to 22,000 metric tons of rare earths annually, roughly 20 percent of the world market. Its biggest customer is expected to Japan.

So far, according to a Sydney-based spokesman for Lynas, the company has sunk between A$600 million and A$800 million into the Lynas Advance Materials Plant and employs 400 Malaysians with nothing to do but wait for the shipment of ore to be processed from the company’s mine operations in Mount Weld in western Australia. An UMNO source said the company is bleeding vast amounts of money into the operation, which has been underway for years. Malaysia was so eager for the investment that it granted a 12-year tax holiday.

“If you think about it in the context of the first approval in 2008, since then it has been through a number of checks, independent assessment by the International Atomic Energy Agency, the temporary operating license was awarded at the beginning of this year. Lynas has passed every test. It has been one excuse after another. It is justifiable that we are getting a little impatient,” the spokesman said. “Lynas has spent a significant amount of money, we are very committed to Malaysia but we can’t do anything without the license. It is ready to go, Lynas’s point of view is that we have invested in invested in good faith, we have been through everything that needs to be done.”

“There is nervousness on all sides,” said the head of a think tank in Kuala Lumpur. “What’s interesting is that lots of other parties are starting to come out, clans, associations, trying to scramble because they see the lack of Chinese leadership in the (ruling coalition) Malaysian Chinese Association. There has been talk of a hung parliament.”

A win by the Pakatan Rakyat, led by Anwar Ibrahim’s Parti Keadilan Rakyat, would at best lead to policy changes and breed uncertainty for at least nine to 12 months, JP Morgan believes, advising investors to sell and saying the policy impact would be felt across industries such as utilities, construction, gaming and transportation.

However, sources say in Kuala Lumpur, Parti Keadilan is riven with factions and disorganized, with Anwar constantly harried by lawsuits and various attacks on the part of UMNO figures. He has most recently been accused by a former Bank Negara official who charged Anwar had maintained 20 master accounts totaling RM3 billion in 1999. Anwar has denied the allegations.

One of the most worrisome concerns is the increasing polarization of the races. The latest Merdeka poll showed a slight decline in approval for Najib, down from 69 percent to 65 percent. The poll was taken after the latest Bersih electoral reform rally. But while his personal popularity remains relatively high, there are some very worrisome features to the poll. Some 74 percent of Malays approve of Najib’s performance, but only 35 percent of Chinese and 14 percent of Indians. Only 48 percent are happy with the government, with 42 percent either dissatisfied or outright angry. Only 17 percent of Chinese are positive towards the government, while the percentage of ethnic Malays approving has risen from 64 percent to 67 percent.

The opposition’s record in running the four states it captured in the 2008 election has been described as spotty, with Lim Guan Eng, the chief minister in Penang, given high marks. The record of the administration in Selangor, the biggest prize for the Pakatan Rakyat, is spotty at best. The two states controlled by PAS have benefitted from the fact that have benefited from the fact that PAS has had experience governing after previous elections. Asia Sentinel