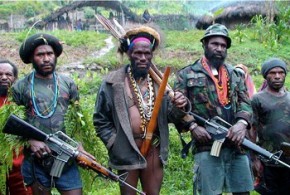 Forty-three years after Indonesia wrested Papua from Dutch colonists, analysts in Jakarta say there is a growing danger that, as with Timor Leste, Jakarta could be forced to give it up to the indigenous Melanesians who have put on an increasingly violent campaign for independence.

That might be unnecessarily alarmist.  However, yesterday the head of Indonesia’s National Intelligence Agency, Gen. Marciano Norman, blamed the Free Papua Movement (OPM) and “foreign interests” including sympathetic foreign NGOs for the shooting and violence, saying insurrectionist strength is growing.

“Members of the OPM, who normally operate in the rural areas, now dare to run their armed operations from within city limits, because they’ve won backing from local political groups, which support the separation of Papua,” he told reporters. “The OPM is divided in two groups, one focused on politics and one that runs armed operations. Both groups have been in constant contact these days. They have also made contact with their colleagues abroad.”

More than 30 shooting incidents have flared in the past year in the resource-rich province. A plethora of multinational companies involved in resource extraction are active in the sparsely populated province. It is the home of Freeport McMoRan’s gigantic Grasberg Mine, the largest gold mine and the third largest copper mine in the world.

An unknown number have died on both sides in the last month, including 15 people last Wednesday. So far, the government has failed to arrest any suspects in the shootings. Ten more apparently were killed were killed when the military opened fire in an alleged retaliatory attack on a village the next day after an Indonesian solder had been stabbed to death, Ferry Marisan, director of the Papua office of the Institute for Policy Research and Advocacy in the city of Jayapura told reporters by phone, saying dozens of others had been injured and that houses had been burned.

Indonesia has taken two contrasting approaches to its restive provinces. After a decade of violence in Timor Leste, the United Nations sent in security forces in 2006 to restore order when unrest and factional fighting resulted in chaos for the newly independent country. By contrast, the Islamist Free Aceh Movement (GAM), in the restive Aceh province concluded a peace agreement in Helsinki with the government, ending a nearly 30-year civil war that left more than 15,000 dead and thousands displaced, offering an amnesty for all GAM members and release from for those who had been held, restricting government troop movements and guaranteeing that 70 percent of the province’s natural resources would stay in Aceh. The agreement has been held successfully.

As with Timor Leste, the big fear in Jakarta is that international forces would be called in to buffer the two sides in Papua, with the possibility that an independence pact would be the upshot.

House Speaker Marzuki Alie, a member of Yudhoyono’s Democratic Party, told reporters the shootings could indicate that people were fighting for control of natural resources. Other sources say the contest is between Indonesia’s military and police over who controls the enormously rich assets of the province and the inability to solve any of the shootings is because of the involvement of security officers.

“It’s just strange that the government can’t solve a single case even after nearly 30 people have died recently in the province,” opposition legislator Tubagus Hasanuddin, a member of the House of Representatives’ Commission I, which oversees security affairs, told reporters in Jakarta Monday.

The ethnic Papuans charge that foreign companies have denuded vast areas of the island by logging and deforestation, with the forest being replaced by oil palm plantations controlled by Indonesians. Amnesty International estimated last year that as many as 100,000 Papuans have been killed by Indonesian troops and police since Indonesia took control of the province in 1969. Ethnic Indonesians have been invading the province, the natives say, carrying out illegal gold mining activities as well as illegal timber cutting and essentially marginalizing the Papuans in their own land.

Critics blame complacency by the authorities, saying the increasingly bitter conflict underscores President Susilo Bambang Yudhoyono’s inability to address the province’s problems. The authorities blame the Free Papua Organization for the violence. Indeed, the OPM commander in the Puncak Jaya region claimed responsibility for several attacks on the Indonesian military, including one in which an Indonesian helicopter was shot down, killing one soldier and injuring seven more.

Security forces, however, have responded with plenty of force. Last October, in an incident that was filmed and widely distributed both locally and internationally on the Internet, more than 300 native Papuans were arrested in a melee at a three-day Papuan Congress in which at least 90 people were beaten and injured as they attempted to run from the authorities. Three were killed and six Papuans were charged with treason.

Few foreign journalists or human rights researchers are allowed to visit the province. The New York-based Human Rights Watch blames Kopassus, Indonesia’s notorious Special Forces unit, which appears to operate with impunity, as it did in Timor Leste. In one notorious incident last year, six soldiers were filmed on video torturing two Papuans. The video was also widely distributed across the country, causing a furor. However, only three of the six were convicted and given eight to 12 months imprisonment. None of the soldiers have been discharged.

In August 2011, according to Human Rights Watch, a military tribunal in the provincial capital of Jayapura convicted three other soldiers from the battalion for murdering a local reverend on suspicion he was a separatist. The three were convicted only of disobeying orders and were given light sentences.

"Throughout West Papua the Indonesian security forces are using repressive actions against unarmed civilians, especially where there is connection to fringe businesses linked to the security forces such as prostitution, illegal gold panning, sandalwood collection, timber logging, selling alcohol, etc, according to a report by the Institute for Papuan Advocacy & Human Rights .”This kind of state violent intervention forces the problems of unregulated development onto the civilian and indigenous population."

The organization accused security forces terrorizing the indigenous population by “many forms of human rights violence, murder, mysterious deaths, disappearances, rapes, arbitrary detention, extrajudicial killings, summary executions, and many others. The root of the problems and long standing conflicts in West Papua is the lack of political status of West Papua New Guinea (West Papua) as a nation within Unitary Republic of Indonesia." Asia Sentinel