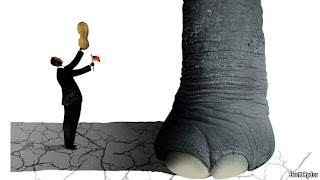 Bereft of leaders, an Asian giant is destined for a period of lower growth. The human cost will be immense

IN A world economy as troubled as today’s, news that India’s growth rate has fallen to 5.3% may not seem important. But the rate is the lowest in seven years, and the sputtering of India’s economic miracle carries social costs that could surpass the pain in the euro zone. The near double-digit pace of growth that India enjoyed in 2004-08, if sustained, promised to lift hundreds of millions of Indians out of poverty—and quickly. Jobs would be created for all the young people who will reach working age in the coming decades, one of the biggest, and potentially scariest, demographic bulges the world has seen.

But now, after a slump in the currency, a drying up of private investment and those GDP figures, the miracle feels like a mirage. Whether India can return to a path of high growth depends on its politicians—and, in the end, its voters. The omens, frankly, are not good.

Some of this crunch reflects the rest of the world’s woes. The Congress-led coalition government, with Brezhnev-grade complacency, insists things will bounce back. But India’s slowdown is due mainly to problems at home and has been looming for a while. The state is borrowing too much, crowding out private firms and keeping inflation high. It has not passed a big reform for years. Graft, confusion and red tape have infuriated domestic businesses and harmed investment. A high-handed view of foreign investors has made a big current-account deficit harder to finance, and the rupee has plunged.

The remedies, agreed on not just by foreign investors and liberal newspapers but also by Manmohan Singh’s government, are blindingly obvious. A combined budget deficit of nearly a tenth of GDP must be tamed, particularly by cutting wasteful fuel subsidies. India must reform tax and foreign-investment rules. It must speed up big industrial and infrastructure projects. It must confront corruption. None of these tasks is insurmountable. Most are supposedly government policy.

Why, then, does Mr Singh not act? Vacillation plays a role. But so do two deeper political problems. First, the state machine has still not been modernised. It is neither capable of overcoming red tape and vested interests nor keen to relax its grip over the bits of the economy it still controls. The things that do work in India—a corruption-busting supreme court, the leading IT firms, a scheme to give electronic identities to all—are often independent of, or bypass, the decrepit state.

Second, as the bureaucracy has degenerated, politics has fragmented. The two big parties, the ruling Congress and the opposition Bharatiya Janata Party (BJP), are losing support to regional ones. For all the talk of aspirations, voters do not seem to connect reform with progress. India’s liberalisers over the past two decades, including Mr Singh himself, have reformed by stealth. That now looks like a liability. No popular consensus exists in favour of change or tough decisions.

As a result, when the government tries to clear bottlenecks, feuding and overlapping bureaucracies can get in the way. When it suggests raising fuel prices, it faces protests and backs down. When it tries to pass reforms on foreign investment, its populist coalition partners threaten to pull the plug. It does not help that the ageing Mr Singh has little clout of his own: he reports to the ailing Sonia Gandhi, the dynastic chief of Congress. With a packed electoral timetable before general elections in 2014, Congress does not want to take risks.

Is it time for a change at the top? Mr Singh has plainly run out of steam, but there are no appealing candidates to replace him. Mrs Gandhi’s son, Rahul, has been a disappointment. What about a change of government? The opposition BJP is split and has been wildly inconsistent about reform. Its best administrator, Narendra Modi, chief minister of Gujarat, is divisive and authoritarian. If it formed a government tomorrow, the BJP would also have to rely on fickle smaller parties.

Some reformers pray for a financial crisis that will shake the politicians from their stupor, as happened in 1991, allowing Mr Singh to sneak through his changes. Though India’s banks face bad debts, its cloistered financial system, high foreign-exchange reserves and capable central bank mean it is not about to keel over. A short, sharp shock would indeed be useful, but a full-blown crisis should not be wished for, because of the harm that it would do to the poor.

Instead the dreary conclusion is that India’s feeble politics are now ushering in several years of feebler economic growth. Indeed, the politicians’ most complacent belief is that voters will just put up with lower growth—because they supposedly care only about state handouts, the next meal, cricket and religion. But as Indians discover that slower growth means fewer jobs and more poverty, they will become angry. Perhaps that might be no bad thing, if it makes them vote for change. The Economist