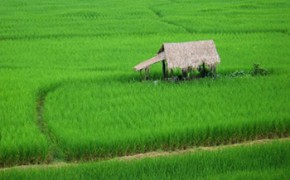 With Europe threatening to push the global economy into yet another recession, one would think this would be a time for economies to batten down the hatches, build fiscal and foreign exchange buffers, and brace for the coming storm.

Think again. Yingluck Shinawatra’s government recently introduced a new rice policy that will cause a haemorrhaging of Thailand’s public funds at a time when its economy desperately needs to improve its international competitiveness by increasing public investment in education, transport and energy.

The new policy, which was rolled out in 2011, guarantees the purchase of rice from farmers at 15,000 baht (US$472) a ton for white unmilled rice and 20,000 baht (US$630) for ‘jasmine’ rice — 50-60 percent above the prevailing market price. This new program departs from previous rice-buying schemes because of its high price, and because it fails to set any limit on government purchases. If anyone is prepared to sell, the government is duty-bound to buy.

The policy has made the government the world’s largest rice trader overnight, dealing with virtually the entire marketable surplus of rice in the country. The impact of the policy was limited in 2011 largely because that year’s floods severely damaged the rice crop. But this year rice has flowed into government storage facilities in record amounts, completely overwhelming them. Rice stocks have climbed by 12.5 million tons — well over the amount that Thailand exports in a normal year — and the amount keeps rising.

In order to offload this excess supply, the potential loss to the government could be as high as 5 per cent of Thai GDP. This may be an upper-bound estimate, but it gives a sense of the potential scale of this subsidy. There is some talk of restricting rice production in order to keep costs manageable. But apart from being an implementation nightmare, introducing production quotas would add another layer of distortion in order to correct a distorted result from a distorted policy.

Aside from its rising costs, another problem with the new rice policy is corruption. Farmers are required to sell their rice to millers, who have enough local market power to reduce the procurement price they offer to farmers, and at the same time receive compensation from the government at the procurement rate. It is hardly surprising that the number of mills in Thailand has increased over the last year. Several MPs from the ruling Pheu Thai Party also own rice mills, which may explain their enthusiastic support for the policy.

The government is waiting for the international rice price to rise so it can make a profit. But it could be waiting a very long time. Other major rice producers — especially India and Vietnam — have had a bumper year in rice production, so international prices are low. In previous years, Thailand accounted for a third of world exports. The withdrawal of Thai rice exports from the market this year has been a godsend for Vietnamese and Indian rice exporters, who would otherwise have had to contend with even lower prices.

Rice farmers in neighbouring countries have also been quick to see the advantage of smuggling their rice into Thailand to sell at a high price (the per ton purchase price of Thai rice is almost US$200 above equivalent Indian or Vietnamese rice). True, Thai rice is usually superior in quality to what is grown by Cambodia, Laos, Vietnam and Myanmar, but low- and high-quality rice are often mixed to boost the sale value.

Some might argue that these costs are worth paying because the new program helps poor rice farmers. Unfortunately, less than a fifth of the subsidy is estimated to reach poor farmers. The rest helps millers, corrupt bureaucrats and large farmers who have surplus rice production they can afford to sell. Most small rice farmers are, in fact, net rice consumers.

The reality is that Thailand’s current rice policy has almost no redeeming features. Many policies can be both populist and supportive of sustained rapid growth in the long run, but this is not one of them. Rice is the backbone of the Thai economy, so this bad rice policy is being implemented at the country’s peril.

When the current policy is up for renewal, Thailand should go back to the scheme that was operated prior to 2006, which provided farmers a guaranteed minimum price slightly below the prevailing market price. This scheme was not perfect, but it was fiscally sustainable, helped ensure a guaranteed minimum price for farmers, and allowed the Thai rice market to operate in accordance with market forces.

A return to Thailand’s pledging scheme should be used as a stepping stone toward a rice price insurance scheme that would allow farmers to purchase an option for selling at a future price. Implementing such a system may take some time, but it would provide the framework for an enduring approach toward balancing income security for farmers and an open market. If the current policy goes unchanged, it will almost definitely come to a sticky end.