Micronesia’s future between China and the US 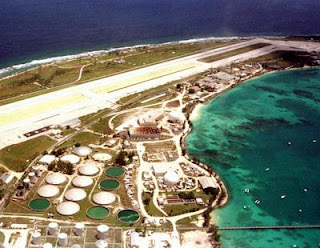 With a total land area of 702 square kilometres spread across a series of tiny isolated islands and atolls, the Federated States of Micronesia (FSM) may not be rich in land, but it does have one enormous resource, and that is its ocean.

The country’s Exclusive Economic Zone, which encompasses more than 2.5 million square kilometres, is some of the most strategically significant waters on the planet. It is an area near critical sea lines of communication and is located directly in the so-called ‘Second Island Chain’ from mainland Asia, close to all the major East and Southeast Asian Powers.

And these waters are very rich too, containing abundant fish stocks that could help feed China’s enormous population. For these two reasons the FSM is commanding the attention and money of both China and the US.

The FSM has an economic relationship with the US as a ‘Freely Associated State’ under the terms of a Compact of Free Association that was signed into law in 1986, was amended and renewed in 2003, and is set to expire in 2023. As a Freely Associated State, the FSM has received millions of US tax dollars to support and develop various sectors of their economy, including health, education, infrastructure, business and the environment. In return, the US has full international defence authority for the islands and their territorial waters.

As the Compact approaches its end the FSM is trying to secure its post-Compact future  by shifting away from its US-centric foreign policy. Since March 2000, China has invested hundreds of millions of dollars in developing its diplomatic relationship with the FSM. Most of the money has been distributed to the same economic sectors that the US–FSM Compact intended to develop. Some of the money China invested has been deposited into a Trust Fund that will help support the FSM government after 2023, when it is likely to face severe budgetary deficits as the Compact with the US comes to an end. Beijing’s money has also paid for FSM officials at every level to travel to China for meetings and training.

China has continually pushed to expand its fishing interests in the FSM’s territorial waters to the point where Chinese fishing businesses now have a vertical monopoly in the country. Initially, the Chinese offered pure grant money, but after Beijing decided, that ‘there is little return on [Chinese] investment owing to poor Micronesian performance’, they began to focus on preferential loans that would need to be repaid either with non-existent Micronesian money or through collateral.

In October 2011 a Chinese company, Exhibit and Travel Group (ETG), unveiled a huge development plan for the FSM state of Yap. Yap is roughly 800 kilometres away from Guam, where one of the US’s largest military facilities in the Western Pacific is based. The proposed development plan was consistent with the FSM’s own Strategic Development Plans for 2004–23, which involved making tourism ‘the leading economic activity in the FSM’.

As a result of these two complementary plans and with the support of Yap’s governor, in January 2012, the state council of traditional chiefs and ETG signed a memorandum of understanding with the intention of developing the island’s tourism industry and supporting infrastructure. If carried out, the provisions of the investment plan mean ETG will acquire the rights to the majority of Yap’s land, and promise to succeed where the US failed by developing key infrastructure including seaports, airstrips, roads and medical facilities while maintaining the environmental integrity of the island.

The recent Chinese involvement in Yap, and the FSM as a whole, may be nothing more than a coincidence between three interests: a private Chinese company seeking to make profit; the Chinese government trying to quell its Malthusian fears by securing a dependable food source for its enormous population; and the FSM government trying to develop infrastructure and a sustainable economic sector that a nearly 30-year-old agreement with the US has failed to develop. Yet given the FSM’s geo-political situation between China and the US, China’s ever increasing defence budget, and the proximity of these islands and their territorial waters to US military installations in Guam and the Kwajalein Atoll, there is reason to fear that something that started as mutually beneficial will devolve into something that is mutually detrimental.

If the Chinese development proposals in the FSM come to fruition, the FSM may no longer need a comprehensive assistance package from any foreign government after 2023. And if the Compact of Free Association is not renewed, the US will lose its full international defence authority for the islands and their territorial waters. But these strategically located islands will still require a foreign military for their national defence, and only time can tell whether that will be the US or China. Given the ever closer relationship between China and the FSM, it is increasingly possible to be China — but can, and will, the US allow that?

Scott Leis holds a Master of Arts from the Kansas State University. He lives in Edgewater, Maryland. East Asia Forum