Indonesian Papua violence - Did Timor teach us nothing? 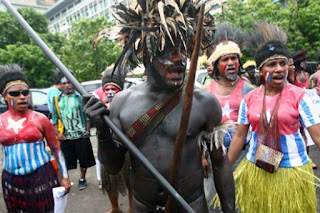 As violence escalates in West Papua, one cannot help but recall East Timor and wonder how much worse it must get before Australia and the international community will act.

Tensions are at breaking point in the easternmost province of Indonesia after the police shooting of independence activist Mako Tabuni.

Human rights activists report Tabuni was unarmed when shot six times by the Australian-trained Detachment 88 forces. Tabuni was deputy chairman of the West Papua National Committee, an organisation advocating independence and the right to self-determination under international law. Tabuni had also been campaigning for an investigation into a recent spate of military killings


The shooting follows years of violence. At least 16 people have been killed in the past month, according to human rights groups, and hundreds of homes raided, with many burnt to the ground. Thousands are reported to be evacuating, seeking refuge in the forest or heading for refugee camps in Papua New Guinea. Credible reports of human rights violations by Indonesian security forces have emerged, including torture, excessive use of force and extrajudicial killings.


Yet Indonesia's State Intelligence Agency chief, Lieutenant-General Marciano Norman, placed blame on the Free Papua Movement, ''foreign agents'' and local residents for the violence. The President, Susilo Bambang Yudhoyono, played down the events. As Indonesia obfuscates and Australia remains silent, West Papua bleeds. While most Australians are proud of our role in ending 24 years of bloody Indonesian occupation in East Timor, we should not forget it came after a long history of accepting Indonesian assertions of sovereignty while ignoring human rights abuse on our doorstep.

After East Timor, we cannot claim any wide-eyed innocence regarding West Papua.

Australia is now bidding for a place on the United Nations Security Council on the basis of our alleged ''human rights-based foreign policy'', highlighting our role in East Timor while trying to keep a lid on our history of inaction there.

The federal Attorney-General has refused freedom of information requests for the release of diplomatic cables dating to the 1970s - cables that a University of NSW professor, Clinton Fernandes, says will show Australian complicity in concealing the mass starvation of Timorese.

Are we now making the same mistakes with West Papua? Few are aware of Australian and UN involvement in West Papua 30 years before the intervention in East Timor. Like East Timor, West Papua was annexed by Indonesia in circumstances that violated international law. Comparisons are made, and with good reason. Both territories are made up of distinct minorities. Both are rich in natural resources. Both have struggled for self-determination. Like East Timor, West Papua had a UN vote for self-determination, only the outcome could not have been more different.

In 1999, East Timor got a proper vote and won independence (not before an estimated 200,000 Timorese had died). But in 1969, West Papua got a sham vote and became part of Indonesia.
Last month, East Timor celebrated 10 years of independence or, as the Timorese say, 10 years since the international community recognised their independence. But an estimated 400,000 Papuans have now been killed after more than 40 years of Indonesian oppression and abuse.

This year, Indonesia faced international condemnation for the imprisonment of West Papuan leaders for peacefully calling for independence. When asked if Australia had raised concerns with Indonesia, the Foreign Affairs Minister, Bob Carr, responded by admitting that ''before I could raise the subject … the Indonesian Foreign Minister nominated that they have a clear responsibility to see that their sovereignty is upheld in respect of human rights standards'', and Carr ''was impressed by that''.

In responses eerily similar to statements made by Gareth Evans about East Timor during Indonesian rule, Carr warned members of Parliament ''against foolishly talking up'' West Papuans' right to self-determination because it ''threatens the territorial integrity of Indonesia'' and ''would produce a reaction'' towards Australia. It would be a foolish foreign affairs minister who did not learn from our mistakes in East Timor.

Australia should, at a minimum, reconsider military aid to Indonesia and call for them to allow media and international organisations access to West Papua to investigate abuses and facilitate peaceful dialogue.

East Timor should remind us of the hefty price of turning a blind eye to repression in the mistaken belief that it serves stability in our region. As a Deakin University academic, Scott Burchill, has long argued, it is not only ''a dereliction of our ethical duty, it is politically short-sighted and usually results in blowback''. The Age, Melbourne

By Jennifer Robinson an Australian human rights lawyer in London.
Posted by Kerry B. Collison at 3:21 PM