Aung San Suu Kyi and the Rule of Law 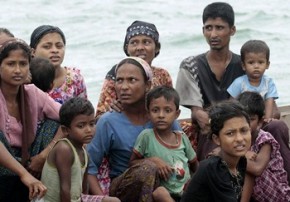 What if the Rohingya problem is 'legally produced'?

Aung San Suu Kyi’s 17-day European trip, which started on 13 June, could be called the “Rule of Law Tour.” She has been promoting the concept of the rule of law as a problem-solving tool in every single talk and press conference in Europe.

Yet her account runs the risk of being an empty promise if she continues to leave the content of the laws unchallenged.

Rule of law particularly is Aung San Suu Kyi’s default answer to the questions regarding the oppressed Rohingya minority group from western Burma who have been denied citizenship by the state, and are unwanted and openly demonized by the public at large.

The tremendous public opposition against the Rohingyas, most significantly reflected during the conflict in Arakan state early this month, demonstrates that any political leader supporting them can be accused of being a traitor.

This puts Aung San Suu Kyi in a risky position. On the one hand, any implicit or explicit support for the Rohingya is likely to entail a backlash from her Burmese supporters who are in a state of political hangover regarding the Arakan conflict. The conflict has resulted in numerous deaths and displaced many hundreds from both ethnic Rakhine and Rohingya sides. Her supporters are also in a state of denial for equal rights and citizenship to ethnic Rohingyas.

Conversely, saying anything to comfort her supporters’ anxiety regarding the loss of sovereignty to the Rohingyas endangers her international reputation as an icon of freedom and democracy. In short, expressing a sentiment beyond the reassurance of rule of law’s significance is her political suicide.

Aung San Suu Kyi, of course, is smart enough to avoid this dilemma by sticking to the ideals of rule of law. However, her strategy appears to be problematic because she only takes the laws for granted and implies that rule of law means implementing the laws properly.

For instance, when a participant at the Oslo Forum asked whether or not Rohingyas are citizens of Burma, she responded that, “We are not certain exactly what the requirements of citizenship law are…, If we were very clear as to who are the citizens of the country under the citizenship law and who qualify, then there wouldn’t be this problem… We have to have rule of law, and we have to know what the law is. We have to make sure that it is properly implemented”.

However, implementing the laws alone is not adequate. Unjust laws and their contents need to be challenged so that the laws and their ‘proper implementation ensures justice, which Aung San Suu Kyi has not seriously addressed so far.

The Rohingya case provides a very clear example why the law itself can be a source of problems. Statelessness, ill treatment, and discrimination against the Rohingyas are not simply the results of a lack of the rule of law. Quite contrary, they are legally produced. In particular, they are the results of the 1982 Citizenship Act that effectively deprived the Rohingyas of citizenship status.

Whether one agrees with the controversial ethnic label ‘Rohingya’ or not, this Muslim population has lived in the Burma-Bangladesh borderland, known today as Arakan state on the Burma side, for centuries. As in every other borderland, the inhabitants move about in the territory. They are connected by people on both sides of the border through cross-border networks of family ties, labor processes, trade relations, etc., just like ethnic Rakhines in Arakan state.

Throughout the dictator Ne Win era, deadly military operations and arbitrary categorizations of ‘national races’ undermined the Rohingyas’ historical existence in that borderland. By the late 1970s and early 1980s, they lost their indigenous status to that very specific borderland.

When the 1982 Citizenship Act was introduced, they were effectively disqualified for citizenship since the new act recognizes only the decedents of the so-called national races who had lived in the state territory prior to 1824. Rendered a non-indigenous or non-national race unlike other groups such as the Karan, Kachin, Shan etc., the Muslim population from that borderland, who called themselves Rohingyas, ‘became’ non-nationals and non-citizens, and worse, illegal immigrants.

Today’s ill treatment and discrimination against Rohingyas, as well as the popular mis-perception about their status as ‘illegal’ are all predicated on the 1982 Citizenship Act. As such, their statelessness and illegal status are not natural and automatic, but a man-made phenomenon, facilitated and fortified by the 1982 act.

To borrow a phrase from Professor Nicholas de Genova from Columbia University, the Rohingyas’ situation should be understood as the legal production of Rohingya illegality. It is the law that places this Muslim population outside the national citizenship regime; it is the law that institutionalizes their exclusion and renders them ‘illegal.’ As such, talking about the rule of law without being serious about the need to challenge unjust laws and their contents will only perpetuate the problems. Aung San Suu Kyi’s choice not to go further into challenging the laws might be her strategic choice for now, but she will have to address it sooner or later.

(Sai Latt is a Burmese PhD candidate at Simon Fraser University in Canada.)
Posted by Kerry B. Collison at 5:05 PM