Japan: a rising sun in the new West? 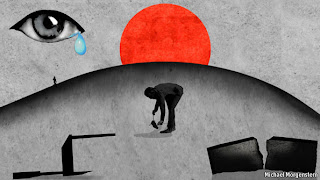 In an era likely to be marked by the rise of China, will Japan join a new West? The answer is likely to be, yes.

Japan’s policy choices can be seen as a weather vane in international politics. After the industrial revolution, Arnold Toynbee argued that industrialism would triumph over nationalism. It did not; instead, militarism came to the fore. Japan charted a new aggressive course in her attack on China in 1894, and Russia a decade later. Even her military tactics foreshadowed those used later in World War I. In the 1930s, before Italy and Germany invaded other countries, Japan had moved into Manchuria and begun a war with China. In both cases other powers followed in her wake. After her defeat in the Pacific War, Japan led a trend in the opposite direction. Long before the US and the USSR understood what was going on, Japan had already adopted the strategy of the trading state. Eschewing militarism, she forged a new path of economic development, stimulated by foreign commerce. Then, in the 1990s, Japan’s industrial stagnation neatly prefigured the US and European recessions playing out today. Japan’s collapse after 1987 should have warned the world of the economic dangers ahead.

Today, Japan has reached a similar turning point, from which she may well chart yet another new course for the world. It is true that Japan’s leadership has seen a series of weak and short-lived prime ministers, but that does not mean that Japan is no longer at the cutting edge of evolving trends. It is easy to miss the significance of what is occurring because many, if not most, experts believe that China is now the world’s juggernaut and trend setter. Europe is thought to be in its euro zone death throes, while the US confronts bankruptcy. These scenarios make headlines, but do not reflect reality. As Europe and the US come together and regain their economic feet, it is problems in China, India and Russia that appear most stark, while Japan moves increasingly to join a renascent West.

Is this consistent with Japan’s history as a trend setter? Has Japan not always been a member of the West? Actually, no. Japan agreed to station US troops in and about Japan, but did not promise (as in NATO) to render self-help and mutual aid. Nor did it agree that an attack on the US would be treated in the same way as an attack on Japan. The new West is like the EU: it is open to new members, but not by means of coercion or military pressure. Instead of colonisation, the new West is looking for democratic states which have succeeded economically, like those in the Organisation for Economic Cooperation and Development.

Japan can join the new West because of recent developments in her own governance. Partly owing to the triumph of the Democratic Party of Japan, but also because of a new course set by the Liberal Democratic Party, Japan has undertaken broader responsibilities in her military relations with Washington. She has taken on military roles in the areas surrounding Japan, including a 2004 commitment to fight alongside the US in a military crisis. Second, Japan has begun to reinterpret her obligations under the Article 9 peace clause of the Japanese constitution.

Drafted in 1946, the assumption of the constitution was that the United Nations would provide international peace and security. If it did not, however, Japan was not prohibited from making arrangements with the US in the interim. Similarly, Japan could justify participation in NATO arrangements prior to the assumption by the United Nations of full responsibility for international peace and security. It could also export military equipment, whether finished systems or components, to NATO associates.

Japan’s full participation in NATO, if it comes about, would dramatically change the global structure of power. The EU, the US and Japan combined account for 60 per cent of the world’s GDP, an amount unequalled by any other state or combination of states. China, for example, will not be able to surpass the sum of these three economies in this century, no matter what its rate of growth. In addition, Japan has a powerful contribution to make to the militaries of the US and Europe through her expertise in robotics; she already produces 70 per cent of all industrial robots worldwide.

We know that the historical example set by Japan has transformed US politics and made technology and exports a higher priority for US policy makers. It has also influenced the countries of East Asia and, together with the example set by post-war Germany, many European countries as well. By becoming part of the new West, Japan can send a strong economic and political message, which, in the end, may also attract and influence China.