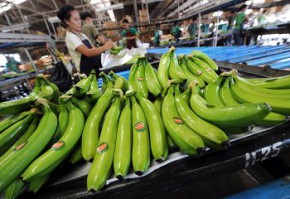 China exerts its economic muscle in the South China Sea

The standoff between Manila and Beijing over the Scarborough Shoals, which began on April 8 when the Philippines sent its navy to confront Chinese vessels fishing in the area, has begun to have economic consequences well beyond China’s recently imposed import restrictions on bananas, which account for more than 30 percent of Philippine banana exports.

In the famed (if not hackneyed) Chinese phrase involving killing chickens to scare monkeys, what is going on in the Philippines probably should catch the attention of the other eight nations that border the South China Sea, over which China claims almost total hegemony.

The dispute over the bananas actually began in March, when Chinese importers complained that the fruits were infested by pests and were therefore unsalable in Chinese markets. The Chinese are now requiring full inspections on all shipments and are not relying on clearances issued by Filipino quarantine authorities. Following the banana dispute, Chinese authorities have since begun slowing inspections of papayas, mangoes, coconuts and pineapples, sending Philippine authorities scrambling for other markets in the Middle East and other regions.

On May 13, Sergio Ortiz-Luis Jr., the head of the Philippine Exporters Confederation President, said in a radio broadcast that China had “saved” Philippine exporters during the global credit crisis when exports to traditional markets dried up, and has since become one of the Philippines’ fastest growing export markets. But since the banana spat began, Filipino businessmen complain that they have lost P1 billion (US$23.12 billion). Mindanao, a major source of exports of the fruit, has been particularly hard hit.

Despite the fact that the Scarborough standoff began a full month after Chinese authorities barred the bananas, exporters are blaming the government over its handling of the standoff, which morphed into a real confrontation with the arrival of several Chinese Maritime Surveillance Forces vessels.

However, Philippine authorities have refused to blame the Chinese in the dispute, saying exporters needed to clean up their act, and pointing to the fact that the ban preceded the Scarborough incident. A fishing ban implemented by both sides has defused the situation somewhat. Chinese authorities, however, followed up the banana inspections by impounding Philippine papayas in Shanghai following the discovery of mealybugs in 43 crates of the fruit. Filipino authorities have reacted by tightening up local inspections while the fruits are still on Philippine soil. Agriculture Secretary Proceso Alcala told reporters he was seeking “100 percent inspections” now that Chinese authorities had turned their scrutiny on Philippine fruit exports.

What the confrontation has done is highlight the Philippine economy’s growing economic links to China, now Manila’s third-largest trading partner behind Japan (US$15.4 billion) and the United States (US$13.63 billion) – and the vulnerability of those links. In March 2012, China accounted to 14.9 percent of total exports, with US$642 million in shipments, up 27.8 percent from the same month in 2011, with expectations that China will become the country’s top trading partner by 2013. Ortiz-Luis Jr. warned that electronics exports, which amounted to 52.56 percent of total export revenue in March 2012 at US$2.26 billion, could be next if the Chinese decided to get tough.

China shocked Asia in 2010 by using trade as a weapon to attempt to force policy changes on the part of countries with which it has international disputes, blocking shipments of rare earth minerals to Japan that were crucial to a wide range of manufactured products, apparently in retaliation for Japan’s detention of the captain of a Chinese fishing trawler in an incident near the Diaoyu Islands, a flock of specks which both countries claim as their own and which have been the scene of sporadic confrontations in recent years. The Japanese claim the islands as the Senkakus.

Later, the Chinese slowed rare earth shipments to the United States and countries in Europe as well, claiming they were attempting to clean up the rare earth mining industry, which has caused disastrous pollution in many areas where the minerals are mined. The embargo, if that is what it was, was viewed by analysts as the latest indication that China was willing to use economic clout to get its way in policy disputes.

The bigger point is that if China decided to get tough on the Philippines, it is obviously the Philippines that would come out the loser. In recent years the Philippine economy has made major upward strides, particularly because of inward remittances from overseas workers, at US$20 billion a year, and business process outsourcing, now at US$13 billion.

The Philippines, like other Southeast Asian countries, has lately begun to benefit from the exodus of low-end Chinese manufacturing as labor costs have grown, particularly in semiconductor components, computer parts, construction materials such as metals, cement, bricks and tiles. In addition to bananas, China imports pineapples, coconuts and seeds. China also imported roughly US$5.7 billion in mining minerals from the Philippines. In 2009 and 12010, according to the latest United Nations Trade and Development (UNCTAD) report on trade dependency, China topped all leading destination markets for Filipino commodity exports, followed by Japan, the United States and Singapore.

Trade in the region now amounts to US$5 trillion. With Vietnam, the Philippines, and China in particular continuing to squabble over vast potential oil and gas reserves, China, as with the confrontation over the Scarborough Shoals, has backed up its territorial claims with gunboats, thus turning the littoral nations more and more towards the United States. It remains to be seen if China’s attention to bananas could grow to include Indonesian coal, Malaysian timber and other like palm oil, for instance, if the other nations bordering the South China Sea were to get too obstreperous. Asia Sentinel