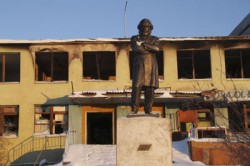 In December 2011, thousands of people rallied in Moscow and other cities across Russia to condemn alleged ballot rigging in parliamentary elections following the lower house elections last year.

These demonstrations can, in part, be attributed to a vague sense of anxiety over Russia’s future.
Putin has been stressing his commitment to prioritising the interests of the people and alleviating their discontent and unease, even as he develops policies designed to boost national prestige, such as the expansion of the arms industry, the development of space, and investment in Siberia and the Far East. In conjunction with the APEC Summit, to be held in Vladivostok in September 2012, Putin has accorded his highest priority to the development of Siberia and the Far East.

As if in response to the public’s anxiety, President Vladimir Putin published seven articles in the lead up to the 2012 presidential election where he outlined his views on issues relating to the economy, political reform, security, foreign policy, ethnic affairs and social welfare. He is said to be currently working on a ‘road map’ to realise the ideas presented in these articles. Certain political reforms, such as the reinstatement of direct gubernatorial elections, have already been implemented under former president Medvedev.

In his article on foreign policy, Putin expressed his wish to leverage the growth potential of the Asia Pacific — above all that of China — to invigorate Siberia and the Far East. In keeping with this idea, the Ministry of Economic Development prepared a draft bill to establish a goskorporatsiya (‘state-run corporation’) directly answerable to the president to undertake developments in Siberia and the Far East. The draft bill, which is currently being considered by the government, would allow the corporation to utilise mineral, forestry and land resources in Siberia, east of the Urals, and in the Russian Far East (nearly 60 per cent of the nation’s territory) free from federal restrictions. The draft bill would also grant the corporation very significant tax benefits. Neither federal nor local agencies would be able to interfere in the activities of this ‘state-run corporation,’ which would only be subject to scrutiny by the president and the Audit Chamber.

There has been strong opposition to these plans from both inside and outside the government. The Ministry of Finance has objected saying the proposed corporation will be an obstacle to securing revenues, while the media has warned that the corporation will become a new wellspring of corruption. The media has also cautioned that the birth of a powerful state-run monopoly will exert undue pressure on the activities of private companies, and that creating an ‘offshore’ enterprise inside Russia will undermine the country’s political and economic coherence. It seems Putin himself supports the creation of this corporation, but it is unclear whether he will be able to overcome these criticisms and succeed in founding it.

The Putin administration’s eastward orientation presents Japan with opportunities. Japan’s need to secure energy resources is becoming increasingly urgent following the nuclear disaster in Fukushima, making the Russian Far East all the more important as a supplier of resources for Japan. Fortunately, Japan has been interested in the Far East developments since the Soviet era, even participating in joint Japan–Soviet projects involving public–private collaborations. Japan should be able to make the most of Russia’s eastern pivot.
But there are some causes for concern for Japan. Rapid growth in China and South Korea has spurred the view among Russians that they no longer have to depend on Japanese funding and technology. Putin’s foreign policy article repeatedly cited the importance of the Asia Pacific, as well as China and India, but made no mention of Japan. And Japan’s diminishing presence could discourage opportunities to resolve the Northern Territories issue and other matters of concern between the two countries.

In parallel with talks to resolve the Northern Territories issue, Russia should seriously consider ways in which Japan can participate in the development of Siberia and the Far East region. This will require Japan to play the unique advantages it has over its Asian competitors. Japan’s strengths lie not only in its outstanding technology but also in the infrastructure that gave rise to this technology, such as its corporate networks, human resources development and industrial finance systems. With the Russian government now ‘pivoting’ toward the Far East region, the time has come for Japan to boost its presence, increase its influence and expand its economic cooperation with Russia through coordinated public and private sector efforts.

Hironori Fushita is Research Fellow at the Japan Institute of International Affairs.
This article was originally published as an AJISS Commentary.