Security forces on guard in Papua after shooting 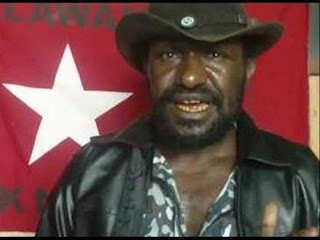 Police confirmed Tabuni's death saying he was shot in the hip and leg and died on his way to hospital on Thursday. [Facebook: Free West Papua Campaign]  Radio Australia reporting

Indonesian security forces in Papua are guarding the region around Jayapura after a pro-Independence leader was shot dead, sparking riots.

Mako Tabuni, the deputy head of the West Papua National Committee was killed by security forces on Thursday and an Australian-trained counter terrorism unit has been implicated in the death.

Mr Tabuni was gunned down in the street by security forces near the town of Jayapura.
Papuan Independence activists say the force was led by members of the Australian trained counter-terrorism unit, Detachment 88.

But the unit's role could not be confirmed independently.

Police say Mr Tabuni was killed while resisting arrest but they offered differing accounts of whether he was armed at the time.

They blame the group for a series of unexplained shootings in recent weeks and they've launched sweeping raids on its supporters.

Mr Tabuni had been campaigning for an investigation into a series of recent shootings.
The committee had also been calling for a referendum on Papuan self-determination.

News of his death brought people out onto the streets of Jayapura and Waena and some of them torched shops and vehicles.