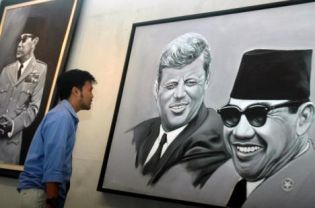 A man takes a close look at a painting of Indonesia’s first president Sukarno during an exhibition titled “111 Soekarno in Black and White,” by artist Suherman, in Bandung. (Antara Photo/Agus Bebeng)

Old documents reveal that on Aug. 4, 1965, Indonesia’s first president, Sukarno, collapsed in his room at Merdeka Palace. An early diagnosis showed that he had suffered a stroke.

His deteriorating health came at a time when the Indonesian Communist Party (PKI)’s influence was beginning to grip the country, prompting a heated rivalry with the Army. A team of doctors from China treated Sukarno, adding to suspicion that the president had links to the communists.

In March 1967, Suharto became acting president, and was officially inaugurated the following year. Sukarno was not allowed to travel to the capital.

Sukarno sent his daughter Rachmawati to ask Suharto if he could return to Jakarta. He was allowed to be transferred, under strict solitary confinement, to Wisma Yaso in Jakarta, which was the residence of Sukarno’s Japanese-born wife, Dewi.

On June 6, 1970, Sukarno’s 69th birthday, Rachmawati and Sukarno’s son Guntur were allowed to visit him. Rachmawati recalled that Sukarno’s body had swelled from kidney failure, which had never been properly treated.

There was a complete ban on the press covering Sukarno’s condition. Relatives and friends were prohibited from visiting him.

An Associated Press photographer took a picture of Sukarno using a telephoto lens. Rachmawati also photographed her father, which prompted the military police to interrogate her. Rachmawati demanded to know the real status of his father and was told, “Sukarno is under detainment.”

There was no legal status for Sukarno. He suffered years of improper medical treatment. The military police’s statement to Rachmawati was the only account of his status. Not long after Rachmawati last visited her father, he died.

Unlike Sukarno, Suharto enjoyed the luxury of legal protections and extraordinary press coverage after he stepped down as president. Live coverage gave a minute-by-minute account of Suharto’s deteriorating health at Pertamina Hospital.

Suharto was summoned to the Attorney General’s Office on charges of corruption. He was named a suspect in an embezzlement case related to his charity foundations. He died of organ failure and was given a state funeral with full military honors. President Susilo Bambang Yudhoyono himself led the ceremony.

“I, on behalf of the nation and the Indonesian Military, surrender the body and soul of Hajji Muhammad Suharto to the soil of the motherland,” he said.

Several attempts to bring Suharto to court failed over the last decade of his life because he was said to be too ill.

But Suharto is given credit for bringing stability and economic growth to Indonesia and the region.

Sukarno’s legacy is that he freed the nation from imperialism and colonialism. He also gave birth to Pancasila, the Indonesian state ideology. As the country’s first president, Sukarno has long been regarded as a symbol of national unity. He was a revolutionary fighter and a charismatic leader who united a nation through his personality.

Sukarno and Suharto left legacies of their own times.

Now, Jimly Assidiqie, the former chief justice of the Constitutional Court, has called for Sukarno’s name to be cleared because he was never tried or found guilty in a court of law. He has called on Yudhoyono to render clemency to the country’s founding president.

“Though the president has the prerogative, we still think Sukarno deserves more as a historical figure and Indonesia’s first president,” Assidiqie said.

If Corby’s appeal for clemency was granted by the president, who cut five years from her 20-year sentence, it would be fair to award clemency and clear Sukarno’s name. Only then will Yudhoyono leave a legacy to be remembered.

Yanto Soegiarto is the managing editor of Globe Asia, a sister publication of the Jakarta Globe.