Burma and the sectarian flashpoint 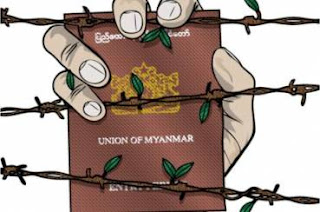 Aung Zaw, the editor of the independent Chiang Mai-based Irrawaddy Magazine, visited Rangoon earlier this week to assess the situation after violence broke out in Burma’s western Arakan State. This is his report, reprinted from The Irrawaddy.

Wednesday in Rangoon I witnessed firsthand the tensions that are gripping not only Arakan State, where days of sectarian violence have raged, but also, increasingly, other parts of Burma.

Walking around the city, I saw Buddhists and Muslims smiling as they came and went from temples and mosques that were full of people praying for peace. At the same time, however, I noticed that police had been deployed near Shwedagon and Sule pagodas, the city’s most famous religious shrines.

“I think the most important lesson we need to learn from it is the need for rule of law,” Suu Kyi told journalists after a speech in Switzerland on her first trip out of the country since she was confined to her home in Rangoon 25 years ago, referring to the ethnic and religious violence in different parts of Myanmar. “We have said again and again … that rule of law is essential if we are to put an end to all conflict in our country. Without the rule of law such communal strife will only continue. We need the cooperation of all peoples to bring this to an end.”

Beneath its calm exterior, Rangoon seems to be bracing for an outbreak of sectarian conflict. The question on everyone’s lips is whether the violence in Arakan State will spread to Burma’s largest city, which is home to people of many faiths, including Buddhists, Muslims and Hindus.

One man I spoke to, a businessman, said that he has enough food and water in his house to last a month—just in case. He even confided that his stockpile included weapons.

But even as fear of religious conflict grips the city, there are many who insist that the situation in Arakan State is not really about religion at all. One prominent public figure taking this position is Ko Ko Gyi, the 88 Generation leader who last week declared that the “Rohingya issue”—that is, the status of Arakan State’s Muslim minority—is essentially a matter of sovereignty.

When I asked him what he meant by this, he said that it wasn’t for other countries to decide who qualifies to be recognized as a citizen of Burma. He said he sympathized with the Rohingya, many of whom have suffered as refugees in other countries, but added that they still could not be considered one of Burma’s 135 ethnic groups.

Some non-Burmese have reacted to Ko Ko Gyi’s remarks with a certain amount of consternation, believing that he, as a former political prisoner, should have stood up for the rights of an undeniably oppressed group. But inside Burma, his words were welcomed and spread quickly on Facebook, while local journals that reported his views soon sold out. The consensus among Burmese, it seems, is that the Rohingya are illegal migrants from neighboring Bangladesh—a view that also treats this as an issue of sovereignty rather than religious animosity.

Indeed, many—especially ethnic Arakanese—have been resentful of the portrayal of this as a religious conflict, even though many have resorted to racial and religious slurs in their verbal attacks on the “Bengalis,” as they prefer to call the Rohingya.

The Arakanese are fiercely proud of their ethnic identity, even drawing a strong line between themselves and their fellow Buddhists, the ethnic Burman majority. In the minds of many Arakanese, then, this is a struggle to preserve that identity. They believe that if they don’t push back against the Rohingya, their own culture will be threatened by an influx of “aliens” from a country many times more populous than their own homeland.

For other observers, however, the concerns are very different, but no less pressing. Tin Oo, a veteran leader of the opposition National League for Democracy, which just months ago finally joined the government-led reform process by entering Parliament, told me he worried that the violence in Arakan State could delay this delicate transition to a more democratic form of governance.

As a former commander-in-chief of Burma’s armed forces who was once posted in Arakan State, Tin Oo said that the region has always had the potential to become a breeding ground for sectarian violence. If it finally realizes that potential now, it could be a serious setback for those arguing for the need to open the country further, he said.

So far, President Thein Sein has handled the situation in Arakan State carefully, imposing a state of military emergency under Section 413 of the country’s 2008 Constitution—the first since his government came into power last year—but also urging all sides to set aside their differences in a television address to the country.

“If we stick to endless hatred and revenge by killing each other, it’s possible that the danger will be more widespread, not only in Arakan State,” warned Thein Sein, adding that the country’s “fledgling democracy” could easily become a casualty of the violence.

I happened to be with a group of former generals during the broadcast of Thein Sein’s speech, but it was difficult to know what they thought about the issue. One who was sitting next to me signaled his agreement with the president’s words, but then fell silent, as if resigned to the cycle of violence that seems to fuel conflict after conflict in the country.

Many people I spoke with agreed that this was a major challenge for Thein Sein. “It’s not going to be an easy ride,” said one diplomat.

While it was still far from clear how this situation would turn out for the president, some observers seemed relieved when he allowed senior UN officials to visit Arakan State—in marked contrast to the former regime’s instinctive impulse to hide the country’s dirty laundry from the eyes of outsiders. Some long-time political observers whispered, however, that hardline elements within the military may have had a hand in the violence, though they could offer no hard evidence. Others said that the army wanted to launch a military operation to drive out the Rohingya, but the president did not give the green light.

In an effort to increase transparency, last week the government formed a committee to investigate the rape and murder of an ethnic Arakanese woman that sparked the violence, as well as the lynching of a group of Muslims that led to a series of attacks and counterattacks by Rohingya and Arakanese mobs.

While many educated Burmese saw this as a step in the right direction, on the streets, popular opinion was more in favor of taking a hard line against the Rohingya.

Many decried the corruption of immigration officials, who they blamed for letting the “Bengalis” into the country in the first place. One wealthy businessman, who had hastily raised a large amount of money to donate to Arakanese displaced by the violence, even suggested building a strong fence to defend the country from further incursions.

Even a veteran political activist bristled when he heard that the US had expressed concern over the Rohingya issue. “I want to know how the US handles its border with Mexico and how they treated Muslims after 9/11,” he said angrily.

In the absence of any hard information about what is actually happening in Arakan State right now—due, in part, to government efforts to rein in “irresponsible” media—and the lack of a healthy, rational debate on the status of the Rohingya, it seems unlikely that the situation there will improve anytime soon. And that’s bad news for everybody.
Posted by Kerry B. Collison at 4:46 PM