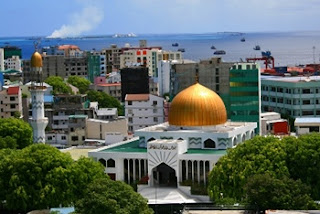 Does that mosque in Male look deceptively friendly?

Democracy suffers in Maldives in the face of rising fundamentalism

The Indian Ocean paradise Maldives, until recently a moderate Muslim state, is the latest Asian country to witness a troubling rise in ultraconservative Wahhabi Islam imported from the Middle East. Male, the country’s capital.

On June 2, Ismail Rasheed, popularly known as ‘Hilath,’ was attacked outside his home when his throat was slit through his trachea, missing a vital artery by millimetres. Rasheed, an outspoken blogger advocating freedom of religion and a fierce critic of the growing religious extremism in the archipelago country, is expected to survive the near-fatal attempt on his life, the second. The gruesome assault on Rasheed cannot be treated as an isolated episode. It is an upshot of the rising religious radicalization in Maldives, whose constitution does not allow any national to practice a religion other than Islam.

Religious intolerance has been rising steadily in the country, which lies about 700 km south of the Indian coast. According to a 2010 US State Department report, “NGO sources …stated that in general the media practice self-censorship on issues related to Islam due to fears of being labelled ‘anti-Islamic’ and subsequently being harassed.” The Ministry of Islamic Affairs blocks antic-Islamic websites as well as sites featuring information on Christianity. Statements contrary to government policy or to the government's interpretation of Islam are blocked by law.

Under the reign of the former President Mamoun Abdul Qayoom, the island country strived to remain moderate. However, the inroads made by Islamic fundamentalists among Maldivians travelling and living in other Islamic countries has paved the way toward the foundation of a thriving Wahhabi movement. As conservatism has spread among the 395,000 population, the majority of them Sunni Muslims, so has a hard refusal to allow any religious deviationism.

In 2010, Mohamed Nazim, a Maldivian, faced the rage of a violent mob consisting of about 11,000 people who demanded an apostasy punishment of death for publicly declaring himself as a non-Muslim. After three days of counseling by the Ministry of Islamic Affairs, Nazim apologized before journalists for his action. In the same year, Ismail Didi, a young self-proclaimed atheist, committed suicide after he had failed to secure political asylum abroad.

Ismail Rasheed has received repeated threats to his life for voicing his concerns about religious extremism. He used his blog extensively to critique the radical conservatives through perceptive and satirical writings. He asserted his firm orientation toward Sufi Islam in a country where Sufis and Shias are considered apostates. He has claimed he is being persecuted by hard-line Sunnis because of his demand for a liberal interpretation of Islam in a country whose constitution favors the practice of Sunni Islam.

Rasheed’s blogs were blocked by the Communications Authority of Maldives (CAM) in 2011 on the order of Ministry of Islamic Affairs, which claimed the blog possessed ‘anti-Islamic’ material. The first assault on his life took place in December 2011 at the Artificial Beach, a popular place for sports, games and events such as live music shows in Male, where he joined a group of 30 Maldivians who had gathered at a peaceful protest on International Human Rights Day to call for religious freedom. The group was attacked by stone-throwing members of religious advocacy groups. While it remains uncertain whether the assailants actually intended to murder Rasheed, his skull was fractured in deliberate violence unleashed on him.

Rather than arresting his assailants, police arrested Rasheed on the insistence of religious conservatives led by the Adhaalath Party and the NGO Jamiyyathu Salaf, which demanded legal action against the participants of the gathering. Rasheed was called a prisoner of conscience by human rights groups and networks across the globe who had criticized his arrest.

The skepticism about the Maldivian government’s commitment to democratic principles of freedom of speech and expression has grown in the backdrop of the government’s reaction to the brutal attack the activist earlier this month. While condemning the attack and the use of violence, the Human Resource and Youth Minister reiterated that Maldives is not a secular country and warned of that disagreements by extremists are plausible. As of today, the police have made little progress in finding his assailant. Some suspect possible sabotaging of the case to please the fundamentalists.

Maldives, like many other countries in the world, fits a description of democracy in which popular attention to real democracy remains constrained, with the government paying only lip service to its forms but not its core values. According to the scholar Amitai Etzioni, the world today conflates its understanding of democracy with liberalism. The casting of votes by the people of a territory toward electing a government is indispensable for a flourishing democracy irrespective of the commitment of the elected government toward liberal principles such as individual’s freedom of speech and expression, indispensable civil liberties and rights of individuals.

In Maldives, the parliament’s decision to create a multiparty system in 2005 was upheld as significant progress in welcoming democracy to the country. In this regard, the emergence of the conservative Adhaalath party is criticized to have contributed toward the precarious swelling of religious intolerance, which threatens the realization of substantive democracy in Maldives. Although many scholars believe in the compatibility between Islam and liberal democracy, the Wahhabi movement in Maldives has been able to radicalize the religion by encouraging the use of violence to suppress voices of dissent.

Yet Maldives continues to be called a democracy. The forthcoming days are critical to see if they affirm the fundamentalist belief that democracy is a scourge to the freedom and individual rights of Maldivians.

(Annapoorna Karthika is a Research Officer at the Institute of Peace and Conflict Studies in New Delhi.)
Posted by Kerry B. Collison at 3:33 PM