Another Religious Travesty in Indonesia 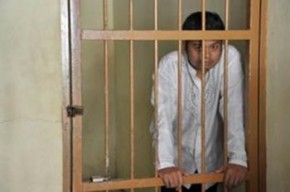 Once again religious intolerance has burst into the open in Indonesia, where a judge sentenced a professed atheist to two and a half years in prison instead of prosecuting the mob that chased him down and beat him badly after he posted his lack of religious affiliation on Facebook.

Over the objections of activists and a wide range of international organizations, a West Sumatran court Thursday sentenced Alexander Aan, a 32-year-old Sumatran civil servant, to prison while those who attacked him faced no justice.

Among other things, Aan was accused of uploading three articles critical of the Prophet Mohammad including one describing the prophet as being attracted to his daughter-in-law – which, according to Muslim Hadiths, or narratives of the sayings or customs of the prophet and his companions, was true. Mohammad was said to have fallen in love with Zainab, daughter of Jahsh, while she was the wife of Zayd bin Harithah, his own adopted son. The website also carried another tale in which Mohammad had slept with Mariyah, a Copt who was a maid to one of the prophet’s other wives – which was also taken from a Hadith.

The sentence for Aan is the latest in a string of such prosecutions in an increasingly ugly religious atmosphere which is being perpetrated by a relatively small handful of extremists in a country that has long been characterized by tolerance. Most recently the Islamic Defenders Front, the most violent of the groups, forced the cancellation of a sold-out performance by the popular entertainer Lady Gaga.

In the most terrifying incident, a howling mob descended on the compound of members of the Ahmidiyah sect in February 2011, beating three of them to death and nearly hacking the arm off one of the sect members who tried to stop them. A district court found the wounded man, Deden Sujana, at fault and sentenced him to six months in jail. The same court gave the 12 leaders of the mob sentences of three to six months for carrying out the attacks, which millions saw on YouTube.

Aan came into the public spotlight in January when the mob assaulted him. But instead of arresting and charging the leaders of the mob, prosecutors charged him with hate crimes under the 2008 Information and Electronic Transactions Law and with blasphemy under the Criminal Code, which carries a maximum prison sentence of six years and fines of up to Rp1 billion ($106,000).

Hendardi, a prominent Indonesian human rights activist, argued that Alexander should never have been charged. He pointed out that Indonesia had ratified the International Covenant on Civil and Political Rights, which meant the government was obliged to protect members of minority faiths, including those identifying themselves as atheists. He also said the case against Alexander violated his right to free speech.

Hendardi opposed to the sentencing, described the trial as a case of criminalization, pointing out that Aan’s Facebook post in no way constituted incitement or provocation, as prescribed in the ITE law and the Criminal Code.

“Setara in no way condones the content of Alexander’s Facebook post, but the right of each citizen to free expression must be guaranteed, including Alexander’s,” Hendardi said. “This case is about the criminalization of free expression, of which anybody can become a target. The Setara institute calls for the court to free Alexander.”

Human Rights Watch, along with a half dozen other Indonesian and international organizations including the Office of the United Nations High Commissioner for Human Rights, gained thousands of signatures on a petition to President Susilo Bambang Yudhoyono in support of Aan, pointing about that the president had spoken at Harvard in September of 2009 saying that Indonesia could “project the virtue of moderate Islam throughout the Muslim world. We can be the bastion of freedom, tolerance and harmony. We can be a powerful example that Islam, democracy and modernity can go hand in hand.”

Aan’s recent beating, arrest and charges “now make us hesitate, fearful even for our own safety, wondering 'Will we be safe when visiting Indonesia?'. Every single one of us, Indonesian and non-Indonesian, who have signed this petition care a great deal about the people of Indonesia, their safety, their freedoms and human rights, as well as our own as guests in your country.”

The petition called the action against Aan “clearly a setback for all of us who have struggled for and embraced freedom, democracy, and human rights since the fall of the dictatorship in 1998. It is crushing to realize that all we have worked and hoped for is in vain in the face of such laws.” The tragedy that has befallen Alex Aan, it continued, “is a sad reminder that the Indonesian government has failed to fulfill its international human rights obligations to its own citizens, However, judge Eka Prasetya Budi Dharma said Aan had been proven guilty of defaming Islam and insulting the Prophet Muhammad through his Facebook account and a fan page titled Ateis Minang (Minang Atheist).

Aan said after the trial that he accepted the judges’ decision and that he regretted his actions. In an earlier written statement, he said he posting the assertion on Facebook, which was “liked” by more than 1,000 Facebook users. Alexander also declared that he did not believe in angels, devils, heaven and hell or other “myths.”

Aan’s arrest sparked outrage among Indonesians and international activists, who showed their support on his Facebook group and circulated petitions to have his charges dropped. Asia Sentinel
Posted by Kerry B. Collison at 2:51 PM