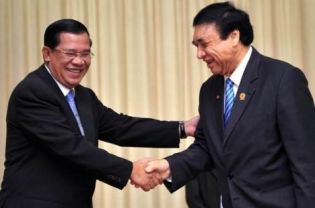 Cambodian Prime Minister Hun Sen, left, shakes hands with Nyan Lynn, right, deputy secretary-general of the Asean Political-Security Community (APSC) on the sidelines of the 6th Association of Southeast Asian Nations Asean Defense Ministers' Meeting in Phnom Penh on Tuesday. Cambodia is hosting the Asean Defense Ministers' Meeting (ADMM) from May 28-30. (AFP Photo/Tang Chhin Sothy)
“I not only weaken the opposition, I’m going to make them dead ... and if anyone is strong enough to try to hold a demonstration, I will beat all those dogs and put them in a cage.”

No, this was not Muammar el-Qaddafi in his infamous “cockroach” speech in 2011, when he urged his supporters to go “house to house” to kill the opposition. The speaker was Prime Minister Hun Sen of Cambodia, responding with typically threatening language to the suggestion by a Cambodian critic that he should be worried about the overthrow of a dictator in Tunisia.

Often overlooked in discussions about the world’s most notorious autocrats, on Friday Hun Sen will join the “10,000 Club,” a group of strongmen who through politically motivated violence, control of the security forces, massive corruption and the tacit support of foreign powers have been able to remain in power for 10,000 days.

With the fall of dictators in Tunisia, Egypt, Libya and Yemen, the ranks of the 10,000 Club have been depleted, making Hun Sen one of the 10 longest-serving political leaders in the world.

A former Khmer Rouge commander, Hun Sen has proven to be a highly intelligent and ruthless leader, able to keep his domestic opponents and international critics off balance. His main tactic has been the threat and use of force.

In March 1997 his personal bodyguard unit colluded in a grenade attack on a rally led by the opposition leader, Sam Rainsy, in which 16 people died and more than 150 were injured. Because an American citizen was wounded, the F.B.I. was sent to investigate. Its chief investigator concluded that the chain of command led to the prime minister.

Months later, fearful of losing the next election, Hun Sen staged a coup against his royalist coalition partners. Units under his command committed more than 100 extrajudicial killings. My UN colleagues and I dug up bodies of men stripped to their underwear, handcuffed, blindfolded and shot in the head. No one has ever been held accountable.

One of the most acute problems in Cambodia now is a massive land grab by Hun Sen’s cronies through what the government calls “economic land concessions.” This has led to widespread protests, but they carry severe risks.

In April, Chut Wutty, Cambodia’s best-known environmental activist, was gunned down while researching illegal timber sales. The government first claimed he died in a shootout, then that he had been killed by a soldier who had subsequently managed to commit suicide by shooting himself twice in the chest. Last week, 13 women protesting their forced eviction from prime real estate in Phnom Penh — sold by the government to a crony company and its Chinese partner — were whisked off to court and summarily sentenced to prison terms.

Widespread corruption is the subject that makes Cambodians most angry. Though Hun Sen has worked only for the Cambodian government since 1979, he appears to be fabulously wealthy. Ten years ago a US State Department official told me the US government estimated his personal wealth at $500 million. When I repeated this figure last year to a different US official, he said, “Is that all?”

Today Hun Sen rules Cambodia with an iron fist, a fact that no Phnom Penh diplomat would dispute, but few confront. He has forced opposition leader Sam Rainsy into exile after orchestrating a prison sentence of 10 years for an act of nonviolent protest. The country goes through the trauma of manipulated elections every five years in which no one imagines that the vote will be free and fair or that an electoral defeat would result in Hun Sen leaving power.

In 1998, after government-manipulated elections, tens of thousands of protesters poured into Phnom Penh’s streets. In a Tahrir Square-style show of defiance, they set up a “Democracy Square” in a park and demanded a recount or new elections. Hun Sen ultimately sent in his shock troops and cleared the park. Western governments muttered their disapproval but did nothing. When Cambodians had their “Khmer Spring,” the world let them down.

At 59, Hun Sen is the youngest member of the 10,000 Club. He has said that he wants to rule until he is 80. After all the pious post-Arab Spring diplomatic talk about confronting dictatorships, Cambodians can be forgiven for asking why no one seems to be paying attention while Hun Sen begins work on his next 10,000 days.

Brad Adams is Asia director at Human Rights Watch and worked as a lawyer with the United Nations in Cambodia.
Posted by Kerry B. Collison at 3:07 PM