Will Myanmar's Soldiers Return to Barracks? 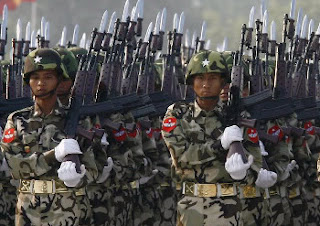 Civil-military relations and constitutional reform in a changing society
The rule of law and the constitution matter. This is evident in Myanmar, where current steps towards constitutional amendment have the potential to determine the future direction of the country's transition process. A key issue is whether the role of the military, as defined by the Constitution of Myanmar, will be changed.

A constitution in any democracy must clearly define the position of the military and provide for appropriate national defense, while providing mechanisms to prevent the misuse of power. There should be civilian control over the military, and the military should be subordinate to the executive arm of government in particular. To achieve this, the military cannot also be part of the legislature, nor have the power to appoint ministers.

In Myanmar the military is under the control of the Defense Services Commander-in-Chief, who is appointed by the President. But the President's appointment is subject to the approval of the National Defense and Security Council, a majority of whose members are from the military. In practice, this means the military has significant influence in appointing its own commander. The Constitution does not specify the term of the Commander-in-Chief, the qualifications the position requires or the circumstances in which he could be removed from his position. In contrast, the office of the President has a clear term, the candidate must meet set requirements, and there is a clear process for removal from office.

There are further differences in relation to the composition of Parliament and the election of members. The Commander-in-Chief has the power to nominate the Defense Service personnel in both houses of Parliament, which makes up 25 per cent of the seats. He also has the power to recommend the appointment of the Minister of Home Affairs, Border Affairs and Defense.

The 2008 Constitution creates a complex relationship between the President, the Commander-in-Chief and the military-dominated National Defense and Security Council. Contrary to some recent reports, it is unclear which position has the most power, but the office of the President appears to be subject to greater regulation, at least in comparison to the Commander-in-Chief.

In addition to being subordinate to the executive, the military must not be immune from the law and should also be required to comply with human rights obligations. There are several different approaches to military justice in democratic countries. In some systems, a crime committed by a military officer may be heard by the general courts, and in other contexts such cases are heard by a system of special military courts.

For example, Indonesia has a system of Military Courts with a right to appeal to the Supreme Court, a general body. There has been recent public debate in Indonesia about whether the matters that go to military courts would be dealt with more fairly by the general courts. The Constitution of Myanmar also provides for a system of courts martial, with an ultimate appeal to the Commander-in-Chief. In contrast to Indonesia, there is no right to appeal to the Supreme Court in Myanmar, which means that the decision of the Commander-in-Chief is not subject to review.

Special military courts allow for a degree of specialization because they are constituted by judges who have a background in the military. But one concern is that these judges may be less independent in their decision-making. Instead, using the general court system to determine cases concerning the military suggests that military officers are subject to the same law and institutions as everyone else.

This is why it is important that the current constitutional amendment process clarify the role of the military. Formal changes to ensure that the military is subject to the control of the executive, and that there are clear limits to its power, would be an important step.

But while the formal safeguards of an amended Constitution will help Myanmar transition to democracy, substantive changes matter too. It is equally important that there exists a culture and mentality within broader society that the military should in fact play a subordinate role to the executive, have no influence over the legislature, and remain subject to the rule of law. Recent reports highlighting the excessive role and dominance of the military are one indication that such a cultural shift may now be occurring.

(Melissa Crouch is a Postdoctoral Fellow at the Law Faculty, the National University of Singapore. From 8–10 May 2013, Dr Crouch participated in the Myanmar Constitutional Democracy Workshop hosted by the Sydney Law School in Yangon.)