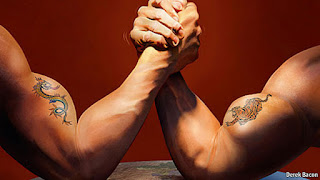 But nobody knows exactly what ‘new big power relations’ will mean for Sino-Indian relations. For all their geographical closeness, China and India are remarkably unfamiliar with each other. Bilateral interactions are frequently fraught with miscommunication. In mid-April, a long-running boundary dispute in the western Himalayas flared up again when India and China moved more troops to the area. Both countries have since withdrawn to their previous positions, ending the standoff. Indian external affairs minister Salman Khurshid spoke of the incident as just an ‘acne’, a minor blip that is to be expected as China and India’s relationship continues to ‘grow up’. He is probably correct, but the standoff does raise the question of how either country could have engaged in such a juvenile and potentially risky exercise.

Economic cooperation has often been called in to smooth over border disputes. Bilateral trade increased from US$2.9 billion in 2000 to around US$80 billion in 2012. China is now India’s third-largest export partner and the largest source of imports into India. India is China’s seventh-largest export partner and the 20th-biggest source of its imports. Leaders of both countries have confidently proposed to increase bilateral trade to US$100 billion by 2015.

But the economic relationship between the two countries is asymmetrical. India runs a large trade deficit with China, which increased from US$4.3 billion in 2006 to US$27 billion in 2011. And bilateral investment is still relatively insignificant. Despite increasing seventeen fold from 2006 to 2011, China’s investment in India only accounts for around 0.2 per cent of India’s total foreign investment. India’s investment in China makes up an even smaller 0.01–0.05 per cent of China’s overall foreign investment. Additionally, India’s concerns about its increasing trade deficit with China have frequently prompted it to initiate anti-dumping investigations on imports from China. Chinese companies also complain that India discriminates against Chinese investment.
Against this backdrop, Premier Li Keqiang’s visit provides a golden opportunity for both countries to write a more positive chapter in Sino-Indian relations.

The foundations of this renewed relationship should be based on the comparative advantages of both countries. China’s manufacturing sector is still very competitive, even by international standards. But more and more Chinese companies will increase outbound investment in the face of rising labour costs in China and Beijing’s official policy of ‘going abroad’, which encourages Chinese companies to invest more aggressively in overseas markets. India should seize this opportunity to attract Chinese investment. Such investment would not only allow India to acquire cutting edge technologies but also, more importantly, create more job opportunities, especially for unskilled labourers.

Another area where there is huge potential for mutual cooperation is infrastructure investment. The ‘China Miracle’ that we have witnessed in the last three decades highlights the importance of investing in infrastructure to achieve growth. India has also realised this. India’s Twelfth Five Year Plan aims to increase infrastructure investment to US$1.2 trillion, which accounts for 8–8.5 per cent of its GDP. Fulfilling such an ambitious goal will require significant amounts of foreign investment. Following the sharp decline of outbound investment from the United States and Europe in the aftermath of the global financial crisis, India will have to rely more on South-South cooperation, and China is ready to help. The two countries should establish bilateral or multilateral infrastructure funds to attract investment in areas such as energy, traffic, telecommunication and urban construction.

Finally, there is significant scope for bilateral cooperation in the service sector. India has made some substantial upgrades to its service industry, especially in IT, and has carved out a niche for itself in the pharmaceutical industry. China is currently in the process of launching a new program of structural reform, which will focus on further developing its service sector in priority areas such as IT and healthcare. China and India could accomplish much if they worked together to achieve these goals. Both countries have a large pool of high-quality and low-paid engineers and scientists. Both also boost large domestic markets. These advantages could allow China and India to leap-frog over the competition in many high-technology sectors.

Ultimately, more needs to be done to reap the huge potential gains of mutual cooperation between the dragon and elephant. India has to build a more mature manufacturing base, and China has to open up its service sector. But fully fledged cooperation between China and India would place Sino-Indian relations on a new trajectory. That would be a blessing for both Asia and the whole world.

He Fan is Deputy Director at the Institute of World Economics and Politics, Chinese Academy of Social Sciences.