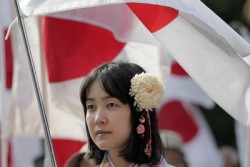 ‘Getting it just right’ with these two powers will require both military and economic readjustments. But it will not be easy given that there are four contending national security strategies for Japan’s relationships with the United States and Japan.

First, ‘autonomists’ prefer that Japan has an independent military capability and technological base — they see no reason to hedge their bets on the rise of China or on the decline of the United States.

Second, some advocate a China-Japan economic condominium and prefer that the country align with the rising power (a ‘bandwagoning’ strategy). They emphasise the benefits of an economic relationship with China, support an East Asian economic bloc, discount the costs of alienating Washington, and welcome the formation of a post-Washington economic consensus and global multipolarity.

Third, some want to ‘balance’ against China’s rising power. If those who bandwagon would hedge by integrating with China economically, those who balance China would hedge militarily, by maintaining a robust alliance with the United States. They prefer that Washington remain dominant, imagine that Japan will be safest when aligned with Washington as the system becomes bi- or multi-polar, and embrace free trade.

Fourth, there are ‘integrators’ or ‘dual hedgers’ who believe that better economic relations with Beijing need not be purchased at the price of diminished relations with Washington. They would use a dual hedge to protect Japan from NAFTA and EU economic predation by integrating with the Chinese economically, and protect from Chinese coercion by maintaining a healthy alliance with the United States.

These viewpoints vie for dominance. For much of the Cold War dual hedgers won out. Led by the pragmatic wing of the Liberal Democratic Party (LDP), they surrendered some degree of foreign policy autonomy and offloaded responsibility for national security to the United States. They emphasised economic growth and technological development that constrained defence spending and limited military deployments.

By the early 1990s, this group was losing ground to ‘military hedgers’ who were anxious about the US commitment, suspicious of Chinese (and Soviet) intentions, and keen to revise the Constitution to loosen constraints on the use of force. They would balance Beijing’s power as fuller allies of Washington, and these LDP revisionists governed during the 2000s.

Yet before they reclaimed power Japan’s national security discourse was dominated for a short time by ‘economic hedgers’ from the Democratic Party of Japan (DPJ). For example, the Hatoyama government reopened base relocation issues and began questioning decisions on the realignment of US forces, putting more space between Japan and the United States than had heretofore seemed possible. Also, the DPJ government began closing the distance between China and Japan on the economic front. But by the time the LDP returned to power in December 2012 the DPJ had backed away from its position. The only group that never achieved power comprised of autonomists, though they were not irrelevant in the fall of the DPJ, the resurrection of the LDP, and the making of national security policy.

Elite opinion on China–Japan strategic discourse has not been aligned with public opinion and misalignment prevents clear mandates. For example, although public perceptions of China have become increasingly negative, preferences about how to deal with China are less clear. Opinion surveys suggest that Japanese are reluctant to embrace a robust military response and tighter alliance with the United States to balance against China’s rise.

Yet the ‘military balancers’ are ascendant. Many, especially those in the new Abe administration, are not convinced that recent experiments in bilateral maritime cooperation provide assurance about China’s intentions but believe that China could evolve into an aggressive sea power.
There is also misalignment of elite and man-in-the-street opinion on the alliance with the United States. Some have welcomed the Obama administration’s rebalancing in the Asia Pacific. But questions persist in Japan’s debate about the long-term American will and ability to provide security assurance as China rises. Autonomists and military balancers both stress self-help security policies that might include nuclear weapons.

Even those who prefer extended deterrence would increase Japan’s defence capabilities in the East China Sea and reinterpret the Constitution to enable a right to collective self-defence, key elements of the Abe national security strategy. Even though national security was not the most salient campaign issue, both autonomists and military hedgers, such as Abe, made gains in the December 2012 election.

When it took power, Japan’s new leadership seemed disinclined to pursue the strategy of getting relations with Beijing and Washington ‘just right’. Yet there was only lukewarm public support for enhanced militarisation of the Sino–Japanese relationship, and even the United States urged caution. Other elites continued to debate — ‘economic hedgers’ and ‘dual hedgers’ in the business community counselled Abe to be prudent.

Consequently, candidate Abe’s tough talk soon turned more pragmatic. He reiterated that the Senkaku/Diaoyu islands were Japanese territory, but also vowed to improve relations with China through dialogue. It soon became less likely that he would follow through on provocative militarisation promises — Abe remained more a military balancer than a dual hedger, but he seemed cognisant of domestic and international constraints.

But as the Upper House elections neared Abe reassessed these constraints. April saw the controversial visit to the Yasukuni Shrine by Japanese politicians and the near retraction of the apology for wartime aggression. To these Beijing and Seoul reacted negatively. And there were reports that Washington privately signalled its displeasure.

In the case of the US–Japan alliance, many problems persist in the alignment of policy and public opinion. Washington privately welcomes the Abe plan to reinterpret the Constitution to allow for collective self-defence, to establish more joint military bases, to enhance SDF amphibious capabilities, and to revise alliance guidelines. But these issues — and the most visible commitment to relocate the Marine Corps Air Station Futenma — have not attracted much public support.

So, public opinion and elite discourse co-exist in Japan’s democratic politics. Each will continue to shift and be buffeted by regional politics. Unless they come into closer alignment, however, we should expect Japan’s unsettled grand strategy to persist beyond the next national election in July 2013, possibly with deleterious consequences for the region as a whole.

Richard Samuels is Ford International Professor of Political Science and Director of the Center for International Studies at MIT.
This is an adapted version of an article published in The Oriental Economist, Vol. 81(5) May