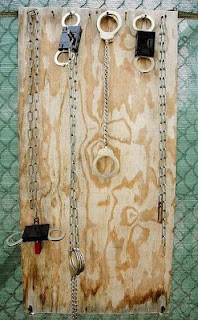 Leg irons and hand cuffs hang on a board at Camp Delta at Guantanamo Naval Base in 2004.

To disperse or concentrate offenders is the dilemma

The vicious killing of an off-duty British soldier in London in May has again thrown radical Islam into the global spotlight.


In response to the attacks, authorities have arrested 10 suspects, some of whom, if convicted, may spend a long time in British prisons. It's a growing trend. There have already been three big terrorism trials in Britain this year, in which 18 people were found guilty and sentenced to a total of 150 years. Realising the extent of violent jihadism in Britain, British Prime Minister David Cameron has set up a taskforce for tackling radicalisation inside prisons, schools and mosques. Australian authorities also continue to make arrests and prosecutions, the most recent being last month when a man was charged for threatening to kill a Commonwealth official.

As the number of convictions for terrorism rises, the problem is how best to manage those offenders in prison. Without concrete evidence, the default practice has been to assign all terrorist offenders to the highest levels of prison security, resulting in expensive, counter-productive and harsh conditions. Just as prisons are referred to as ''schools for crime'', so it is maintained that prisons are schools for terrorists. Worse, it is argued that prisons bring together terrorists with hardened criminals, producing an even greater threat. But instead of hard time hardening the hardliners, prisons may actually reduce radicalism.

In contrast to the view that prisons are ''schools for crime'', prisons can play a positive role in the rehabilitation of a terrorist by reducing adherence to militancy. Prisons can disrupt prior loyalties, allegiances and friendships and connections with terrorist environments by providing respite that can lead to personal change. Inmates cope by creating new relationships and bonds with like-minded prisoners, establishing new patterns of social interaction. Long ago American criminologist Gresham Sykes argued that inmate behaviour stemmed from the pains of imprisonment. Once in prisons inmates are stripped of identity and confined with few supports.

These pains of imprisonment force changes in long-standing attitudes and behaviours. Such social dynamics in the prison have often been underestimated, but the form and duration of incarceration can influence the way terrorist inmates adapt to prison. This begins with physical disengagement and psychological de-radicalisation. Understanding the causes of radicalisation is important too because they play a role in disengagement and eventual de-radicalisation.

The real challenge is to determine whether terrorist inmates should be dispersed among the general prison population or segregated from other inmates. In Australia, the fear that mainstream prisoners will be radicalised by the few terrorists in prison has been a key reason for the national security policy of segregating ''high-risk'' terrorists from other prisoners. In NSW, for example, a handful of terrorists are housed in super-expensive ''supermax'' facilities, which segregate high-risk offenders.

On the flip side, Britain's experience with Irish Republican Army inmates in the 1970s showed that confinement with other IRA inmates ''engendered powerful social pressures'' to conform and remain adherent to militant values. Since then, Britain has preferred the lesser risk of dispersal, allowing terrorist inmates to mix with other offenders, albeit under close supervision.

The jury is still out on what works best. But, the answer may be close to our shores. A continued problem for Australia's national security interests lies with the continuing terrorism threat from our neighbours, Indonesia and the Philippines. Since 2000, at least 300 civilians have been killed in terrorist attacks in Indonesia, and in the Philippines there have been more than 400 fatalities from bomb attacks. In Indonesia, 95 Australians have died in terrorist bombings since 2002.

Kidnapping is a big problem in the Philippines; Australian Warren Rodwell was recently released after 15 months of captivity. A lack of resources, understaffed prisons and inadequate rehabilitation schemes mean that the management of terrorist inmates and the fear of recidivism, or relapsing into past criminal behaviour, is a major concern for the Indonesian and Philippine governments.

The different Indonesian and Philippine prison regimes for terrorists - a mix of dispersal and segregation - offer a rare opportunity to test policies of concentration or distribution of prisoners. What we learn will be useful in shaping prison policy in Australia.

What occurs when radical inmates are incarcerated under different prison regimes that vary their contact with regular inmates or other radical prisoners needs to be a research priority.

Opportunities to undertake research among terrorist inmates are rare, so with the Indonesian and Philippine authorities open to collaboration now is the time act - before we lose the key to an important problem and lock ourselves into an inadequate way of dealing with it.