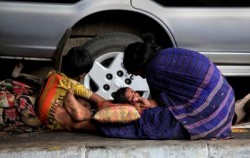 Noam Chomsky once said that ‘reform is a change that you’re supposed to like. So as soon as you hear the word reform, you kind of reach for your wallet and see who’s lifting it’

This statement is all the more true given that economic reform does not mean the same thing across the world. Not all countries choose to take the IMF-driven, Washington Consensus path of economic reform. China’s ‘socialism with Chinese characteristics’ is the clearest example of this.
India’s particular brand of economic reforms can be analogised to a Ponzi scheme. Every year, state-owned enterprises and public assets are privatised in the name of asset reallocation, at throwaway prices. On top of that, every year tax-breaks or subsidies amounting to nearly US$100 billion are handed out to private industries in the name of reform or liberalisation. A small part is then recycled to the citizens in the name of social welfare. This structure is not sustainable, and is bound to fail as the Ponzi schemes in India have been failing.

Regardless of the label one adopts for the reforms, their broad aim is to improve the economic efficiency of the nation. A minority, made up of influential industry lobbyists and journalists in India, have long been sold on the reforms because they have apparently resulted in higher rates of GDP growth in India compared to earlier periods. But this line of reasoning fails to address four key points.

First, correlation does not mean causation. India began to witness higher rates of GDP growth not from 1991 onwards (when the first big economic reforms reportedly began) but during the 1980s. Many commentators have repeatedly pointed out that the high growth rate of near double digits, during parts of the last decade, was more due to global factors, like unparalleled global liquidity, rather than domestic factors; and therefore is not sustainable.

Second, India’s economic growth does not appear to have resulted in employment growth in the formal sector. India has an officially reported unemployment rate of less than 4 per cent, compared to more than 7 per cent for the United States and 4 per cent for China. But in India, 92–96 per cent of employment is made up of employment in poorly paid and low productivity oriented informal sectors. During 1994–2000, organised sector employment grew at 0.53 per cent whereas overall employment grew at 0.98 per cent, both at a much lower level than the increase in the labour force. Recent data from 2004–2005 to 2009–10 period show nearly zero employment elasticity, at 0.01. Most nations chase growth as a means of generating employment, whereas in India, growth has been an end in itself.

Third, in spite of economic growth, there is some evidence that Indians are on an average living on a lower food intake than before, when measured according to calories. Now that India has a sizeable middle class, the situation for poor Indians has surely worsened since the 1990s. The data perhaps reflect a situation where increased per capita consumption at one socio-economic level is resulting in scarcity at the lower level, and thereby reducing the overall national average.

Finally, India’s export competitiveness has fallen. Ad hoc measures, such as cheap resource transfers, liberalisation, export sops, and the creation of Special Economic Zones (themselves a euphemism for land grabs), along with India’s inherent advantages like cheap labour, all have collectively failed to help India gain export competitiveness in a sustainable manner. Exports, as a percentage of imports, have now fallen below the pre-reform days, after showing some early unsustainable momentum up to 2002–3. India’s current account deficit is now worse than that of the US, in terms of per cent of GDP, with the obvious difference being that the US has a strong global currency whereas India has a weak one. Now, India’s current account deficit is worse than its pre-economic reform days, and this, after two decades of reform, cannot be competely blamed on the post-2008 global economic adjustments.

India needs growth. That is not in question. Unfortunately whenever anyone critiques the growth characteristics of India, true believers of the reforms (who Amartya Sen calls ‘growth-maniacs’) demand to hear an alternative. There are and were alternatives, but the present Ponzi reformists have simply been emboldened with too much unsustainable growth too soon. The easy money power, created in the last decade by the global liquidity binge, and the low inflation-environment generated by the Chinese expansion of productivity, have also helped to keep the pro Ponzi-style Indian reform propaganda alive.

India’s constitution, adopted back in 1949, declared India to be a sovereign, secular, democratic and socialist republic. But India’s economic reforms have been divorced from that socialistic mind frame, barring populist measures for election purposes. Howard Zinn, the best-known people’s historian, often stated that socialism should not be viewed as a bad word. India, as a country where 68.8 per cent of people survive on less than $2 a day according to per capita income, cannot ignore economic reform with a socialistic touch. And this can only come when India creates more supply-side capacity, by minimising revenue losses, and by cutting unsustainable subsidies year after year, to both the rich and the poor.Ranjit Goswami is Dean at the Institute of Management Technology (IMT), Nagpur. East Asia Forum