Papuan independence group invited to the next MSG meeting 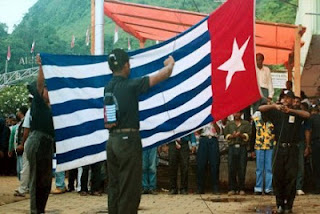 Independence supporters hoist the separatist Morning Star flag at Jayapura in the Indonesian province of Papua. The flag is commonly used by the Free Papua Organisation (OPM). (Credit: ABC)

The West Papuan National Coalition for Liberation has been invited to the upcoming MSG summit in Noumea by New Caledonia's indigenous Kanak political group, the FLNKS (Kanak Socialist Front for National Liberation).

It's the first time they'll attend the Melanesian states gathering as an independent entity.
An application has been lodged to give the coalition full summit membership.

If the application is successful, it will elevate the status of the Indonesian province's campaign for independence.