Challenges to ASEAN as an Indo-Pacific security connector 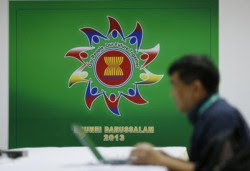 Not only is Southeast Asia pivotal for its close geographical proximity to China, but it also occupies a strategic position connecting the Pacific and Indian Oceans. Southeast Asia could even serve as the geographic centre of the emerging Indo-Pacific system. From an energy security point of view, the Indian Ocean is a crucial transport lane between the Middle East and North Africa’s vast for oil and gas supplies to the center of global growth in the Asia Pacific. As such, regional powers are busily working to increase their influence among the ASEAN countries.

Then Australian Prime Minister Julia Gillard launched the 2013 Defence White Paper in May. Many analysts focused on the paper’s significance for Australia–US–China relations, saying that Australia is now taking a more conciliatory approach to the rise of China. But an often overlooked point of importance is that the White Paper emphasises the significance of Southeast Asia’s stability and peace to Australian strategic posture. While we cannot deny the fact that China is still the key to Australia’s defence strategy, there is certainly a paradigm shift of Australian defence posture that sees a growing importance of Southeast Asia.

India too has expressed a renewed interest in Southeast Asia. For instance, during last year’s ASEAN–India Commemorative Summit India agreed to upgrade the 2003 ASEAN–India Joint Declaration for Cooperation to Combat International Terrorism. India is also investigating the possibility for more bilateral security arrangements with Southeast Asian nations, including through the visit of the Indian Defence Minister A K Antony to Myanmar in January this year.
The United States is also actively approaching Southeast Asia by strengthening its regional military deployments and advancing political and economic relationships.

China, by contrast, is heavily constrained in its intention to advance military cooperation with Southeast Asian due to its disputes with several ASEAN nations over territories in the South China Sea. Nevertheless, China is consistently seeking military-to-military relations in vacuums left by other powers. For instance, China has cooperated with Laos, Myanmar and Thailand to jointly patrol the Mekong River in order to cut down cross-border crime.

In managing security relations with Southeast Asia and in order to shape Indo-Pacific security architecture, regional powers have so far embraced ASEAN-led institutions such as the ASEAN Regional Forum, the East Asia Summit, and the ASEAN Defence Ministers’ Meeting-Plus. ASEAN has been praised for its commitment to multilateralism under which dialogue and confidence building have become core principles, and the ASEAN-led institutions have provided a positive foundation for regional security cooperation. On the other hand, it is unclear whether ASEAN-led institutions will continue to satisfy the interests of non-ASEAN powers as well as protect interests of ASEAN nations in the future.

Beyond the potential for dissatisfaction among non-ASEAN powers, ASEAN member states themselves present an obstacle to sustaining ASEAN’s centrality. There are at least three issues that need to be seriously addressed. First, ASEAN’s credibility to lead the building of an Indo-Pacific region is weakened by disunity among ASEAN members. The diverse and contrasting positions among the ASEAN states means that the political gravitation of security arrangements risks being dominated by the non-ASEAN powers rather than being led by ASEAN.
Second, existing ASEAN institutions have resulted in varying interpretations and approaches toward political-security issues. Specifically, the system of rotating ASEAN’s chairmanship and its secretary-generalship weakens policy consistency and institutional resolve to deal with particular challenges. For instance, in responding to recent conflicts in Myanmar in which many Muslim Rohingya were killed in the last few months little effort was made by the new secretary-general to contribute to conflict resolution. This is in contrast to the previous secretary-general Surin Pitsuwan who proactively warned Naypyidaw about the dangers of ethnic violence, including proposing tripartite talks between ASEAN, the United Nations and Myanmar.

Moreover, current chair Brunei Darussalam has made no initiative to address armed wars between the Malaysian government and loyalists of the Sulu Sultanate in Sabah state. In dealing with security issues, ASEAN is excessively dependent on the initiative of the country occupying the chairmanship or the individual secretary-general, rather than structured and binding procedures.

Third, there is the risk of a security dilemma emerging within ASEAN. Feeling insecure about both other ASEAN countries and non-ASEAN powers’ commitments to security alliances, ASEAN nations have been improving their military capabilities. Indonesia, for instance, plans to buy more than a dozen Sukhoi fighter jets and has already secured a contract for 130 Leopard 2 tanks. At the same time, in 2013, Thailand has allocated 5.7 billion US dollars to national defense, a 7 per cent increase from the previous year. As such there is an urgent need for ASEAN to mitigate the risk of a regional arms race.

In a recent speech in Washington, Indonesian Foreign Minister Marty Natalegawa proposed the idea of an ‘Indo-Pacific Treaty of Friendship and Cooperation’ in order to advance trust and communication in the region. This is a timely idea as all nations in the Indo-Pacific region heavily need to build further trust in order to foster a sustainable regional peace and stability. Still, it will be a great challenge given the wide geographical scope and the increasingly fluid, unpredictable and complex nature of geopolitical rivalries among nations today. In this current age of uncertain geopolitical change, if ASEAN is to maintain its centrality to the regional cooperation and building process and avoid becoming the object of great power competition, ASEAN member states must find a way to act more cohesively and effectively.

Awidya Santikajaya is a PhD candidate at the Asia Pacific College of Diplomacy, College of Asia and the Pacific, the Australian National University.
This piece was originally published in The Jakarta Post.