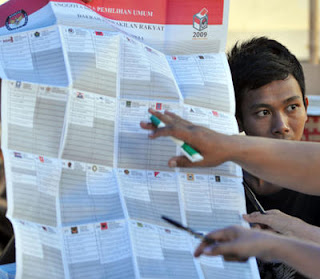 Earlier this year in April, Indonesian political parties submitted their lists of legislative candidates for the 2014 General Election.

Among the candidates are 10 current Cabinet Ministers,15 relatives of President Susilo Bambang Yudhoyono, the wives of two ministers, and 51 celebrities, including models, singers and TV-personalities. The lists strengthen the impression that Indonesia’s politics is dominated by political dynasties, fame and money, rather than capability, experience and merit.

There are three reasons for this phenomenon: weak implementation of the rule of law; ‘idol syndrome’ or personalistic voting behaviour; and weak party institutionalisation.

First, Indonesian electoral law is always changing from one election to the next based on the interests of politicians. That is one of the reasons why after 15 years of Reformasi, Indonesia is still consolidating its democracy. More importantly, weak rule-of-law implementation enables politicians to exploit loopholes for their political interests.

Second, the changing voting behaviour of the Indonesian electorate from being Aliran-based — where the ideology and party platforms were important — to following a more personality-based model has also contributed to the problem. This so-called ‘idol syndrome’ is why celebrities, TV personalities and members of political dynasties have a bigger chance of being elected. They enjoy a high level of popularity and are more visible in the media.

Third, the core problem lies with Indonesia’s political parties. Most parties are catchall parties whose main priorities are to win elections and fund party operations, rather than to establish fair and open selection and promotion mechanisms.

One possible upside of this growing trend toward personality politics is that it may increase female representation in politics. Populism is seen as a way of enabling political parties to fill the quota of 30 per cent women candidates that is required under electoral law. In raw numbers, the rise of celebrity and family-network politics has certainly increased the proportion of women in parliament. After the 2009 election, women made up around 18 per cent of all members of parliament. The same election also resulted in the election of the highest ever number of celebrity parliamentarians. Currently, females make up 23 out of 51 celebrity candidates (45 per cent), and 5 out of 15 candidates that are said to be related to President Yudhoyono (33 per cent).

But filling the gender quota with celebrity candidates and the family members of political incumbents does not guarantee that the female legislators will support women’s issues such as gender-sensitive budgeting, violence against women, maternal health support, or the specific issues faced by female migrant workers. Of course, this is an oversimplification. There are some female legislators who really do fight for women’s rights in the parliament. Nevertheless, it is also safe to say that if political parties do not implement proper selection and promotion mechanisms, Indonesia might see another Angelina Sondakh, a Democratic Party legislator who was involved in a corruption scandal, or Ratu Munawaroh, wife of the governor of Jambi, who was replaced because she never attended a single meeting of parliament.

In view of these problems, political parties should not simply resort to short-term solutions to retain their power. Instead they should be more long-term oriented and positively contribute to consolidating Indonesia’s democracy. Political parties should scout for members and provide them with adequate training, instead of picking popular personalities that have no demonstrated track record of competence or commitment to their parties. Failing to do so will degrade the quality of Indonesia’s parliament, which will increasingly be composed of good media personalities who are inefficient legislators.

One way for political parties to find better candidates is to open their recruitment to the public and be transparent in the selection process. By the same token, parties should publish the background of their candidates so that the public can choose their future legislators based on their capabilities and track records. This would also restore the image of political parties as a voice for the people.
Finally, Indonesia must strengthen and improve the quality of the Indonesian National Electoral Commission and other related institutions in implementing electoral law, and avoid politicising such institutions. The media and civil society must also play an important role in monitoring political parties and election management bodies. Only then will Indonesia be able to increase international confidence in itself as a country that values what people know, rather than who they know.