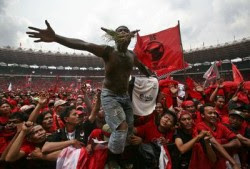 In the lead up to the incumbent Democratic Party’s national convention in September this year and the Indonesian presidential election next year, a number of prominent political figures are jostling to be selected as the party’s presidential candidate.

Many of these potential candidates are external figures rather than inner-party elites. Such external figures include Mahfud MD, a former Constitutional Court Chief Justice; Gita Wiryawan, a former businessman and Minister of Trade since October 2011; Dahlan Iskan, former CEO of the Jawa Pos Group and Indonesia’s State Electricity Company, and Minister of State Enterprises since October 2011; Irman Gusman, current chairman of the Regional Representatives Council; Pramono Edhie Wibowo, former Army Chief of Staff and Jusuf Kalla, former vice president during President Susilo Bambang Yudhoyono’s (SBY) first term (2004-2009) and presidential candidate for the Golkar Party in 2009. By contrast there are few internal figures among the frontrunners other than Marzuki Alie, Speaker of Indonesian House of Representatives and former Democratic Party Secretary-General. The opportunity of these external or ‘floating’ elites to run as a presidential candidate for the incumbent party carries with it some potential significant effects for Indonesian politics.

In political science the term ‘floating elite’ describes elites without a party base for attaining power in office. Nevertheless, as Robert Michels argues in Iron Law of Oligarchy, through power resources — such as finances, popularity, and mobilisation capability — these elites display the ability to mobilise grassroots level support and compete in elections. As such, the internal party elites may allow the floating elites to run in order to achieve a majority come election time. This process is particularly likely when a party’s image is suffering decline as is currently the case with Indonesia’s Democratic Party.

Many eminent Democratic Party figures, including Nazarudin, Angelina Sondakh, Andi Malarangeng, and even the former party chief Anas Urbaningrum, have been involved in corruption scandals during SBY’s second term. But, as is typical with newly established parties, there appears to be no strong plan for managing the crisis. SBY himself has been compelled to take the lead to clean up the pervasive corruption within the party. And in replacing Urbaningrum’s position, the Democratic Party chose SBY illustrating that there is no strong organisational structure within the party, beyond SBY and his inner circle, to lead the party.
The corruption scandals within the party and reliance on a single political leader are the main reasons why the party is losing public support. This view is shown the latest survey by the Centre for Security and International Studies, Jakarta, which shows that the Democratic Party’s public support rate has declined to a new low of 7.1 per cent. This is a dramatic fall compared with their 21 per cent support rate in 2009 when SBY was voted in for a second term.

Given the Democratic Party’s current situation, one potential rescue plan is to establish an open primary convention from which both internal cadres and external figures can compete to be nominated as the Democratic presidential candidate in the 2014 election.

Mahfud MD is presumed to be the most prominent figure who can help the ruling party lift its reputation due to his unblemished personal background and his record of integrity as a former minister and constitutional judge. With the split in his former party, the National Awakening Party (PKB), Mahfud’s only realistic opportunity to enter the race is through the Democratic primary convention. However, winning the primary will be a tough ask not only due to competition from other external figures but also because of the lack of support from inner-party cadres.

Among the internal candidates, Marzuki Alie is the most eminent figure based on his career in the party. But his reputation as an elite means he lacks a basic grassroots constituency. Alie’s challenge is exacerbated by a split between the cadres into two camps: those loyal to former chief Urbaningrum and those loyal to SBY. In sum, the Democratic Party faces many obstacles in elevating its popularity before the upcoming election.

Amidst the patrimonial based system under which Indonesian political parties operate, the emergence of external figures may help facilitate a transition to a more robust political landscape as Indonesia seeks to consolidate its democracy. After the ouster of President Soeharto in 1998, Indonesian politics has been controlled by a dominant closed-party system under which only established party elites can lead, maintain, and, more importantly, decide who can run in legislative and presidential elections. From 1999 until 2009, these elites have tended to maintain their roles or have created new political parties to acquire government office. Only the Golkar Party bothered to hold conventions in 2004 and 2009, and its choice of candidates was still dominated by internal elites.

The emergence of the external figures reveals the opportunity for outsiders to compete in the internal party conventions leading to the presidential election. Even though these floating elites face a lack of internal support, particularly from the cadres, they nonetheless exemplify an opportunity to fortify the quality of democracy in Indonesia, allowing external elites to express their various political visions and draw support from the grassroots. This will be crucial for the future of Indonesian politics as consolidating democracy requires not only the maintenance and strengthening of a free and fair electoral system, but also open public discussion of alternative policy visions and their impact on the public interest.

Hipolitus Yolisandry Ringgi Wangge is Visiting Scholar in the Equality Development and Globalization Studies Program at the Buffet Center for International and Comparative Studies, Northwestern University.