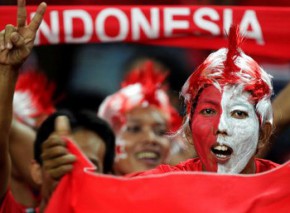 Despite the recent and long-awaited merger of Indonesia's warring football leagues into a single governing body, foreign players remain unpaid and as vulnerable to exploitation as other migrant workers.

With Indonesian football in a perpetual mess due to high-level political infighting and competing governing bodies, both local and foreign players have gone unpaid, some for up to nine months, losing outstanding bonuses, and foreigners often playing without visas.

For the past two years, most foreign players have worked without a kitas (working visa), leaving them afraid to take legal action against clubs or the governing Indonesian Football Association, known by its Indonesian language initials PSSI.

In fact, due to the lack of a work visa, some are unable to leave the country, obliged to continue working for clubs without pay as they fear detention or deportation.

This is occurring in a country that is absolutely mad for football despite being endlessly frustrated. The biggest country in Southeast Asia, it has been a traditional doormat, drubbed in its quadrennial pursuit of the FIFA World Cup. The team has been eliminated at the start of every World Cup round since 1974 and cannot even win regional cup competitions against smaller neighbors.

Players, both domestic and foreign, also are at risk of physical violence from frustrated fans. Unruly supporters regularly attack visiting teams, sometimes invading the field and player changing rooms, lighting fires in stadiums, or breaking bus windows with players inside. Several supporters die each year during fights with rivals.

In a televised report about abuse of Indonesian football players, Frederique Winia, secretary general of the Asia division of FIFPro, the worldwide soccer union, called the situation a "disgrace for the whole of professional football in Indonesia."

Last season, the immigration department denied visas to foreign players and coaches of the Indonesian Super league (ISL), which is considered a breakaway league. This in spite of the fact that whether or not the league was officially recognized by FIFA, the sport's governing body, clubs still have a right to employ foreign players within a legal football business.

On the other hand, many players in the Indonesian Premier League (IPL), which is "official," were also denied work visas. The two leagues have been feuding for several years.

Robbie Gaspar, a former Australian player in Indonesia, is representing a group of 12 Australians who are owed money by Indonesian clubs. He suggested that the reason immigration didn't give visas to some players in the official league may have been because the IPL was run in an amateur way and immigration officials were aware of problems with salaries.

Others blame politics. The rivalry between the ISL, which is affiliated with Golkar, Indonesia's biggest political party, and the IPL, which is backed by the ruling Democratic Party, resulted in attempts to discredit the unofficial league. The dispute goes back to a battle for control of national football.

The ruling national body, PSSI, was in charge of the IPL, and the KPSI (Indonesian Soccer Rescue Committee) is in charge of the ISL. The breakaway league and committee were formed after Golkar's chairman, coal baron Aburizal Bakrie, lost the battle to maintain control of the PSSI.

PSSI and KPSI dodged every deadline FIFA granted over several years before finally agreeing to an uneasy merger in March of this year after FIFA threatened sanctions including a ban on Indonesia playing in international matches. New PSSI chairman Djofar Arifin Hussin is aligned with Bakrie.

With fan attendance rivaling that of the German and English pro leagues, football here is a treasure trove of votes and money, which explains the interest of President Susilo Bambang Yudhoyono's Democratic Party and Bakrie's Golkar.

The Ministry of Sports took control of PSSI in 2010, which prompted Bakrie to set up the rival ISL. Tensions soared. Amid sponsor withdrawals, the government ceased state funding and some clubs shut down. Some clubs were allegedly using their funds for political campaign activities instead of paying their debts.

While the big men were doing battle, players and coaches suffered, both local and foreign. Some who had overstayed were stuck in the country, waiting until the leagues sorted out their differences and they could get their visas and try to recover their salaries. Others couldn't afford to buy tickets home or were scared to leave knowing that they would never get paid.

Last season, instead of just paying late, the majority of clubs didn't pay months' worth of salaries at all. There was no recourse for aggrieved players who were working illegally and overstaying on tourist visas, effectively trapped with breached contracts.

In the midst of the deadlock between the leagues, two high profile ISL players were hauled into immigration and detained for questioning. One was released with a blue stamp in his passport, a level two deportation, which is a warning that requires the passport holder to leave the country.

The other player's team allegedly paid for a quick resolution to the problem.

The Indonesian Professional Footballers Union (APPI) has been recording player's complaints and compiled a list of 13 clubs who owe money, yet their biggest concern is that players are afraid to stand up for themselves and take legal action or to strike.

APPI General Manager Valentino Simanjuntak told FIFPro that the number of deadbeat clubs is probably higher because players don't dare to speak up.

"Many players are afraid and confused. Most of the players are under the influence of their clubs, who put a lot of pressure on them to wait for their payments," he said. "They are afraid that they will be sanctioned by their club if they take action. Besides, both leagues are trying to prevent players from communicating with APPI. As a consequence, the players lack solidarity in the fight for their rights."

Gaspar is owed 17 months' pay after only being paid five months of a terminated two year contract with Persema Malang, for which he played one year.

"My case is at FIFA. I played two seasons in Indonesia without a kitas" he said. Like many other players he was repeatedly promised a visa and told to wait.

Gaspar has sought help from numerous organizations for the past year, but feels like he is hitting a brick wall.

"I tried to come to some sort of agreement that was fair to both parties but they only wanted to give me two months and I was already owed five by then," he told Asia Sentinel. "They play hardball with the players. They know the players need money and they are desperate so they just wait and wait and wait and then offer them a small amount. They players have to take it because they need the cash."

According to a report in the London Times, the money owed to players by Indonesian clubs is around US$6.2 million.

Gaspar said only two of the 12 unpaid Australian players are still playing in Indonesia.

Jamie Coyne signed on for a half season in round two last year for Sriwijaya FC, and half of his six month contract remains outstanding.

Sriwijaya FC were the ISL league champions that year. After playing out his contract with the winning team, and then receiving such a blow, Coyne had no choice but to reject offers from clubs for the next season, unwilling to risk what he learned was standard treatment from professional Indonesian clubs.

"I didn't come back to play in Indonesia because of the fact that Sriwijaya FC didn't pay all of my contract. When a club that you win the championship with can't pay what you have signed and agreed on, it doesn't leave a good impression" he said. Asia Sentinel