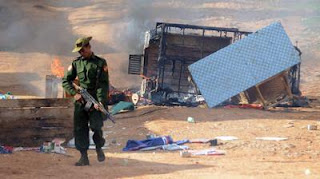 Under the transition process led by President U Thein Sein, the Myanmar government is seeking to simultaneously pursue complex economic and political reforms as well as resolve ethnic conflicts and achieve national reconciliation. These challenges are intrinsically related — reforms will pave the way for reconciliation but increased violent conflict has emerged as a key threat to continued reform. To add to the complexity, Myanmar simultaneously faces three distinct types of conflict — ethnic armed groups, violent opposition to resource exploitation and communal violence — all of which are related to extractive industries.

Before the recent political and economic transition, Myanmar was isolated and poor, burdened by chronic mismanagement during five decades of military led governments. The country’s development was held back by a confusing multiple exchange rate regime, an unstable regulatory environment for business, stifling restrictions on agricultural production, and bursts of high inflation as the Central Bank of Myanmar monetised the budget deficit by printing money.
The military governments fought long running wars against ethnic armed groups struggling for self-determination and independence. These conflicts inflicted a heavy toll, both in terms of casualties and the creation of large refugee populations. The armed conflicts have held back development in ethnic minority areas.

Myanmar is heavily dependent on natural resources and for decades the military governments exploited natural resources with almost complete disregard of the socio-economic impact on the local population. Concessions were granted to unethical international partners to extract timber, jade and mineral resources without even basic transparency of earnings. Due to this poor record, the Revenue Watch Institute ranked Myanmar as having the worst resource governance among 58 countries studied.

Resource rich ethnic states have been targeted for predatory resource extraction, which has served to perpetuate the animosity towards successive military governments. While the latest 2010 estimate puts the national poverty headcount at 26 per cent, rates are far higher among many of the minority groups. It is noteworthy that three out of the four poorest areas are ethnic minority states. The incidence of poverty in Chin State alone is almost three times the national average. This suggests a vicious cycle whereby conflict holds back development and under-development in itself feeds a sense of relative deprivation.

Progress has been made as the Government of Myanmar earlier forged cease-fire agreement with 11 of the 12 ethnic armed groups, and recent talks between the government and the Kachin Independence Organisation has raised hopes for a political settlement of the civil war in Kachin State. The main challenge in resolving the armed ethnic conflicts lies in agreeing on permanent political settlements. Economic reforms and inclusive development in post-conflict areas will be key to bringing about and long-term stability. Long-term stability in Kachin State will ultimately rely on introducing more responsible management of natural resources in the area, including hydropower.

Fostering national reconciliation will require creating a more balanced relationship between the central government and the ethnic minority states. Institutionalising revenue sharing as well as sharing of political power will allow space for increased self-determination for the recognised ethnic groups and undermine support for armed struggle. Peace building hinges on the implementation of power and fiscal sharing with the ethnic communities and ceasefire groups. The establishment of sub-national governments under the 2008 constitution is a critical first step towards effective decentralisation and more inclusive development.

The heavy-handed extraction that contributed to the ethnic armed struggles has more recently sparked an increase in community level resistance. Protests against mining and dam projects often turn violent as protesters face security agencies and private developers with little regard for the rights of locals. President Thein Sein’s government has already faced two major confrontations with local populations protesting against resource projects: the Myintsone dam project in Kachin State and the Lapadaung copper mine in Sagaing Region. Ending violent confrontations with groups protesting against extractive industries will require improved natural resource management and strengthened protection of land ownership rights. Merely focusing on establishing the rule of law is an inadequate solution as laws inherited from the military governments put grassroots protesters at an disadvantage. Current developments are encouraging, as the country’s commitment to the Extractive Industry Transparency Initiative (EITI) will provide a safeguard against reckless development.

An alarming trend is the increase in a third category of violent conflicts in Myanmar — the outbreaks of communal violence in Rakhine and increasingly in other areas across the country. A complex mix of economic, ethno-religious and historical motives drives this violence. Existing tensions between groups easily spark violence when there is fierce competition over land and other scarce resources. The confrontations between Buddhists and Muslims possibly pose the largest risk of undermining the reform process, as communal tensions threatening social stability are inherently difficult to solve with negotiated settlements given the lack of organized leaders. The Myanmar government is ill prepared to handle fragile ethnic and religious relations and struggles to identify appropriate policies to lower tensions. To end communal violence the government will have to end discriminatory practices, such as the ban on having more than two children imposed on Rohingya families in Rakhine State, and actively seek to broker improved communal interactions between different ethnic groups.

While there have been encouraging developments in finding negotiated settlements to the long-running ethnic armed struggles against the central government, the increasing frequency of communal violence and violent resistance against natural resource extraction is clearly alarming. Given the complex links between natural resources, conflict and poverty, these issues need to be proactively and jointly addressed. Policies for conflict resolution must recognise the inherent differences of the causes and mechanisms of the different categories of violent conflict; there is not a single solution that can be applied to solving all of Myanmar’s conflicts.

Economic reforms and political settlements will serve to mitigate violence in Myanmar as long as policies are adapted to the character of the country’s multiple conflicts. Institutionalised revenue sharing and the decentralisation of power is the appropriate policy for permanently settling the long running ethnic armed struggles. Communal violence must be stopped with improved inter-group relations and inclusive economic development policies, and resistance against resource extraction is best prevented through strengthened local ownership of resource management.

Anders Engvall is a Research Fellow at the Stockholm School of Economics.
Soe Nandar Linn is a Research Associate at the Myanmar Development Resource Institute’s Centre for Economic and Social Development.