In Malaysia - Time on whose side? 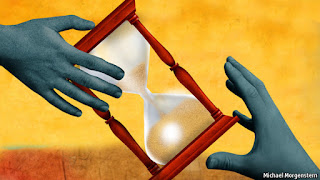 Angry at an unjust defeat, Malaysia’s opposition has reasons to be hopeful

IN JAIL, Anwar Ibrahim read a lot of Shakespeare. To understand Malaysian politics, the opposition leader says, you have to know Macbeth, a tragedy of overweening political ambition. For the government, the ambition defacing the country’s politics is that of Mr Anwar himself, to become Malaysia’s prime minister. He had promised to retire if he lost the general election held on May 5th. “But we won,” he says.

That is not how the government sees it. Though the opposition coalition which Mr Anwar leads, Pakatan Rakyat, got 51% of the votes, it won only 40% of the seats in parliament. Years of gerrymandering favour the Barisan Nasional coalition that has ruled Malaysia since independence in 1957. Mr Anwar also alleges outright electoral fraud. He has been leading protest rallies around the country against the “theft” of the election.


In his Sisyphean struggle to reach the peak of Malaysian politics, he has come close before. In the 1990s he was deputy prime minister and prospective leader of the government he was to turn against. For a moment in 1998 it seemed as if a people-power movement might sweep him to office. Instead, he spent six years in jail on charges of sodomy (later overturned). After the previous election, in 2008, he again seemed on the brink, claiming enough members of parliament were ready to defect from the government to give Pakatan a majority. It came to naught.

So, most likely, will his current campaign. Pakatan is to file petitions challenging the result in as many as 31 of the 222 constituencies. But this drawn-out process is not likely to overturn the result, and neither is a lawsuit against the election commission—for allegedly defrauding the nation by marking voters’ fingers with “indelible” ink that soon rubbed off. The rallies’ purpose, admits a leader of Parti Islam Se-Malaysia (PAS), one of Pakatan’s three components, is “to keep the torch alight”. That is helped by anger at the arrest of three opposition leaders and a student activist under a sedition law the government had promised to repeal, and by raids on opposition newspapers.

No opposition leader wants the torch to light a conflagration on the streets in the hope of toppling the government in a Malaysian spring. Yet Mr Anwar argues that the rallies must continue nonetheless: “If we don’t force them to change now,” he says of the ruling coalition, “they will never change.”

For all that, it seems likely that the protests will eventually peter out and that Pakatan will have to knuckle down to another stint in opposition. Whether the next election will be fairer is another matter. Two of the biggest injustices are unlikely to go. The media, except online, are slavishly pro-government. Constituency boundaries are to be redrawn this year. But the opposition trusts neither the election commission, which will propose changes, nor the government, which will approve them.

Pakatan suffers friction among its disparate members—the Islamic, ethnic-Malay PAS, Mr Anwar’s multiracial Keadilan and the Democratic Action Party (DAP), whose support comes mainly from the ethnic-Chinese minority, about a quarter of the population. Barisan, a coalition dominated by the United Malays National Organisation (UMNO), may try to split Pakatan, by tempting the DAP or PAS, or both, into the government.

Mr Anwar says that, since the election, Barisan has already been trying to woo him. It has also emerged that, before an election he expected to win, he signed a secret agreement with his nemesis, the UMNO leader and prime minister, Najib Razak. Under the deal, brokered by Jusuf Kalla, a former vice-president of Indonesia and an old friend of both men, they promised that they would eschew personal mudslinging during the campaign, that the loser would accept the outcome, and that the winner would govern in a spirit of “national reconciliation”. Mr Anwar excised another clause promising a government of national unity. He says that he feared UMNO would not willingly give up power. Mr Anwar says the agreement was invalidated by government cheating at the polls. As it happens, Mr Najib never physically signed the deal, saying he needed to consult his coalition. But he did at least mention “national reconciliation” in his victory speech.

Reconciliation seems distant. And Mr Najib’s problems may be even bigger than the opposition’s. Unusually for a victorious incumbent, he argues for a change in “our attitude, strategy, programmes and approach”. A radical idea has been floated: turning the Barisan coalition, whose Chinese and Indian bits took a hammering at the election, into a proper, multi-ethnic party. And to show that he means to deal with corruption—the biggest reason for Barisan’s waning popularity—Mr Najib has appointed to his cabinet Paul Low, a former head of the Malaysian arm of Transparency International, an anti-corruption watchdog. Mr Low says his job requires “changing the system”. The system will resist.

Mr Najib has his job by dint of his leadership of UMNO. He comes up for re-election at a party congress later this year. His predecessor as prime minister and party leader was ousted by colleagues. By contrast, Mr Najib, more popular than his party, may survive. “I think the party will support him because of a lack of an alternative,” is the ringing endorsement from Mahathir Mohamad, who once dominated Malaysian politics. But UMNO hardliners may make reform difficult. Having lost the Chinese vote, for example, they may oppose further erosion of affirmative-action policies favouring ethnic Malays.

The opposition, meanwhile, is confident. Barisan is also losing the votes of growing numbers of city-dwellers and of the young. Pakatan has the momentum. Mr Anwar, however, is 65. With no obvious successor, he seems in a hurry. Lim Guan Eng, the DAP’s leader, is upbeat about the opposition’s hopes: “The future is not theirs; it’s ours.” But it is not necessarily Mr Anwar’s.
Economist.com/blogs/banyan