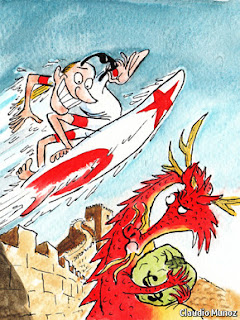 BANKS do not keep their doors open an extra half-hour just because their customers need more money. But when the banks themselves are short of cash, things are different. On June 19th China’s interbank market stayed open late as banks scrambled to borrow funds from each other. On June 20th the seven-day repo interest rate shot up to 12%, the highest on record (see chart).

The Shanghai interbank offered rate (SHIBOR), an average of the rate at which big banks say they will lend, also rose.

In a more mature economy such a spike would be “very scary”, notes Tao Wang of UBS. In such economies central banks set the interest rate at which they will provide funds to banks. If they keep this policy rate steady, then interbank rates can surge only if banks start to doubt each other’s creditworthiness.

In China the central bank’s provision of liquidity is more ad hoc. As a consequence “short-lived cash crunches” are not unusual, says Mark Williams of Capital Economics. This crunch began innocuously enough. Deposits were drained by companies paying taxes and customers withdrawing money in advance of the Dragon Boat holiday on June 10th-12th. A crackdown on illicit capital inflows hit another source of liquidity.

The surprise was that the central bank then did little to ease the strain. Instead of printing money and buying stuff, it decided to sell three-month bills on June 18th, withdrawing money from circulation. The amount was tiny. But the signal was clear: no help could be expected from the People’s Bank of China (PBOC). Banks with money to spare chose to hoard their funds, worsening the crunch for others.

Why was the PBOC so hard-nosed? It sets an explicit target for money-supply growth and an implicit target for credit growth. These targets are supposed to be consistent with each other and with economic stability. From its point of view, if banks find themselves short of money they must have provided too much credit. That may well be the case. Although straightforward bank loans are under control, banks have simply invented new ways of lending.

That is regrettable. But it seems odd to use monetary policy to punish banks for behaviour that the regulator should have prevented. With luck the banks will now slow their lending and conserve their cash, at least until they pass quarter-end regulatory reviews. Some banks, however, may flirt with default. A cash crunch is a terribly clumsy way to curb credit growth. In a more mature economy, a central bank could assert itself in clear, calibrated steps by raising its policy rate. In China the PBOC has instead drawn a line in the shifting sands of credit and waited for banks to discover it. The Economist