Alienation and Ethnocide in Burma 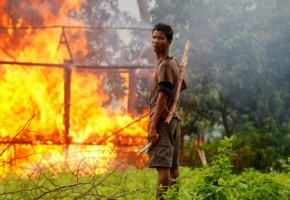 The ominous political debate over ethnicity

Last year, I accompanied an ethnic Shan-Danu Muslim teenager to an immigration office in Burma's Shan State to inquire about the citizenship application she had submitted through her high school. Although her friends had received their cards, the girl was told to come to the immigration office.

When she inquired about the reason for her visit, she was asked: "Are you of mixed blood?" The girl didn't understand the question. The official asked again, "Are you Chinese?" The girl looks somewhat Chinese. Her father is ethnic Danu and her mother is an ethnic Shan. They both are citizens, as are their parents.

She replied: "I am Muslim."

The officer responded in an impatient tone: "Yes, that's mixed blood," adding that was why she needed to come to the office.

But "mixed blood" doesn't refer to her or her parents' ethnicities, but to her religion. It appears to be the default category for Muslims, an automatic synonym for both South Asians and Chinese. All of her hyphenated 'native' ethnic identities, however socially conceived and defined, matter less than her religion.

Designating her a "mixed blood" cost her money of course. A junior officer charged her 7,000 kyat (about US$8) to file her application. His sole act was to put her documents into a cheap, old paper folder.

The girl's case is emblematic of the growing political debate over the status of Burma's Muslim communities. It is enormously tangled, and is used to further increasingly ominous jingoism against anyone presumed to be non-Burmese - and there are legions of the disenfranchised.

Although Muslims, mostly Sunnis, make up only about 4 percent of the population according to the latest government census, and as much as 6-10 percent, according to the country's Islamic scholars, they have in recent months been demonized by leaders of the 89 percent majority who describe themselves as Theravada Buddhists. The majority population, reportedly egged on by a military that wants to keep its hand in running the government from behind the scenes, repeats that Bengalis are terrorists and troublemakers who foment violence and that therefore they and their religion must be suppressed. The majority do not seem to accept that the violence must stop immediately, and that political dialogue is needed to clear misunderstandings and problems.

The political effect of self-victimization is that it lends support to an anti-Muslim campaign that is already manifested in large-scale violence.

The country's 1982 Citizenship Act is being used against those not recognized as official "national races" to prove that their forefathers lived in the Burmese territory prior to 1823 - one year before the first Anglo-Burmese war 190 years ago.

That is odd as at that time there was no Burma as we know it today. Moreover, today's "official" categorization of 135 ethnic groups is at odds with the history of categorization itself. For example, a 1960 publication by the Ministry of Culture estimated ethnic groups to be about 50, but the manual from the Department of Immigration and Manpower published in 1971 listed 144 so-called national races.

There, Muslims and South Asian groups were listed in an alphabet soup of designations such as Rakhine-Chittagong, Burmese Muslims, Rakhine-Kaman, and Other Burmese-Indians. The updated list of the 1990s, which the government never released officially, included only 135 groups. All Muslims and South-Asian -related groups were removed. U Ko Ni, a Supreme Court lawyer, writes in Pyithu Khit (People's Era) Journal that contradictions in the Citizenship Act and Burma's three constitutions create a mélange of citizens of ethnic parents, naturalized citizens, guest citizens, people whose status is doubtful, those who have the right to be naturalized citizens, citizens with the right to run in elections and citizens without the right to run in elections.

Apart from legislative flaws, legal implications and political or electoral discrimination, the experience of Muslims in Burma sheds light on the way they are made citizens and foreigners simultaneously.

First, the name of the card that identifies one's citizenship status is called a "Citizen Scrutiny Card." The use of the term "scrutiny" is a reflection of the surveillance state. It is not only to scrutinize citizens as individuals but also to limit the rights of certain people in the name of protecting race and religion.

At immigration offices, as with the girl I accompanied, the phrase "mixed blood" is frequently used. It is not something to be ashamed of in this 21st century socio-political order. Immigration minister Khin Yi recently said citizenship in Burma is determined by bloodline.

What is equally striking, however, is the way Muslims are identified on their cards - Race/Religion for a university student whose father is ethnic Danu and mother ethnic Innthar, is identified as "India Burman Danu Innthar Islam" - without punctuation. This happens because every Muslim is required to identify on his or her card either as being from India, Pakistan or Bengali.

There are only "India" or "Pakistan" as countries but not race, if there is anything called race at all. Although there is no clarification over whether the use of these words is to refer to either nationality or citizenship, or ethnicity, using them for the category of Race/Religion appears imprudent.

The case of the student's mother is also intriguing. The mother, who is ethnic Innthar, was identified as "Bengali" although she is not even ethnically related to a Bengali. When immigration authorities began issuing the current Citizen Scrutiny Card in 1989, the mother's father in a small village in the Innlay Lake region was told he must register as a Bengali on his card. Not knowing the implications, the old man said "It doesn't matter. If you want to write, just write it." The ethnic Innthar man thus became a Bengali.

As a result, his daughter was also issued the card on which she was classified as Bengali. Having realized that being identified as a "Bengali" on the card was troublesome, the woman took an oath at the township court that she was not Bengali but Innthar. Although the township immigration officer didn't change her ethnic status after the oath, the woman's argument won at last. Her Bengali status was successfully stripped off. She un-became Bengali.

In another family in Taunggyi, the multicultural capital of Shan State, a child is identified as "India + Burmese + Islam," and another as "Pakistan + Shan + Burmese + Islam" despite the fact that they are in the same natural family unit. This doesn't seem to matter to the government.

Such is the creation of "aliens" who have lived in Taunggyi for four generations. They are not migrants, and yet legal categorization has made them foreigners from South Asia– known as kalar. The striking matter in the first two cases is that the grandchildren of once relatively well-known figureheads of the town have been designated foreigners or outsiders by ethnic Burmans who only recently came to Shan State on government duty - to scrutinize who are and are not proper members of the town and the country - strangers coming to town only to tell the native families that they are outsiders.

In addition to turning in-country born Muslims into foreigners, official ethnocide is going on. A good example is that of ethnic Pathi, a Muslim majority people in central Burma whose recorded history and recognized status go back to the Burmese dynasty era. Although referred to in general terms as "Burmese Muslims" since the mid-1900s, Pathi as an ethnic category has faded away. Members of the community only continue to use Pathi as a prefix to their names.

In 2012, a political party was barred from registering a party with the name "Pathi." Similarly, members of the community no longer register as Pathi on citizenship cards. In another case, a Mandalay woman of my acquaintance has been newly registered as "India Burmese + India Burmese/Islam." Her old card, which was issued when she was 10, identified her by "national race" as Pathi and Islam for the religion category. But when she was required to update the card as she turned 18, the immigration department denied issuing her the card with Pathi as a national race. She did not renew her card for more than 12 years, at which point she found herself holding a card that identifies her as "India Burmese" although it was not her decision to accept her new legal identity.

Religion is a major determinant of this system of alienation. For instance, a man in Mandalay has India on his card, but his brother who chooses to follow his mother's Buddhist religion does not.

Dislike of Muslims and discrimination is not new in Burma, however. It is a decades-old. But the latest round of anti-Muslim hate campaigns, animated by the 969 movement, has had a serious impact on Buddhist-Muslim relations.

Striking discrimination in my recent research in Shan State is that of primary school teachers against children. This seems new. Some Muslim parents are saddened that teachers called their kids kalar (Indian/Muslim boys) or kalar ma (Indian/Muslim girls). At one school in Taunggyi, a third-grade Muslim girl was not allowed to participate in a staged activity due to her "kalar" look, discouraging her from going to school at all.

Teachers do not seem to be teaching respect and tolerance either. A grade one student, for example, was is not befriended by other kids due to her kalar look, especially the "merging of the eyebrows." The list goes on.

With the anti-Muslim 969 movement, Muslims are increasingly facing discrimination in the employment sector as well. In the past, Muslims were not recruited by the military or civil service. Now employers, in both family businesses and companies, are less willing to hire Muslims. A recent university graduate applied for job at a Bank in Taunggyi but was told clearly that the Bank did not hire her kind.

Not all Burmese or Buddhists hate Muslims, however. There are monks, educators, activists and ordinary citizens who are frustrated with the spread of hate campaigns across the country. But their benign attitude and voices are far less powerful and felt than that of a state that has designed alienation politically and structurally, and that of majority Burmese and/or Buddhists who have internalized and unleashed anti-Muslim sentiment and actions.

While the restrictive citizenship act makes the Muslims second class citizens, the discrimination they face results not only from the matter of law (i.e. the lack of citizenship), but also from alienation - particularly the practice of outright denial which has much do with racism and ignorance. Discrimination against Muslims is based on their socio-cultural or ethno-religious membership as much as on legal status.

Therefore, while addressing the 1982 citizenship act is a must, it is important not to lose sight of the social and political dynamics of alienation, ethnocide and discrimination. Promoting mutual respect, recognition and tolerance, and most importantly the undoing of anti-Muslim state propaganda and the majority's internalized racist thoughts and actions are must-address issues. (Asia Sentinel by Sai Latt a PhD candidate at Simon Fraser University in Canada)