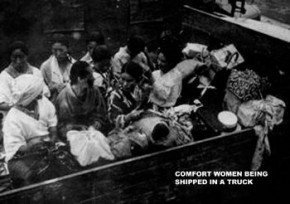 No, the comfort women tragedy won't go away

Nobody however has managed to get into as much hot water over this issue as Osaka Mayor Toru Hashimoto, who doubles as the co-leader, with former Tokyo governor Shintaro Ishihara, of the new Japan Restoration Party, the third largest party in parliament.

Ever since he opined with Osaka reporters and on social media that the comfort woman system was a necessary adjunct to the Japanese war effort in early May, the Japanese press has maintained a steady drumbeat of stories and opinions taking Hashimoto to task, and leading to speculation that he might resign as party leader.

Hashimoto had compounded his problem by linking history to the current situation of US forces stationed in Okinawa where, during a recent visit, he claimed to have felt a “strong sense of crisis” about behavior of American forces stationed on the island.

Introduced to the commander of the Marine air station at Futenba, he advised him to make better use of the “legally accepted adult entertainment industry” to satisfy soldiers’ needs. It is not known how the Americans reacted to this high-level politician’s seeming to suggest that they should institute a comfort system for their troops. After all, prostitution is illegal in the US and has been illegal in Japan since the 1950s.

The meeting and his remarks there that took place May 1 might have stayed private except that Hashimoto himself later boasted of his encounter with Osaka journalists and described it on his own Twitter account, which is read by about a million people. “Hashimoto ratted on Hashimoto” said Michael Penn, editor of Shingetsu News Agency.

Hashimoto misjudged how his remarks would be received in an audience wider than the more extreme nationalists or that it might harm relations with the US, he said. While many Japanese conservatives dislike how history has judged Japan’s wartime aggression (many deny the accuracy of that term), they still value the alliance with the US.

The behavior of American military personnel in Japan and especially on Okinawa is a touchy subject. The American high command is intimately aware that any misbehavior can literally endanger the alliance. Whenever one occurs, the military goes into overdrive: mass restrictions to base, curfews, mandatory lectures on how to behave and, if needed, abject apologies from generals, admirals and the ambassador.

The worst incident in recent memory was the gang-rape of a young Japanese girl in 1995, which sparked massive demonstrations and led to an agreement to move thousands of Marines from Okinawa to Guam, an agreement that has yet to be fulfilled because of impasse concerning moving the Marine air base at Futenma to a new location.

Cases of rape on Okinawa and elsewhere in Japan are rare and quickly punished. Two American sailors were convicted in 2012 and given 10-year sentences in Japanese prisons. More common are simply the daily irritants that come from living among large numbers of foreign servicemen: aircraft noise, traffic jams, bar fights and petty crime.

Some harsh criticism of Hashimoto from the US alarmed the government of Prime Minister Shinzo Abe, already facing criticism of its own from Washington, Seoul and Beijing over the April visits to the Yasukuni shrine by several cabinet officers and numerous members of parliament. “The [comfort] system cannot be pardoned,” he said.

Former US Ambassador Thomas Schieffer (brother of the well-known newscaster Bob Schieffer) said that nobody in the U.S. would accept any attempt by Japanese officials to justify wartime brothels. Many American newspapers used the term “sex slaves” rather than the euphemistic “comfort women” to describe the system of wartime brothels.

In the wake of the controversy, Hashimoto cancelled a planned trip to the United States, including San Francisco and New York, as there was the real possibility that he would be snubbed by the mayors of the two cities. San Francisco Mayor Ed Lee, a Chinese-American, has also complained about Hashimoto’s remarks.

The governing Liberal Democratic Party allies with another smaller party called New Komeito, but it is no secret that Abe is interested in cooperating with Hashimoto’s party to pass amendments to the constitution which, among other things, would alter or repeal the famous “no war” clause. Hashimoto is on record favoring such a move.

The incident showed that Hashimoto, despite his conservative and nationalistic leanings, had not assimilated the usual conservative talking points about the comfort woman issue. They cannot deny that the brothels existed; that’s documented. They cannot easily argue that no woman was forced into prostitution. There are still many living today that can testify otherwise.

No, they basically maintain that there is no proof of direct involvement by the Imperial government in recruiting and managing the comfort stations, an area where the facts are a little more obscure and subject to sometime ambiguous arguments (did moving the women around on army trucks constitute state involvement, for example?)

Meeting with the international press, Hashimoto demonstrated that he has absorbed this point as he dismissed the idea that the Japanese government was directly involved. He repeated this argument in answer to practically every question posed by the foreign press (Abe holds pretty much the same position but is not, for the moment, interested in pushing it.)

The Japanese government’s official position on the matter was laid out in 1993 in a much-massaged Kono Statement named after then chief cabinet secretary Yohei Kono which apologized for at least indirect government involvement. The ambiguity of the statement is a source of continuing controversy with South Korea.

Shortly after assuming office in January, Abe told parliament that his government will stand on the Kono statement and not seek to revise it. During his first term in 2007, Abe did in fact raise questions about direct state involvement in comfort stations, which among other things prompted the US House of Representatives to pass a resolution urging Japan to formally apologize. Asia Sentinel