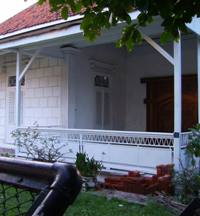 In January 2009, Muslim demonstrators sealed off Beth Shalom and burned an Israeli flag to protest the country’s attacks on the Gaza Strip at the time.

The last vestige of one Indonesia’s oldest and largest Jewish communities is now just a pile of rubble. Beth Shalom in Surabaya — Java’s one and only synagogue — was demolished in May after being sealed off by Islamic hard-liners in 2009. “It was designated a heritage site by the Cultural Heritage agency on April 16, 2009. It should’ve been protected.

A small, Dutch-style building located on a 2,000 square meter plot of land in the middle of Surabaya’s business district, Beth Shalom looked like an ordinary house in the neighborhood. The only features that distinguished it as a synagogue were its mezuzah (Torah scrolls fastened to an entrance way) and the two Star of David carvings on its door. “There were many artifacts inside the building which can’t be found in other heritage sites.


So, the Cultural Heritage site that also happened to be a synagogue is no more. Would any muslim build a house and live in it, knowing what was there before? Best not knowing, I bet.

By official records only about 20 Jews live in Indonesia; all Indonesian or Dutch forums advice Jews not to mention they're Jewish or have Israeli passport to anyone, including authorities.
Indonesia’s last surviving synagogue is located in Manado, Sulawesi.