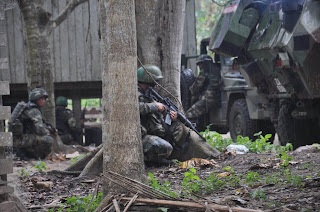 Kuala Lumpur. Malaysian authorities Saturday announced that an operation to flush out armed Filipino militants from an eastern state was over, four months after the intruders landed on Borneo island sparking a security crisis.

More than 200 armed followers of a self-styled sultan from the southern Philippines landed in the state of Sabah in February, reviving a centuries-old land claim by the long-defunct Sulu sultanate.
Fighting between the militants and security forces — deemed Malaysia’s worst security crisis in recent years — killed at least 68 Filipinos and 10 Malaysian security personnel.

Musa Aman, chief minister of Sabah state, was quoted by The Star online as saying the operation to chase scattered militant remnants and their sympathisers who were in hiding had ended.
But a security zone has been set up with troops permanently stationed along the coastline where the gunmen landed — previously known for its lawlessness and lax border control.

For centuries, people have moved back and forth across the porous sea border separating Sabah and the adjacent southern Philippines.

The security breach aroused heated sentiments on both sides with many Malaysians outraged over the incursion, while the Philippines came under pressure to protect its citizens’ lives.
Scores of Filipinos captured as part of the operation have been charged in Malaysian courts, including with terrorism-related offenses. Agence France-Presse