Asia yet to earn its future 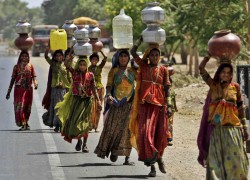 Asia’s rise as an economic force over the past 40 years is one of the most successful development stories of modern times. If Asia can continue to expand at the robust rates of recent history, it could account for more than half of global output in 2050

Average per-capita incomes could rise above US$40,000 (in constant purchasing power parity terms), similar to that of Europe today, and there may no longer be any poor countries in Asia.

In many ways, what we are witnessing is not the ‘emergence of Asia’, but the ‘re-emergence of Asia’. In 1820, Asia accounted for just under 60 per cent of total global output, with China and India together accounting for nearly half of global GDP. This was followed by nearly two centuries of economic decline in Asia, ignited by the European industrial revolution—a trend that has now been reversed. Embracing economic openness and structural reforms, China and India have rapidly re-emerged as key engines of the global economy. Indeed, across the region countries from Cambodia to Indonesia are participating in the robust economic expansion that has helped lift hundreds of millions out of abject poverty. Yet, a number of developing economies in the region are still mired in low or modest growth rates. As a result, the region’s much-touted prosperity is still mainly confined to East Asia. The Asian century will not be realised unless its growth is broadly based and its prosperity also extends across South Asia, Central Asia and the Pacific Islands.

Given Asia’s diverse and complex social and economic landscape, its rapid yet uneven rise offers both significant challenges and important opportunities. So Asia’s future success has to be earned.

If this is to be Asia’s century, then it must tackle both the near- and long-term challenges that lie ahead. Policies that were effective in the past when Asia was largely a low-income, capital-scarce region are less likely to be effective in the future.

Asia needs to lift its remaining millions out of poverty, and the pattern and quality of growth will be important. If growth continues to increase inequalities and polarisation within countries, then social cohesion will be at risk. Rising inequalities between countries could result in mass migrations or even conflict. A number of countries are also finding it difficult to break out of the middle-income trap. So they need investment in human capital and R&D to make the transition from ‘catch-up’ to ‘frontier’ entrepreneurship. Some countries, like China and Japan, have to prepare for ageing populations, while others need to find fruitful and satisfying employment for their rising working-age populations. Populous countries like India stand to benefit from the demographic dividend only if sufficient jobs can be created to absorb their growing labour force. If they fail, massive unemployment and associated social ills are the likely result. A lot of Asia’s future growth, perhaps up to 75 per cent, will be generated in urban centres, and it is estimated that Asia’s urban population will likely double to three billion by 2050. Rising urbanisation, and the stress that it imposes on its cities, is another significant challenge requiring early planning.

All of these issues need to be addressed within the overarching ambit of environmentally sustainable growth as the race for resources gathers pace. The real crisis that the world needs to worry about is not the next economic or financial meltdown but one where population growth leads to conflict resulting from competition for scarce and dwindling resources, exacerbated by an increase in the frequency and severity of natural disasters. Food, clean air, drinking water and arable land would all be hotly contested.

Asia’s coming of age signals an inevitable change in the global economic and political order. While this shift has been long anticipated, world economic and political governance has yet to adjust to these developments. The elevation of the broader G20 to guide the world economy, replacing the G7, heralds a new beginning. But Asia still needs to prove it can be a responsible partner in the global agenda. As its influence increases, Asia must take greater ownership in preserving the global commons, and be seen to act as a responsible global citizen. Regional and global dialogue that fosters conflict-avoiding cooperation will be important factors in sustaining the region’s growth and development.
The signs are that Asia will rise up to face these challenges and that this will indeed be the Asian century. But the Asian century is not just Asia’s century — it should be a century of shared global prosperity. While the opportunity-cost to Asia of failure is high, it will also affect the rest of the world. Realising the Asian century is in all our interests.

Jayant Menon is Lead Economist at the Office of Regional Economic Integration, Asian Development Bank (ADB), and Adjunct Fellow at the Arndt-Corden Department of Economics, Australian National University.
This article appeared in the most recent edition of the East Asia Forum Quarterly, ‘Coming to terms with Asia’.