Asia-Pacific and a Common Defense 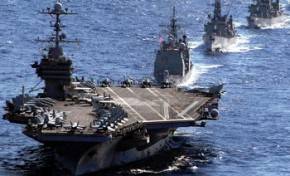 Functional security organization needed for survival in the 21st century

While serving as US Secretary of State, Hillary Clinton was said to have considered evolving NATO to address the Pacific, thus creating, or at least modifying the organization. Little emerged from the hypothetical "Pacific–Atlantic Treaty Organization." However, the need to establish a functional security organization in Asia-Pacific remains present. Although history has not been kind to such propositions - recall the Southeast Asian Treaty Organization (SEATO) that predated ASEAN  - and obstacles remain many, the establishment of a regional security organization should not be abandoned.

In common defense
International forums such as APEC, ASEAN and its many derivatives allow for member states to gather and engage in dialogue. They are, however, ill-equipped to address and resolve pressing security concerns such as maritime and territorial disputes. Although an argument for the United Nations could be made, given the broad and extra-regional nature of the UN, it is unlikely to establish much headway in Asia-Pacific, to say nothing of potential Chinese resistance.

An Asian-Pacific security organization should be just that - Asian-Pacific, and dedicated to the preservation of peace and security in the region. As such, any proposed "Pacific Security Treaty Organization" (PSTO) should function as a separate and independent agency, rather than being part of an existing organization. Not unlike the European Defence Agency of the European Union, a PSTO should establish and develop defense cooperation between member states based on a common foreign and defense policy (not unlike the EU’s Common Foreign and Security Policy).

Yet, for all the ground that has been broken on establishing a multinational defense organization, transporting and implementing a set of ideas from one part of the world to another will not be so easily achieved.

SEATO, established as collective defense against the spread of communism during the Cold War, lacked the necessary command structures to provide for collective action, and failed to bridge the cultural and linguistic divides of the member states. Moreover, it suffered from the member states’ indifference. If the hypothetical PSTO were to move beyond the planning stage, it must rectify those issues that SEATO failed to resolve. It must rise to become more than "NATO of the Pacific."

Today, threatening peace and security in Asia-Pacific (and Southeast Asia in particular) is not the spread of communism but competing interests. Less ideological and more economics, there is a desire among Asian-Pacific states to be more than a source of cheap labor for the West. China, specifically, has grown increasingly assertive as it seeks to take its place on the world stage and, in doing so, has begun to flex its diplomatic, economic, and military muscle in conjunction with its maritime and territorial claims, much to the alarm of many neighboring states.

No longer is the Asia-Pacific home to impoverished nations struggling to get by. Rather, it has become one of the most dynamic regions in the world and its rising political and economic importance will only cause resident states to compete for their share of the pie. Now more than ever, there is a need for a common foreign and defense policy, and an organization to advance and protect said policy.

Searching for unity
Who then should be included in PSTO? Ideally, any such security organization should comprise ASEAN states such as Indonesia, Malaysia, the Philippines, Singapore, Thailand, and Vietnam; as well as prominent states such as Japan, South Korea, and Australia. The United States would necessarily play an advisory, if not leading, role in its establishment. However, the organization should not surrender itself as a tool of American foreign policy. Partnering states should include NATO and the EU; and China, Russia, and India should be invited as observers.

The challenge then becomes addressing those very same problems that faced SEATO: linguistic and cultural differences, and establishing a joint multinational command structure. Additionally, the organization must also take into consideration the interests of each member state, which may or may not be shared by other member states.

In this globally connected world, it has become easy, or at least somewhat accessible, for people from different countries to meet new people from different backgrounds. The Internet and social media sites have erased national boundaries. Still, the world is far from free as countries such as China and Vietnam continue to monitor and even censor online activities of its citizens. It is not these curious citizens who are leading the country, but rather the officials censoring the people that are dictating policy, thus creating the very divisions that must be bridged.

As such, the importance of establishing a common policy cannot be underestimated. If PSTO is to succeed, it cannot allow member states to go their own way. If PSTO were to become another multilateral forum espousing the "ASEAN way" then the organization has already failed. What would be required from each member state is a willingness to act as a collective and search for a common identity - PSTO, Asian, or otherwise. Difficult as this might be - especially when considering the competing interests of potential member states, particularly with regard to the South China Sea disputes - it would be necessary that member states confront and overcome differences. Agreeing to disagree could not be a solution with PSTO.

Regardless of the name or organizational structure of any planned or hypothetical defense group in Asia-Pacific, there must be common foreign and defense policy to bind member states. There must be shared values and beliefs to give member states something worth striving for. Without this common policy, and without a collective will, PSTO or any similar organization would be doomed to fail.

(Khanh Vu Duc is a lawyer and part-time law professor at the University of Ottawa who researches on Vietnamese politics, international relations and international law. He is a frequent contributor to Asia Sentinel.)