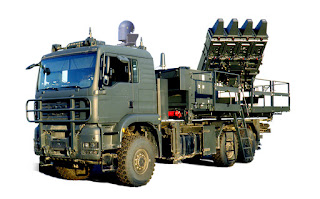 SPYDER's truck-mounted Missile Firing Units (MFU) are equipped with both IIR and RF missiles. The MFU carries any combination (IIR/RF) of four missiles on a rotatable launcher assembly. The system's high mobility allows quick deployment and operational agility. The SPYDER System has 360° engagement capability during day or  night and under all weather conditions. The SPYDER System can engage multi threats simultaneously. It has Lock-On-Before Launch (LOBL) and Lock-On-After Launch (LOAL) modes of operation. The intercept envelope of the SPYDER system spans from less than 1km to 15 km, against targets flying at altitudes between 20 m and 9,000 m.

SPYDER's highly modular structure allows simple adaptations to customers’ platforms and future growth. A standard SPYDER missile battery has up to six missile firing units per battery and a command and control unit.

The truck-mounted Command and Control Unit (CCU)  comprises the Elta EL/M 2106 ATAR 3D surveillance radar. The surveillance radar has advanced ECCM capabilities and can simultaneously track multi-targets. Wireless data link communication enables deployment of the MFUs at a distance from the CCU. The CCU is also capable of operating with neighbouring SPYDER air defence batteries and share information with higher echelons. This interoperability capability provides the SPYDER air defense system with high flexibility in combat situations.
Notorious for dragging its feet on defense modernization, the Philippine government may finally be putting its money where its mouth is thanks to a territorial dispute with China and the belief that the U.S. is unwilling to come to its defense.

According to media reports, the Philippine military intends to procure surface-to-air missiles (SAM) and multiple-launch rocket systems (MLRS) from two Israeli defense contractors. And this time, it seems to mean it.

An unnamed source told the Manila Standard, late last week that Philippine Defense Secretary Voltaire Gazmin could head for Israel this week to sign agreements with the two firms, which have been identified as Rafael Advanced Defense Systems Ltd. and Israel Military Industries Ltd. (IMI).

Once an agreement is signed, the systems could be shipped to the Philippines within three to six months, the report said. It added that the acquisition would constitute the country’s first-ever air defense capability. The systems would be deployed in the West Philippine Sea, but the report did not elaborate on any other details.

Undersecretary Abigail Valte, a spokesperson for the Presidential Palace, has refused to confirm or deny the planned acquisition. However, Communications Secretary, Ricky Carandang, confirmed on June 15 that the proposal had reached the Palace.

As part of its air defense products, Rafael is known for its Spyder short- and medium-range defense system, the Iron Dome, as well as the Stunner (a.k.a. “David’s Sling”). For its part, IMI is the maker of the Lynx MLRS, among others.

As of the publication of this article, e-mail queries to Rafael and IMI have gone unanswered.
Another source told the Standard that while the procurement plans had been floated for some time, no progress had been made for lack of willingness on Manila’s part to make the necessary capital investments. However, the territorial dispute in the resource-rich South China Sea — or the West Philippine Sea, as Philippine media refer to it — appears to have focused minds in Manila.

Another factor appears to be Manila’s displeasure with Washington’s “neutral stance” on the Philippines’ dispute with China, with some voices within the Philippine defense community accusing the U.S. of failing to abide by the Mutual Defense Treaty. If Manila cannot count on its longstanding ally to come to its rescue when the going gets rough with its much larger neighbor, then alternative options might be the way ahead, some are saying.

China claims almost the entirety of the South China Sea and has become more assertive in recent years. In 2012, vessels from the Philippines and the People’s Liberation Army Navy faced off for nearly two months over the Panatag (Scarborough) Shoal, which is located approximately 220 km west of Luzon. China has also been building or expanding military air strips in the South China Sea, including a reported project at Subi Reef near Pag-Asa Island in the Spratlys, about 20 km from the Philippines’ administrative headquarters for the area of the archipelago that it claims as part of its territory. China also has an airstrip on Yongxing Island, or Woody Island, in the Paracels, which can accommodate transport and fighter aircraft, including the Sukhoi Su-27 and Su-30MKK.

Aside from China, Taiwan also has territorial disputes with the Philippines, particularly over islets in the Spratlys, where Taiwan has built a 1,150 meter airstrip on Itu Aba (Taiping Island) and which it plans to extend. Tensions also escalated between Taipei and Manila following the killing of a Taiwanese fisherman on May 9 by Philippine coast guards in disputed waters between the two countries. The incident prompted a series of exercises by the Taiwanese Navy, Coast Guard and Air Force in the area, maneuvers that immediately highlighted the shortcomings of the Philippine armed forces.

Both China and Taiwan have the ability to conduct airborne maritime surveillance of disputed areas in the South China Sea using manned and unmanned aircraft, and to quickly establish air superiority during hostilities. Absent a credible air deterrent, the acquisition of air defense systems seems both appealing and logical for Manila, though some critics have argued that the Philippines should dedicate more energy to developing its naval forces.

President Benigno Aquino III released P75 billion (US$1.74 billion) to fund a military upgrade program — mostly for the procurement of ships and aircraft — during his first year in office. It remains to be seen if his administration will move ahead with the Israel deal. But the circumstances, from fears of abandonment by its ally to Beijing’s intransigence in its territorial disputes, could force Manila to finally make the jump. The Diplomat