Withdrawing from Afghanistan - The big retrograde 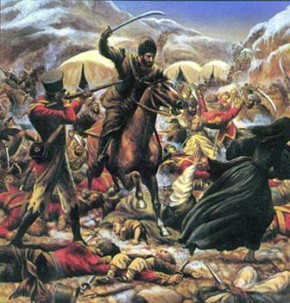 Logisticians face a practical and geopolitical mess, with relish

AMERICAN commanders are fond of the saying that amateurs discuss tactics, while professionals discuss logistics. Theirs may not be the most glamorous designation in the army, but logisticians take pride in knowing that nothing works without them. This summer the discipline finds itself in an unaccustomed spotlight in Afghanistan, as the Americans attempt what they are calling the greatest feat of military transport in modern times. Nearly 12 years after their war began, they are packing up their colossus, checking they have all the bits and bobs, and shipping it home.
Barack Obama says he is still deciding how many American troops to keep in the country after NATO’s combat mission expires in 2014. No doubt it will be a tiny fraction of today’s total. In the next 18 months America expects to remove as many as 28,000 vehicles and 40,000 shipping containers of equipment. In military jargon, the whole action is “the retrograde”.
Shifting that much kit, with an estimated value of $30 billion, is daunting enough. The retrograde itself will cost as much as $6 billion and involve about 29,000 personnel, for the American part alone (each of the 50 coalition countries is responsible for its own logistics). The job is unprecedented in complexity; compared with Iraq, the region’s terrain and politics make it a mover’s nightmare.
The biggest problem, says Major Bradley Sines of the 1st Theatre Sustainment Command, is that for the first time America finds itself fighting a war without a reliable seaport. From Iraq there was easy access to Kuwait. Afghanistan’s landlocked borders put the nearest usable port in Karachi, in Pakistan, which can be reached only by crossing the Khyber Pass in the east, or at Chaman in the south.
Uneasy relations between national governments have become the worst pitfall of those routes. Pakistan shut them to NATO supplies completely for seven months in 2011 and 2012, in reproach for an American air strike that killed 24 Pakistani troops. Nearly a year after it reopened, the backlog that resulted has yet to clear. Some containers are stuck in a logistical limbo, waiting to enter Afghanistan even after their intended recipients have finished their tours and gone home. Avoiding further chaos has become a diplomatic priority. Even when the border is open, lorries have found themselves prey to Taliban insurgents and bandits on both sides.
The difficulties of the southern route have spurred the search for an alternative. The “northern distribution network” crosses from Afghanistan into Uzbekistan, branching through the Central Asian republics and onwards, along a Soviet-era rail system, to the Black Sea, the Baltic Sea and Europe. The route is safer and less volatile, but also slower and far more expensive. Perhaps its biggest drawback is Central Asian bureaucracy. One senior general moaned that NATO is struggling to get more than two containers a day across the border at Hairatan because of the Uzbeks’ insistence that everything be unpacked and checked. Hence America still expects to ship four-fifths of its equipment via Pakistan. (Weapons are all flown out.)
To reach any border, convoys of lorries must contend with Afghanistan’s treacherous roads. A particular weak spot is the 3,900-metre-high Salang pass, which joins the north and south of the country. Prone to avalanches in winter, the road is in poor condition all year. “It’s pretty bad and it’s getting worse,” says one logistician. In March the Afghans promised to spend $11m on repairs.
A final unknown is how the Taliban will react. Cargo trains make tempting targets, and some outbound convoys have already been attacked. Commanders are loth to reassign troops to their protection, when it would mean diverting them from building up the Afghan forces.
The retrograde is to reach its peak flow later this year. By summer more than 1,000 vehicles will leave each month, and perhaps twice as many containers. Already each month another 500 filthy vehicles queue outside the echoing warehouses of the 401st Army Field Support Brigade at Bagram airfield, near Kabul, waiting to become freight. Eight other sorting yards are scattered around Afghanistan.
This unending procession of lumbering armour must be cleaned, stripped of munitions, loaded and secured for shipping. Each mine-resistant vehicle, for instance, is itemised as 17 different components, from turret to on-board computer, each piece to be logged separately. About 1m items are in the system. Some will be sent to other parts of Afghanistan, but 90% are bound for American bases overseas.
As well as vehicles there are generators, tents, and all the baggage accrued by a force more than ten years in the field. Lieutenant-Colonel Todd Burnley, the battalion’s commander, says the strangest item to turn up so far has been a tuba.
Not only will this be the biggest feat of its kind, it may also be the last for some time. The military movers reckon that America’s latest defence cuts and war weariness will see to that. All the more reason, they say, to appreciate this demonstration of the logistician’s art. The Economist