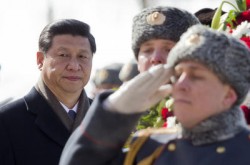 Vladimir Putin has turned to foreign policy as a means of preserving the status quo as he faces increasing domestic discontent.

Long before Obama made his ‘pivot’ to Asia, therefore, Moscow had announced its turn to the east.

But does this intention have any real substance, or is it merely a façade? And what part will this Russian ‘pivot’ play in the Kremlin’s attempts to maintain the current internal and international order?

Three clear features define Russia’s foreign policy in Asia. First, the Kremlin has not learned how to operate within a multipolar system of international relations. It has focused on one big player — China — and has neglected other countries in the region. Second, Russia’s foreign policy is oriented toward internal objectives. So the ruling elite has not drawn up a consistent policy for relations with Asia as a region or with individual countries other than China. And, there is always the possibility that, as the Putin regime weakens, the Kremlin could use several Asian countries as a policy ploy to pursue a domestic agenda. Third, because Putin’s foreign policy is all about political survival, it has no modernising dimension. For these reasons, Putin’s Asian fling is likely to end in mutual estrangement, disappointment and perhaps even hostility — but Russia’s relationship with China will be central to whichever scenario plays out.

China’s weight and power, plus the familiar style of its authoritarian regime, make it a natural magnet for Russia’s elite. China was a country of interest in Soviet times, but this focus diminished when Russia attempted integration with Europe. Russia later renewed its interest in China in the mid-2000s, when Russia’s relationship with the West soured.

Different approaches to China have emerged in Russian political circles since then. Pragmatic realism dominates the official line of building a ‘strategic partnership’ with China. There is an anti-American dimension to this partnership, but it also reflects a genuine desire in Moscow for mutually advantageous economic cooperation with Beijing. At the same time, some in Russia have expressed a growing fear of Chinese expansionism and Russia’s possible transformation into China’s ‘junior partner’.

At first glance, Russia’s declining relations with the West seem to lay a solid foundation for a partnership with China. Several features of the relationship support this, such as active bilateral trade and military cooperation. But strategic partnerships are not just about the convergence of certain interests; they are about the fundamental principles of internal and international order. One can question whether a Russia–China partnership is compatible with the different issues facing the two countries, such as modernisation, democratic transformation and their respective power statuses.

A strategic partnership between a rising China and a declining Russia would most likely result in China turning Russia into a tool of its own agenda. There are only three possible developments that could help Russia avoid this fate: if China sinks into stagnation and crisis; if the United States steps up its role in the Asia Pacific; or if Russia undertakes democratic transformation and turns toward Europe.

Other factors further undermine such a partnership. Relations between authoritarian regimes are almost always marked by mutual suspicion, so conflict is a possibility. The asymmetry of Russian and Chinese power is another issue. This has not spoiled the relationship yet, but it could at some point in the future.

Importantly, a Russia–China alliance may not work because, despite both countries’ growth and apparent political stability, their authoritarian regimes may be heading to their ends. Many regimes have projected an outward semblance of stability when in reality they are in their death throes. Many economic booms have also collapsed, and many friendships between countries have ended in conflict. China and Russia are the last remaining authoritarian countries with global influence today. The fate of these regimes will have a big impact on authoritarianism in other countries. They will shape foreign policies and the geopolitical landscape of the Eurasian and Pacific regions, but also the world order in general.

From the Russian liberals’ perspective, authoritarian Russia’s partnership with authoritarian China is a way to prop up Russia’s decaying system. This doesn’t mean that friendly relations and economic cooperation should be rejected, but that the consequences of these relations for both countries’ internal developments and objectives need to be examined. So far, the Kremlin’s call to turn eastwards is only creating another prop for Russia’s archaic system of government.

Continued authoritarianism will only keep Russia on a course for decline. China’s authoritarianism is in a better position because the Chinese elite has shown an ability to adapt to changing realities and a willingness to pursue economic liberalisation. But Chinese authoritarianism too could fail because it limits society’s freedoms. If authoritarianism in both countries continues to decline, we will need to examine the regional and global consequences of this process. It would be good if both societies can peacefully transform their regimes, but they may not. They may end up facing the prospect of state collapse, and the effects of this would ripple throughout the entire region.

It is not enough to analyse the outward signs of the Russia–China relationship; rather, it is necessary to examine the links between their domestic and foreign policies and the interaction between their internal dynamics and the global environment. Today’s world is interdependent, and understanding this fact protects people against illusion and myth. The first step to better understanding the future of Russia, China and the global balance would be to demystify the Putin regime’s relations with the world and with Asia in particular.