What to expect from Australia’s 2013 Defence White Paper 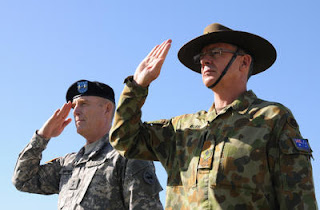 This year, for the third time, Canberra will try to work out what the rise of China means for Australia’s defence policy
The first try, in John Howard’s 2000 white paper, was overtaken by 9/11 and the War on Terror. The second try, in Kevin Rudd’s 2009 white paper, managed to anger China by identifying it as a growing threat, without proposing any effective response to the strategic issues that China’s rise actually poses. Now it’s Julia Gillard’s turn.

The circumstances are not propitious. The faltering Gillard government, facing a very difficult election in an awkward fiscal position, is not in the best position to make sensible long-term choices about defence policy, especially if they might involve spending a lot more money. Nor will they be willing to honestly acknowledge that the only alternative to spending more money may be to just sit tight and hope for the best, New Zealand fashion.

So the Gillard government will try to avoid both these unpleasant alternatives, and it is already clear how they hope to do it. They will argue, or assume, that any tension caused by China’s rise will be peacefully negotiated between Washington and Beijing without any major changes in Asia’s strategic order. Australia therefore faces no new strategic risks, and will not need its armed forces to do anything more than they have done in the past few decades. So there is no need to expand or reconfigure the Australian Defence Force (ADF), and no need to spend any more money. This argument has already been foreshadowed in the Australia in the Asian Century White Paper issued late last year and the National Security Strategy released in January.

How credible is this as a basis for defence policy? It is perfectly possible that the United States and China will reach a new, stable modus vivendi under which they can live in peace with one another and keep Asia peaceful too. But if they do, it will result in a new regional order very different from the status quo of the past 40 years. And it is far from certain that they will succeed in this, because over the past few years the trends have pretty clearly been in the opposite direction.

Despite their economic interdependence, strategic rivalry has escalated as the United States strives to hang on to its primacy in Asia, and China tries to displace it. Australia’s diplomatic policy should be to do all it can to reverse this trend and promote the kind of power-sharing deal that alone would provide a basis for long-term stability. But the job of defence policy is to consider what might happen if this strategy does not succeed.

Escalating US–China rivalry already presents Australia with strategic challenges very different from those it has known since the Vietnam War. It was soon after Nixon’s visit to China established uncontested US primacy in Asia that Australia decided that its armed forces needed to be able to do nothing more demanding than defend the continent against minor attacks from Indonesia. That has worked well for Australia since then, but as this era passes the potential demands on its defence forces are likely to grow — and the further US–China rivalry escalates, the bigger these potential demands will become.

If Australia wants to exercise any strategic weight in a more contested Asia, whether to help sustain a stable regional order or just to look after itself, the ADF will have to be able to do a lot more than it can do now, either to support the US militarily, or to operate independently of it. This would require a radically different force structure and a much bigger defence budget than anyone in the government — or the opposition — is now considering. It would also require a much clearer idea of the strategic interests that Australia really needs to protect in Asia, and how it could do that.

It seems almost certain that this year’s white paper will consider none of this. Instead, it will probably take Australia’s defence policy backwards. In response to China’s rise, Howard’s 2000 white paper proposed a significant but measured expansion of Australia’s strategic objectives beyond the narrow defence of Australia and its immediate neighbourhood, which it adopted in the aftermath of Vietnam. Rudd’s white paper in 2009 went much further in talking up the China threat, but actually pulled Australia’s strategic objectives back from Howard’s 2000 concept, focusing again closer to home. Gillard’s 2013 model will likely retreat further still, essentially taking the country back to the Defence of Australia polices of the 1970s and 1980s.

The attractions are obvious. First, it avoids spending more money on defence. Second, by walking away from Rudd’s talk of a China threat, it placates Beijing and dampens Washington’s expectations that Australia will be doing anything substantial to support President Obama’s military ‘pivot’ to Asia. Third, it reassures Australia’s neighbours, especially Indonesia.

The downside is that if strategic rivalry between the United States and China does escalate, Australia will find itself facing a strategic crisis quite different from anything it has contemplated for the past 40 years, and which will be quite beyond the capacity of the armed forces that have served it well enough over that time.

Hugh White is professor of strategic studies at the Strategic and Defence Studies Centre, the Australian National University. He was the principal author of the 2000 Defence White Paper.